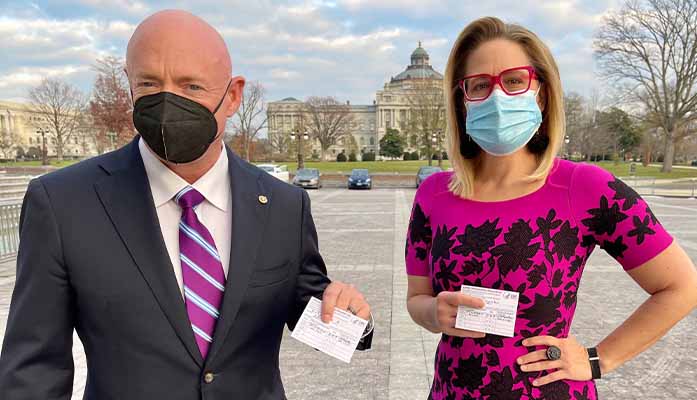 On Tuesday, Arizona Senators Kyrsten Sinema, and Mark Kelly voted in favor of a piece of legislation, S.1, which would have grabbed power over elections away from the states. S.1 would have banned requiring photo I.D. to vote, expanded ballot harvesting, and require taxpayers to fund political campaigns.

The duo joined the other Democrats in support of the bill. However, all Republicans voted to filibuster the bill, effectively killing it.

It was Sinema and fellow Democrat, Sen. Joe Manchin that preserved the filibuster for just such an occasion.

Our statement on the #ForThePeopleAct pic.twitter.com/UWeZ9WFeJo

The #CorruptPoliticiansAct provides welfare for politicians with a 6-to-1 match of campaign donations with taxpayer money.

S. 1 is an unprecedented power grab & a blatant attempt by those who are in power–by the slimmest margin possible–to overhaul & rewrite election laws for all 50 states in one fell swoop. Yesterday, I addressed Democrats’ misnamed “For the People Act” on the #Senate floor. pic.twitter.com/U9KKNPrE20

This is a bad bill. I oppose it vehemently.

S.1 was written by one party acting alone.

S.1 was steered through Congress by one party acting alone.

The danger of such extreme changes being made by such tiny, partisan congressional majorities should be clear to everyone.

MCCONNELL: The biggest lie being told in American politics has been that the states are involved in a systematic effort to suppress the vote. That’s not happening. As we all know, we had the biggest voter turnout last year since 1900. pic.twitter.com/wrONnJTJpq

Senate Democrats are pushing a false narrative that S.1 is about voting rights. Do not be fooled. This bill is about Dems grabbing for power, forcing taxpayers to finance political campaigns, and making our elections less secure.

S.1 is a power grab that would effectively nullify state voter ID laws, mandate public funding of political campaigns, and transform the Federal Election Commission into a partisan body empowered to limit free speech. This is a bad bill, which is why I voted no.

“The Democrats’ S. 1 is an unprecedented partisan power grab that seeks to undermine the sanctity of the ballot by codifying a federal takeover of local elections. The Democrat politicians act seeks to eviscerate widely supported voter ID requirements and use taxpayer dollars to bankroll political campaigns,” GOP Chairwoman Ronna McDaniel said in a release. “Americans understand states should run their own elections — not unelected bureaucrats in Washington, DC. As Democrats continue their assault on election integrity, the Republican Party remains committed to making it easier to vote and harder to cheat.”