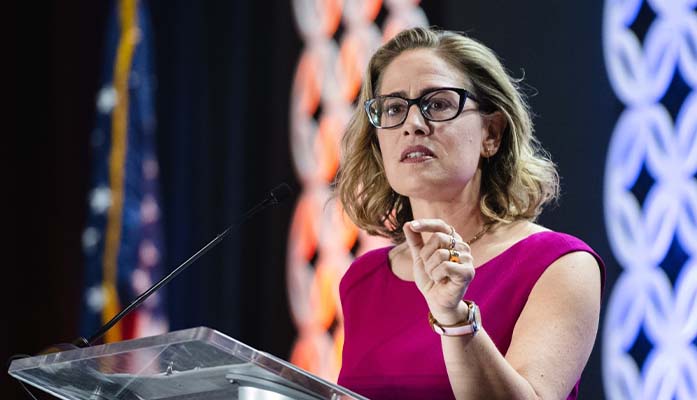 Within hours of U.S. Senator Kyrsten Sinema’s announcement on Friday that she is now a registered independent voter, posturing began for the 2024 election as the public learned just how deep the divide is within the Arizona Democratic Party.

Sinema took part in multiple media appearances to explain her decision, stressing her bipartisan efforts and focus on being an “independent voice” as Arizona’s senior senator despite being the Democratic nominee in 2018 against then-Sen. Martha McSally.

“Removing myself from the partisan structure — not only is it true to who I am and how I operate, I also think it’ll provide a place of belonging for many folks across the state and the country, who also are tired of the partisanship,” Sinema said.

In another statement Friday, Sinema noted her independent minded approach “is rare in Washington and has upset partisans in both parties,” but she believes it is “an approach that has delivered lasting results for Arizona.”

Sinema’s sentiment that she has well-served her constituents is not universally shared by Democrats back home, where her lack of enthusiastic support for many Democratic candidates in the 2022 election cycle, including Secretary of State Katie Hobbs’ run for governor, caused frustration for the Arizona Democratic Party.

Friday’s defection announcement was met by a good riddance style statement from state party leaders, who said everything except don’t let the door hit you on the way out.

“Senator Sinema may now be registered as an Independent, but she has shown she answers to corporations and billionaires, not Arizonans,” the statement read. “Senator Sinema’s party registration means nothing if she continues to not listen to her constituents.”

Some of Sinema’s votes in past years vexed key party leaders, but the discontent remained mostly under the surface until January. That is when the Arizona Democratic Party’s executive board censured Sinema for opposing changes to the Senate’s filibuster rules so that Democrats could push through voting rights legislation in advance of the 2022 election cycle.

If Sinema seeks reelection in 2024, a run as an independent allows her to avoid a rough primary such as one U.S. Representative Ruben Gallego has been suggesting for months that he plans to put forth. Gallego issued a statement Friday that promoted his donation webpage while criticizing Sinema.

Meanwhile, U.S. Rep. Greg Stanton decried suggestions that Sinema’s decision was somehow connected to a “post-partisan epiphany.” Instead, the former Phoenix mayor said it was “about political preservation” in light of Sinema’s recent polling numbers.

Sinema’s voter registration switch ensures far-left Democrats will lose any foothold they expected to have after the recent Georgia runoff gave Democrats a slim 51 to 49 majority in the Senate. However, she is expected to retain all of her committee assignments from Majority Leader Chuck Schumer, the Senate’s top-ranking Democrats.

Unlike fellow independents Sen. Angus King (Maine) and Sen. Bernie Sanders (Vermont) who formally caucus with Democrats, Sinema says she does not plan to caucus with any party.