Kyle Rittenhouse told Louder With Crowder (LWC) on Wednesday that Arizona State University (ASU) wasn’t honest in their characterization of his enrollment status, and declared he will attend ASU in the spring despite student activists’ pushback late last month.

Rittenhouse was vindicated by a jury of all charges last month, proving he’d lawfully exercised self defense during the Kenosha riots. During Wednesday’s episode of political news and comedy show Louder with Crowder, Rittenhouse explained that he’s a student at ASU currently.

“Yeah, it’s online. I took a compassionate withdrawal from my classes. My professors offered it and then a week later they gave me a compassionate withdrawal which – thank you for that. But then they came out with a statement saying, ‘Oh no no, he’s not enrolled at ASU anymore.’ I’m enrolled, I’m just not in any classes, but I have a student portfolio,” said Rittenhouse.

“Kyle Rittenhouse did not go through the ASU admissions process but was enrolled in two publicly available online courses for this semester. University records show that he is now no longer enrolled, a status precipitated by his own actions,” stated Thorne.

That wasn’t all that Rittenhouse had to say about his future education. Rittenhouse also told LWC that he wasn’t deterred by the socialist and social justice student protestors at ASU.

“There weren’t even a lot of protestors there. It was a very, very small amount. And then people are just like, ‘I thought you were getting an education?’ and I’m like, yes, that’s what I want to do,” explained Rittenhouse. “I want to go to law school. I’m going to ASU in the spring in person. I want to do my four year undergrad there before I take the LSAT and go do my three years of law.”

Some recognizable faces were among the protestors’ number. One of the featured speakers there was Mastaani Qureshi – one of the three women found guilty of ASU’s Code of Conduct for harassing two white male peers with apparently rival political beliefs out of a common space on campus. Mastaani apparently took issue with another white male that represented apparently rival political beliefs, Rittenhouse, for his potential attendance at ASU. She claimed he was a white supremacist, vigilante, and killer.

“We want to say that Kyle Rittenhouse is not just any random killer, he’s a white supremacist killer. He is a vigilante. He is the descendant of white Americans who killed black and brown people. White supremacists back in the day were also acquitted of all charges if we have read history,” asserted Mastaani. “Kyle Rittenhouse didn’t get a guilty verdict because he was f*****g white!”

The entire Kenosha ordeal has shaped Rittenhouse’s career goals. Rittenhouse originally expressed an intent to study nursing, a desire reflected by his reason for being in Kenosha that fateful night last August: to put out fires and administer first aid to anyone present. Then on Wednesday, Rittenhouse confirmed with Crowder that he intends to study law instead of nursing because of the prosecutorial misconduct he witnessed and experienced during his trial.

“I want to be a criminal defense attorney,” said Rittenhouse. “I’m big on, no matter who the person is, I believe everybody deserves fair and good legal representation.”

OJ Simpson jury consultant Jo-Ellan Dimitrius helped select the jury for Rittenhouse’s trial. Rittenhouse said that she was an amazing support for them.

“She’s a phenomenal jury consultant. She’s more than that for us, though. She was a rock for my mom – someone my mom could lean on and hold during this entire ordeal,” said Rittenhouse.

ASU Silent On Protests Against Rittenhouse

Arizona State University (ASU) told AZ Free News that it doesn’t have anything to say about Wednesday’s student-led protest against Kyle Rittenhouse’s prospective enrollment to the university. Four student organizations that advocate for socialism and other social justice causes coordinated the protest: Students For Socialism (SFS), Movimiento Estudiantil Chicanx de Aztlán (MEChA), Students for Justice in Palestine (SJP), and the Multicultural Solidarity Coalition (MSC). The following is the only statement ASU spokespersons had concerning Rittenhouse:

“Kyle Rittenhouse has not gone through the ASU admissions process. University records show that he is not currently enrolled in any classes at ASU.”

ASU President Michael Crow clarified in an alternative, slightly lengthier statement to State Senator Kelly Townsend (R-Mesa) that Rittenhouse voluntarily unenrolled, and ASU would consider Rittenhouse’s application with the same consideration granted to any other applicant should he decide to reenroll.

“Kyle Rittenhouse did not go through the ASU admissions process, but was enrolled in two publicly available courses for this semester. University records show that he is now no longer enrolled, a status precipitated by his own actions,” wrote Crow. “As a university that measures itself by whom it includes and how they succeed, should he choose to seek admission in the future, his application will be processed as any other would be.”

The student organizations said it didn’t matter to them that Rittenhouse wasn’t enrolled currently – the fact that he planned to enroll again in the spring was still problematic.

“While students with debilitating medical problems or going through mental health crises must fight tooth and nail for medical leave of absence, Rittenhouse is given ‘compassionate’ withdrawal to deal with his murder trial – unacceptable,” tweeted SFS in back-to-back tweets sharing the State Press coverage. “We will not allow it! Killer Kyle off our campus!”

In an interview with The Conservative Circus, ASU College Republicans United (CRU) State Chair Ren Ramsey insisted that the behavior of the four student organizations was harassment.

“[T]he fact that these radical, domestic extremist [student] organizations on campus have created a hostile environment for many students that have conservative or patriotic beliefs,” said Ramsey. “We would like to make a demand that [these organizations] be suspended. They deliberately created a hostile environment for Kyle Rittenhouse. [Campus] was made unsafe for him, for many other conservative students. We want the ASU administration to place them under suspension. They’ve also been involved in pushing out two white kids from the multicultural center for being white.”

Ramsey further claimed that ASU has consistently supported the behaviors and values of the organizations protesting Rittenhouse, and has been hostile to organizations like theirs. He asserted that ASU officials gave MEChA an entire basement area to use, but won’t give CRU a professor to serve as their advisor.

As for the multicultural center incident, Ramsey was citing the September incident in which three female student activists harassed two of their peers out of a common area for being white males displaying “racist” messaging, such as a “Police Lives Matter” sticker. ASU found that the women involved had violated several policies within the university’s Code of Conduct, though it is unclear if any disciplinary action has been taken yet.

The student organizations aren’t only protesting the potential admission of Rittenhouse – they’re also making demands of ASU. The groups insisted that ASU rectify Rittenhouse’s past and potential future presence on campus by funding the Multicultural Center and a Campus Assault Advocacy, Resources & Education (CAARE) Center, a rape crisis center helping sexual and domestic assault victims. ASU wouldn’t comment on these demands, either.

“It’s good to see he knows he’s not welcome here, we’ll still be there Wednesday to tell administration to support our other demands,” said the organization. “Denounce white supremacy, fund the Multicultural Center and the CAARE center!”

Rosenbaum was a convicted child molestor, and Huber was a convicted domestic abuser. In their statements, the coalition of student organizations only referred to the deceased men as “anti-racist protestors” and victims.

Court proceedings revealed that Rosenbaum wasn’t at the Kenosha, Wisconsin riots to protest for Black Lives Matter (BLM) or anti-racism. Rather, Rosenbaum happened to be discharged that day from a mental hospital for a suicide attempt; Rosenbaum threw a hospital-provided plastic toiletries bag at Rittenhouse just before the fatal moment when he grabbed the barrel of Rittenhouse’s gun.

The claimed “anti-racist” was also heard by eyewitnesses and recorded as having shouted repeatedly a racial slur: “Shoot me n***a!”

Here’s our extended statement regarding Kyle Rittenhouse on campus, including our revised demands.

The protest is still on! See you Wednesday at 3:30PM! pic.twitter.com/9nSHacbBHR

AZ Free News asked SFS why they and their coalition of fellow student organizations chose to use their Rittenhouse protest to demand funds for a CAARE center, considering the criminal histories of Rosenbaum and Huber. SFS responded that Rosenbaum and Huber could have been anyone.

“Did Rittenhouse run a background check on Rosenbaum before? Are you saying he premeditated the murder? No, he didn’t. It could have been anyone. Period,” responded SFS.

We attempted to follow up further with SFS on their response and our other, unanswered question. They didn’t respond by press time.

Another similar effort to bar Rittenhouse from attending ASU – a Change.org petition unaffiliated with the student organizations’ efforts – has garnered around 13,000 signatures as of press time. 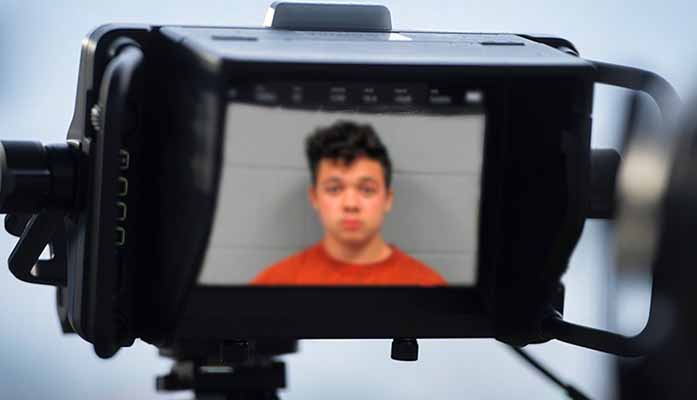