A lawsuit filed in Maricopa County Superior Court on Wednesday argues that efforts to have voters decide whether Arizona’s new flat-rate income tax and other tax law changes should go into effect are unconstitutional.

The Arizona Free Enterprise Club (AFEC) is among the plaintiffs seeking a court order to bar the acceptance of petition signatures gathered by Invest In Arizona, a political committee sponsored by Arizona Education Association and Stand for Children – Arizona, which wants voters to overturn three revenue-related bills recently signed by Gov. Doug Ducey.

The problem with Invest in Arizona’s plan, the lawsuit argues, is that Article 4 of the Arizona Constitution prohibits referendums of legislation which deals with revenues and appropriations used for the “support and maintenance of the departments of state government and state institutions.”

AFEC is a nonprofit 501(c)(4) corporation organized and operated for the promotion of social welfare. It does so by engaging in public education and advocacy in support of free markets and economic growth in the State of Arizona.

Joining AFEC as plaintiffs in the lawsuit is the group’s executive director, Scott Mussi, as well as Diane Schafer, a registered voter from Yavapai County.

The legislation which Invest in Arizona wants to challenge via referendum are Senate Bills 1783, 1827, and 1828. The bills were passed near the end of the recent legislative session and then signed by Gov. Doug Ducey.

SB1828 amends Arizona’s current income tax brackets and tax rates and provides for a single income tax rate of 2.5 percent conditioned on certain general fund revenue thresholds. It was the cornerstone of Ducey’s budget package approved by the legislature earlier this month.

A companion bill, SB1827, ensures an individual taxpayer’s taxable income will not be subject to an overall marginal tax rate of more than 4.5 percent when a tax surcharge from Prop 208 (Invest In Ed) is considered.  Meanwhile, SB1783 allows certain small business owners to pay an alternative small business tax.

The legislation is slated to take effect 90 days after the governor affixed his signature. That 90-day window provides time for challengers to initiate a petition signing drive to take the matter out of lawmakers’ hands and put it before voters across the state via a referendum.

Getting a matter onto a ballot as a referendum requires valid petition signatures to be submitted to Arizona Secretary of State Katie Hobbs equal to five percent of the total votes cast in the last gubernatorial election. If that happens, then the new laws would remain on hold until voters have their say in a statewide election.

And that, according to AFEC, Mussi, and Schafer, should not be allowed to happen with SB1783, 1827, and 1828 because each deals directly with the generation of state revenue for funding Arizona’s state government and state institutions.  Their lawsuit asks a Maricopa County judge to bar Hobbs from accepting petition signatures for any of the three bills.

“The filing of petitions in support of the Proposed Referenda will injure the Plaintiffs and all Arizona taxpayers by unconstitutionally delaying the effective date of non- referrable laws duly enacted by the elected Legislature and approved by the Governor,” the lawsuit states.

The plaintiffs are represented by Thomas Basile of the Statecraft Law Firm. Basile says his clients are not against voter referendums in general and only initiated this legal action to ensure the Arizona Constitution is followed by Hobbs’ office.

“At the core of our case is that while the right of referendum is broad, it is not unlimited,” he told AZ Free News on Thursday. “The framers of our Constitution carved out certain categories exempt to referendum, such as in the case of tax reform and appropriations.”

Hobbs is named as a defendant in her official capacity as the state officer responsible for accepting or rejecting referendum petition sheets. Invest in Arizona is also named as a real party in interest. 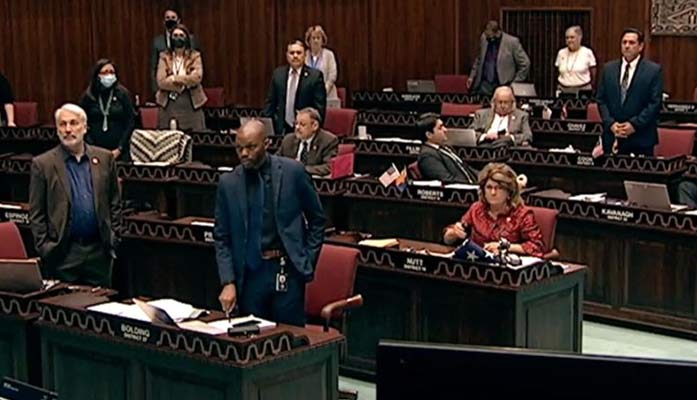 Senate President Karen Fann will try one more time this week to pull together the 16 votes needed to pass the budget bills, something she could not do Wednesday when one of the 30 senators did not come to work.

The Republican-majority Senate stands in recess until 11 a.m. Thursday at which time several bills are scheduled to be considered, most of which are budget-related. There was hope Wednesday that the 16 Republicans would pass the bills, but Sen. Michelle Ugenti-Rita’s daylong absence quashed that option.

Fann and Majority Leader Sen. Rick Gray need the entire Senate Republican caucus on board, so if it appears the 16 votes are not a sure thing Thursday then Fann can simply recess her chamber until June 10, a plan put into place Wednesday night after House Speaker Rusty Bowyers chose to recess his chamber for several days.

In the meantime, the fate of the months-long negotiated spending budget, tax cuts, and plan to transition Arizona to a flat rate income tax remains uncertain, according to budget-watchers. And that may not bode well for the flat tax plan which Republicans have sought for years.

“Right now, the flat tax proposal is still being negotiated among members to address a couple of concerns,” according to Scot Mussi, head of the Arizona Free Enterprise Club. “The first concern is the alleged impact on cities and towns due to revenue sharing. Cities are arguing that the tax cut will result in a massive cut in shared revenue from the state.”

But Mussi pointed out that flat tax supporters, including AFEC, believe cities are enjoying budget surpluses -in some cities quite sizable surpluses- and continue to receive a large infusion of new revenue from the taxation of online remote sales.

“The second concern was that the proposed tax package included a tranche of special interest tax breaks, which groups like ours oppose,” Mussi said. “It is our understanding that most of these tax breaks, including one for low income housing and another for wealthy investors, will be removed from the plan.”

But Mussi says groups like AFEC continue to support this year’s budget plan -minus the special interest tax breaks.

“Currently, Arizona has one of the highest income tax rates in the nation and we are uncompetitive compared to our low tax neighbors. The proposed tax plan goes a long way toward addressing this problem,” he explained.

With uncertainty over whether Fann has the 16 votes in the Senate and House Speaker Rusty Bowyers has his 31 votes, Mussi says the budget negotiations are likely not over.

“There is still a lot of horse trading occurring, much of which will continue,” he said. “Some of the demands still being made related to the budget is to rein in some of the pork barrel spending, make tweaks to the tax plan to address concerns with the cities, and to address other policy issues such as election integrity and school choice.”

And what about Fann and Bowyers trying to poach support from a few Democrats if not all Republicans are on board soon?  Mussi believes the only budget bills Democrats may vote for would be the Education Budget which includes K-12 spending increases. But the legislative leaders are likely to have a hard time getting any further support across the aisle for the rest of the budget, Mussi said.