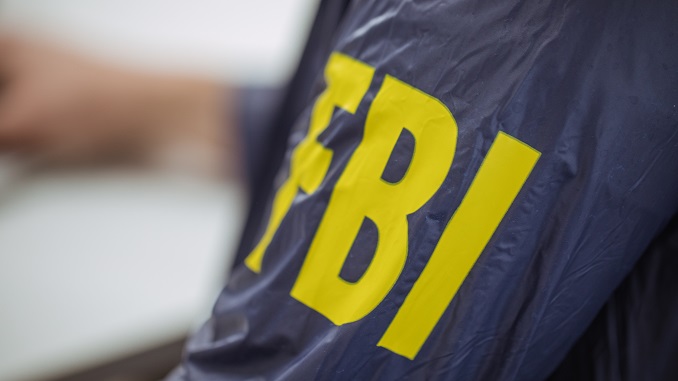 Today every Republican finds themselves asking a new question: “If I speak out, will the FBI come for me next”? Recently, the LD3 Republican Committee heard a “Resolution to Censure the FBI as the Arm of the Leftist Police State in Maricopa County.” The fear in the room was palpable, for nobody knows any longer where the First Amendment ends and “sedition” begins. Yet nonetheless, one brave man, the songwriter Bruce Arlen, stood up and began to read.

He read a damning condemnation of the weaponization of the DOJ and the perversion of the law. And he read a clear and resounding call for the Legislature and Governor of Arizona, through both words and actions, to provide the citizens of our state with the “double security” against invasion of their liberties for which the federal system was designed. His courage inspired others. The motion carried. Bravery is contagious.

I am also afraid. I have seen the mechanizations of the DOJ and J6 Committee up close and know that this is no idle political witch-hunt but a coordinated and deadly serious effort to decapitate the Republican Party’s leadership and cow ordinary Republicans into silence and inaction. To be sure, some of the rioters on January 6th appear to have broken the law. But most of the “crimes” that Washington’s tyrants are now investigating amount to no more than allegations that political opponents said things that they do not like. The others are mere pretexts to prosecute people for the same reason.

Over the past few months, I have fielded too many questions from the Republican grassroots about whether they can still communicate with party leadership safe from the prying eyes of the FBI. And as a lawyer, I have had too many citizens come to me to ask, “can I say this”? One is too many.

So let me be clear: President Trump has a constitutional and God-given right to say that the 2020 election was stolen. So do you. And President Trump, like all Americans, has a constitutional and God-given right to petition Congress to take action on the basis of that belief or any other. Had Congress acted, those acts would, perhaps, have been proper subjects of judicial review. The rights to expression and petition are not. They are absolute.

Unfortunately, citizens are increasingly aware that if they are unlawfully targeted for their speech, they can no longer rely on the procedural protections of the American justice system as they once might have. The left has long intimidated and harassed attorneys willing to represent conservatives through the traditional Soviet tactics of the midnight phone call and anonymous threat. With the 65 Project, the left has institutionalized this harassment through a coordinated and well-funded effort to “shame” such attorneys, “make them toxic in their communities,” and curtail their ability to practice law by filing bar complaints against them. Attorneys willing to defend conservatives, never many in number, are becoming a rapidly dying breed.

In a few months, I will place my hand on the Bible and swear to defend the constitutions of the United States and the State of Arizona against all enemies, foreign and domestic. Then, despite my fear, duty will no longer permit me the luxury of inaction. I have heard the cries of the people of my district and will make every effort to fulfill my sacred obligation to defend the liberties of the citizens of Arizona.

It is a fact unknown to most that the federal and state criminal codes are so lengthy and complex that almost everyone is a criminal. It is, for example, a federal offense to slice canned peaches incorrectly. When everyone is a felon, prosecutors have unfettered discretion to prosecute their political opponents for perfectly “real” crimes. To protect our rights to freedom of speech and association, I will work to reform the law to ensure that only things that you and I would perceive as morally wrong can be prosecuted.

Ten years ago, Congress caught the FBI teaching agents that they could “bend or suspend the law.” Its academy is notorious for teaching trainees that suspects have “forfeited their right to the truth.” Thus, should the FBI continue down its dark path, I will go further and heed the calls of my PCs to introduce legislation prohibiting the State of Arizona from sharing information with the FBI that might help facilitate their reckless political prosecutions.

I call on liberals of good faith to join in these efforts. The FBI began its metamorphosis under Hoover. I am not blind to the fact that it was one of my favorite Republican presidents, Calvin Coolidge who appointed him. The erosion of our constitutional liberties was furthered by Dick Cheney’s push to expand the power of the secret FISA courts to spy on American citizens. His daughter Liz Cheney now continues his dastardly work by serving on the J6 committee. Today they are coming for Trump and the GOP leadership. But tomorrow the midnight knock could be at the door of my home. Or yours.

Do not let yourself become used to these escalations. Do not let your anger diminish with each new outrageous assault on your rights. Do not allow your liberty to be slowly boiled away like the life of a frog in a pot. The time to stand is while the noose sits but lightly about the neck. The time to fight is now.

Alexander Kolodin is a constitutional attorney and a Representative-Elect to the Arizona House. 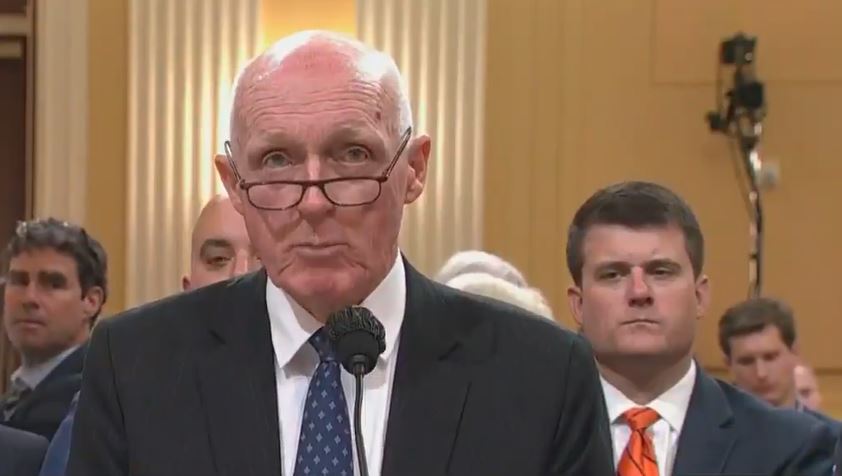 Arizona House Speaker Rusty Bowers (R-Mesa) sat next to Georgia Secretary of State Brad Raffensperger and his chief operating officer Gabriel Sterling, wearing stoic expressions as they awaited the hearing and eliciting the occasional smile as a tight gaggle of reporters filmed and photographed the trio. Though, later on, Bowers would grow upset, even holding back tears when his responses turned to include references to the Constitution and his daughter, who passed away a year ago.

Also smiling was Representative Adam Schiff (D-CA-28), when he entered the room behind the more somber-faced Committee Chair Bennie Thompson (D-MS-02) and Vice Chair Liz Cheney (R-WY), and throughout his line of questioning.

Thompson commenced the hearing by recapping the committee’s narrative that former President Donald Trump orchestrated the January 6 riot at the Capitol to overturn the 2020 general election, despite knowing completely that he lost the election. The committee characterized Bowers and Raffensperger as two of the handful of “brave” officials who stood between Trump and the 2020 election results.

Thompson said that lack of action would further undermine future actions and lead to “catastrophe.”

Cheney echoed Thompson’s statements, directing viewers to understand calls made by Trump to state officials within the context of the committee’s claim that the former president knew that the election wasn’t stolen. Cheney told viewers that they shouldn’t be distracted by “conspiracy theories and thug violence.”

“The point is this: Donald Trump did not care about the threats of violence. He did not condemn them. He did not care to stop them,” said Cheney. “Today we’re going to see an example of what truly makes America great.”

The committee characterized nationwide discontent with the 2020 general election’s validity as “increasingly violent” in the weeks preceding January 6.

Bowers was the first to testify. As he was about to begin Schiff said he received word from his staff about one of the latest statements issued by Trump claiming that Bowers affirmed that the election was “rigged” and that the former president won Arizona.

“Bowers should hope there’s not a tape of the conversation,” said Trump.

Trump’s statement disrupted the hearing proceedings; it prompted Schiff to vet Bowers about Trump’s claims and the content of the call in question. Bowers categorically denied Trump’s account of the phone call.

In the statement, Trump called Bowers a “RINO,” short for “Republican In Name Only” and referred to the January 6 Committee as the “Unselect Committee.”

Bowers asserted that on a phone call with Trump, lawyer Rudy Giuliani promised to give him evidence of mass voter fraud, but never did. Bowers said he told Trump he refused to overturn the election results because it was against his oath as an elected official.

“I said look, you’re asking me to do something that is counter to my oath, that is sworn to the Constitution, that I uphold it,” said Bowers. “This is totally foreign as an idea or a theory to me, and I would never do anything with such deep magnitude without consultation of my attorneys.”

Bowers held back tears as he described how Trump’s pressure caused internal turmoil for him, because his faith inspired a deep respect for the Constitution as a divinely inspired document.

Bowers confirmed that he met with Giuliani at a Phoenix hotel after the election. He recounted that Giuliani repeated claims of mass voter fraud, which Arizona State Senators pressed him on. Bowers said that he and Giuliani both pressed Trump lawyer Jenna Ellis to turn over the evidence to the Arizona legislators, but she kept claiming that she didn’t have it on her.

Bowers denied ever receiving evidence of mass voter fraud from Trump’s team. He noted that he and other members of his staff remembered Giuliani admitting that they had no evidence, just theories on voter fraud in the 2020 election.

“My recollection: he said ‘We’ve got lots of theories, we just don’t got evidence,’” recounted Bowers.

The committee revealed previously undisclosed video of “Stop the Steal” protestors, which prominently featured Jacob Angeli, commonly referred to as the “QAnon Shaman,” who is currently serving his 41-month sentence for breaking into the Capitol on January 6.

Bowers alleged that Trump’s lawyer John Eastman asked him to deny the 2020 election results and “just let the courts sort it out later.” He clarified that he recalled Eastman saying, in so many words, that the authority of the legislature was plenary and that he as house speaker had the authority to undertake the requested action.

Schiff referred back to a previous press release from Bowers in which the speaker declared he wouldn’t decertify the election results.

“We have no legal pathway nor to my knowledge in federal law, for us to execute such a request. I am not allowed to walk or act beyond my authority. If I’m not specifically authorized as a state legislator, then I cannot act,” said Bowers.

In closing, Bowers read from his diary, citing that his Christianity moved him to oppose Trump. He also described facing angry constituents in the aftermath, some of whom came to his home while his gravely ill daughter was inside.

“It is painful to have friends who have been such a help to me turn on me with such rancor,” read Bowers. “How else will I ever approach [God] in the wilderness of life, knowing that I ask this guidance only to show myself a coward in defending the course he led me to take?”