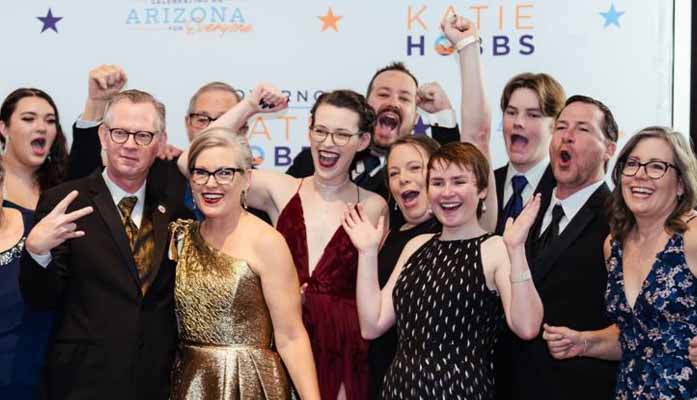 The public relations and legal fallout continues after the nonprofit which accepted donations for Gov. Katie Hobbs’ public inauguration ceremony released the names of donors and the amount of each donation.

Hobbs was officially sworn in Jan. 2 during a private ceremony. She then held a public inauguration ceremony on Jan. 5. The information about who paid for that ceremony via the Katie Hobbs Inaugural Fund was finally released several days later, after attorney Tim La Sota threatened to sue Hobbs for violating public records laws.

The Katie Hobbs Inaugural Fund was registered with the Arizona Corporation Commission on Dec. 13 by Hobbs’ campaign manager Nicole DeMont as a 501(c)(4) nonprofit social welfare organization. DeMont is currently listed as the only director on ACC records.

DeMont and Hobbs have come under scrutiny for accepting $1.5 million from roughly 120 donors, including $250,000 from utility giant Pinnacle West Capital Corp., the owner of Arizona Public Service Co. (APS). But the event cost less than $210,000, according to public records.

Government transparency watchdogs are calling for an investigation into whether Hobbs’ inauguration team had a pre-event budget worked out and whether more money was intentionally accepted than needed. But La Sota says there also remains a question of whether Hobbs violated another Arizona law by using the state’s website to solicit money for her inauguration.

“That’s definitely a no-no,” La Sota told KFYI’s James T. Harris this week. “That’s no different hardly than just putting a link on the governor’s official state website to her campaign account and saying, ‘hey you know do you want to support me politically, go to my campaign.’”

Questions surrounding the inaugural fund have also led some Democrats across Arizona to express dismay, behind the scenes, that Hobbs put them in the position of having to publicly ignore the $1.5 million controversy, just years after leaders of the Democratic Party called for an investigation into the funding of Donald Trump’s inauguration.

There is also growing pushback to utility companies like APS getting so heavily involved in politics; public records show APS donated $850,000 to the failed gubernatorial campaign of Kari Lake.

APS responded to criticisms about its donation to the Katie Hobbs Inaugural Fund with a statement that the money came from shareholder funds and not from customer payments. However, the company’s image has taken a hit in the court of public opinion given the fact APS is currently seeking a rate increase.

Another large donor to the inauguration was Blue Cross Blue Shield, which anted up $100,000, as did the lobby arm of the National Association of Realtors along with Arizona Realtors. There was also $100,000 donated by Sunshine Residential Homes Inc., a for-profit company that contracts with the State of Arizona to provide some child welfare services.

The rest of the donations ranged from $10 to $50,000; several were from entities like Union Pacific, the Arizona Dispensary Association, and Salt River Project which have dealing with various state agencies.

So what happens to the $1 million plus left on the books of the nonprofit created for Hobbs inauguration?

According to the IRS, the money can be spent on anything DeMont desires, provided it falls under the very broad category of promoting social welfare within the IRS code for a 501(c)(4).

“To be operated exclusively to promote social welfare, an organization must operate primarily to further the common good and general welfare of the people of the community (such as by bringing about civic betterment and social improvements),” according to the IRS.

In addition, seeking legislation germane to the nonprofits programs is a permissible means of attaining social welfare purposes.

“Thus, a section 501(c)(4) social welfare organization may further its exempt purposes through lobbying as its primary activity without jeopardizing its exempt status,” the IRS rules state.

There has been much public consternation that DeMont will use some of the inaugural fund donations for political activities. This is permissible under IRS rules provided engaging in politics is not the “primary activity” of 501(c)(4).

The only other stated restriction under IRS Code is that the political activity cannot involve “direct or indirect participation or intervention in political campaigns on behalf of or in opposition to any candidate for public office.”

The code makes no mention of restrictions to referendum or initiative measures that might come before voters.

Therefore, it is possible that donors to the Hobbs’ inauguration could end up seeing DeMont use their money against own their political interests.