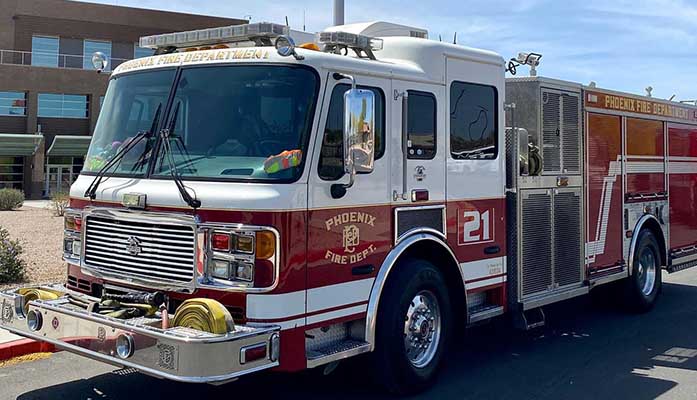 Among those slated to speak at the noontime event is Kimball Cody, a firefighter – paramedic fired two months ago by the Salt River Fire Department. Cody’s termination after 13 years of dedicated service was due to his unwillingness receive the COVID-19 vaccine.

Similar firings are being threatened by the City of Phoenix for any of its 14,000 employees who do not provide proof of vaccination by Jan. 18, 2022, despite the fact the city told employees in May that vaccinations “are a personal choice that will not impact your employment in any way.”

City Manager Jeff Barton reversed course last month when he issued the mandate that can result in termination. Arizona Attorney General Mark Brnovich is suing Phoenix officials over the mandate, but it could be months before a federal court reaches a decision.

Leaders of the unions which represent the city’s public safety employees say less than 50 percent of their members intend to comply with the mandate. The worry for many Phoenix residents is that experienced police officers, firefighters, and other critical service employees will seek jobs in other communities.

“Phoenix public safety is already in a crisis,” says Hamilton, a city resident. “Police and Fire are both terribly short-staffed and 911 response times are horrific. The mandate will crush public safety and the most vital city services like trash, water, and infrastructure.”

Some city employees are expected to meet Tuesday morning with a handful of state lawmakers prior to the Heroes Freedom March to discuss the city’s actions, according to Sen. Kelly Townsend (R-LD16).

For Cody, he was one of 84 employees for Salt River FD who were notified in late August of a vaccination mandate imposed by the Salt River Pima-Maricopa Indian Community (SRPMIC) tribal council. He then spent the next 40 days reflecting on whether the vaccine was the right thing for him and his family.

“We were really hoping it would be a bluff but there was no letting up,” Cody told radio host James T. Harris on Monday. Cody explained that his two requests for medical exemptions were denied, and Salt River tribal leaders refused to consider religious or spiritual exemptions.

In the end, four firefighters were terminated for non-compliance of a vaccination mandate which was never imposed on tribal members nor the employees of Talking Stick Resort and Casino which is also owned by SRPMIC.

Cody, who lives in east Mesa, told Harris he is speaking at the Heroes Freedom March to help Arizonans understand the negative impacts vaccine employment mandates are having.

“This mandate is real. My wife interacts with your wife. My kids go to school with your kids,” Cody said. “This is not a mandate in California or New York or some far away land. This is a mandate that is effecting real people right here and right now.”

Cody also wants to encourage Arizonans to contact Gov. Doug Ducey and their state legislators with a demand for a special session to enable passage of anti-mandate legislation.

Hamilton says EZAZ.org is hoping for legislation or court action against all vaccination mandates in Arizona before Christmas. “Families deserve to have this mandate put to rest so they can enjoy the holidays without worry,” she told AZ Free News. 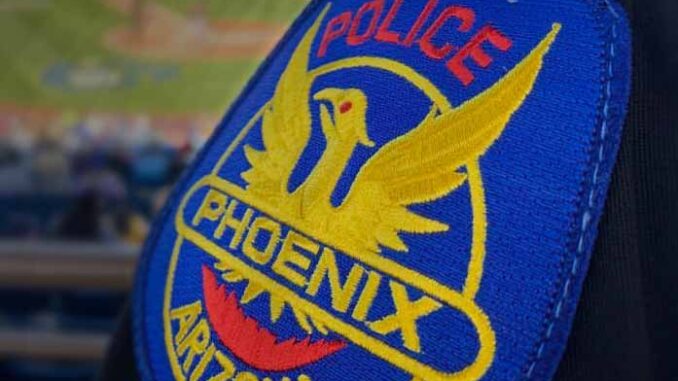 City of Phoenix Mandating COVID-19 Vaccine For All Employees

Attorneys for the Goldwater Institute and the City of Phoenix will be in court Wednesday to argue over whether government workers subjected to a collective bargaining agreement can be forced to finance union activities, including a union’s political endeavors.

The issue before Judge Daniel Martin of the Maricopa County Superior Court is a legal challenge brought on behalf of two city employees over a practice known as “release time” approved by the Phoenix City Council in 2019. Release time allows some city employees to be paid to work for their private union instead of working for the public.

Employees utilizing release time are allowed to engage in activities such as lobbying, union membership drives, filing grievances against the employer, and wage and benefit negotiations. Release time activities of city employees are subject to the discretion and control of the union, not the city which pays the employees.

In May 2019, the City of Phoenix signed a Memorandum of Understanding (MOU) with the American Federation of State, County, and Municipal Employees, Local 2384, Field Unit II (AFSCME) which serves as the exclusive bargaining unit for a wide range of public workers, including but not limited to electricians, mechanics, security guards, street technicians, and maintenance workers.

AFSCME is the nation’s largest public services employees union with more than 1.3 million working and retired members. The MOU applied to all City of Phoenix employees assigned under Field Unit II whether union members or not, and it provides for myriad release time benefits, including four full-time release positions.

“That means that four city employees are released full-time to work exclusively for the union at the public’s expense,” according to the Goldwater Institute, which also noted nearly 3,200 additional paid work hours are available to other union representatives. That is roughly equivalent to 80 weeks of full-time work.

In October 2019, attorneys with the Goldwater Institute sued the City of Phoenix on behalf of two Field Unit II city employees who contend the release time salaries and benefits in the MOU are funded by all government employees of a specific bargaining unit.

The result, the lawsuit argues, is that non-union members are forced to fund union activities in violation of the First Amendment to the U.S. Constitution, along with Arizona’s Right to Work laws and other state constitutional provisions, the employees contend. The lawsuit also contends the four full-time release time employees “are not contractually required to provide an accounting to the City for how they use release time.”

Judge Martin will hear oral arguments Wednesday and Friday in dueling motions for summary judgment filed by the parties. Court records show AFSCME has been granted intervenor status in the case.

Among the organizations also opposed to release time policies is the American Legislative Exchange Council (ALEC) which has developed draft legislation that lawmakers across the country can use in an effort to ban paid union activity by public employees.

Under the ALEC draft legislation, it would be “against public policy” for a public employer like the City of Phoenix to enter into a deal with any private union to compensate a public employee for union activities.

“While public employees should not be prohibited from freely associating outside of their employment duties, including hiring individuals to help represent their interests, this should occur at public employee, not taxpayer, expense,” according to the ALEC website.