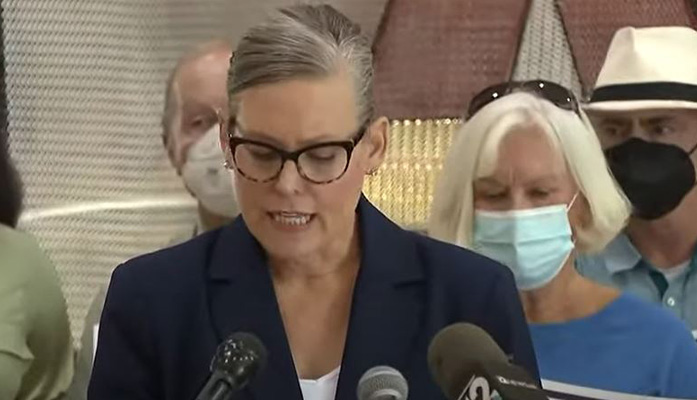 The AZGOP asked Brnovich to determine whether Hobbs violated federal or state laws by using state resources in coordination with the Biden administration to remove posts on her office’s behalf. They further requested that Brnovich obtain the entire trove of communications between the secretary of state’s office and Twitter.

As the Arizona Daily Independent reported, court filings in the case Missouri v. Biden revealed that the secretary of state’s office used a middle man of sorts to censor online speech: the Center for Internet Security (CIS).

CIS is led by a former Obama administration official, and has received hundreds of millions in federal grants and contracts over the past two decades.

Several days after discovery of Hobbs’ arrangement to moderate online speech, Hobbs called on Arizonans during the statewide canvass certifying the election to suppress election misinformation and disinformation.

While Hobbs hasn’t addressed the controversy over her office’s moderation of online speech, her incoming chief of staff and former assistant secretary of state, Allie Bones, issued a statement to multiple mainstream media outlets defending the arrangement.

Bones told reporters that it was the job of governments, including the secretary of state’s office, to purge the public square of perceived misinformation and disinformation. Bones added that the CIS arrangement was a normal one between governments and social media companies. The chief of staff insisted that their actions weren’t silencing dissent.

“One of the ways we [make sure that voters are informed] is by working to counter disinformation online that can confuse voters,” stated Bones. “This is yet another example of conspiracy theorists trying to create chaos and confusion by casting doubt on our election system. It’s unfair to Arizona voters and it’s harmful to our democracy.”