25 Arizona House and Senate Republicans led by freshman State Representative Jake Hoffman (R-Phoenix) called for Governor Doug Ducey to do something about the school districts defying state law with their mask mandates. The news release on Wednesday revealed that Republican legislators have urged Ducey privately to take action, to no avail. This public statement appears to be their next step in convincing Ducey to enforce the law.

It’s been over a week since the first school district called a mask mandate: Phoenix Union High School (PXU). Other schools followed suit soon after: most recently, Flagstaff Unified School District (FUSD). Ducey hasn’t taken action – though his spokespersons have relayed Ducey’s finger-wagging statements of disapproval in response to those school districts.

Hoffman’s statement explained that the ban on mask mandates included a retroactivity clause that puts it in effect – contradicting school districts’ insistence that the law can’t take place until 90 days after the end of the legislative session, per Arizona statute. He noted that the school districts’ behavior undermined lawful government and bordered on anarchy.

“Under Arizona’s constitutional form of government, local governments do not have the authority or power to usurp state law simply because they disagree, yet that is precisely the kind of illegal activity in which many local governments are presently engaged. The Arizona legislature, with the Governor concurring, very intentionally enacted the laws at hand to protect Arizonans and Arizona children from the threat of government mandating them to wear a mask or be injected with a vaccine,” wrote Hoffman. “A resounding message must be delivered to any local government or subdivision of the state considering defying state law – lawlessness will not be tolerated.”

“It’s unfortunate that some of our government-funded schools have chosen to blatantly ignore state law and the will of the majority of Arizonans by instituting mandates regarding students wearing face coverings,” relayed Grantham. “I support executive action by the governor to include withholding of taxpayer dollars and expansion of school choice funding options giving more educational choices to parents. I also support any efforts by law enforcement to enforce state law and I encourage parents and teachers to follow state law when sending their children to school and when on school grounds. Next year I will make it a focus to hold those who violate state law accountable and ensure appropriate funding reductions are in place for districts that purposely violate the law.”

State Representative Joseph Chaplik (R-Scottsdale) also signed onto the statement. He reiterated to AZ Free News that disagreement with the law isn’t justification for violation of it. Chaplik wrote the legislation that effectively banned mask mandates in schools. He, too, asserted that the power to act is in Ducey’s hands.

“Just because some don’t agree with policy and law, we should not disrespect and violate it while also teaching children these illegal tactics,” said Chaplik. “We passed this policy due to the inconsistencies of results with mask use and the unknown long term health issues that can impair our children. We need to stop this madness. The legislature did its job and now the executive branch needs to enforce the law.”

As of press time, Grantham and Chaplik said that they haven’t seen or heard any responses from Ducey. 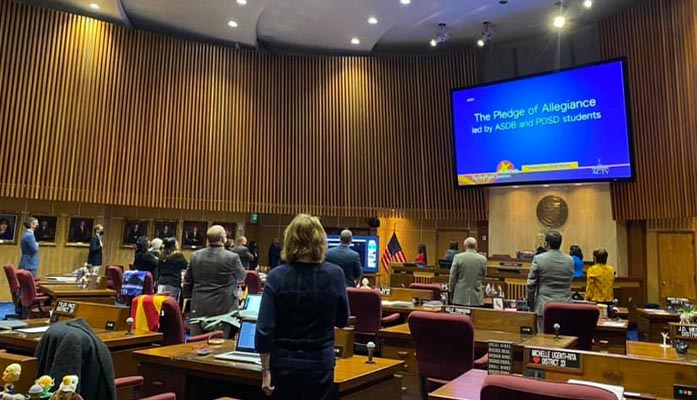