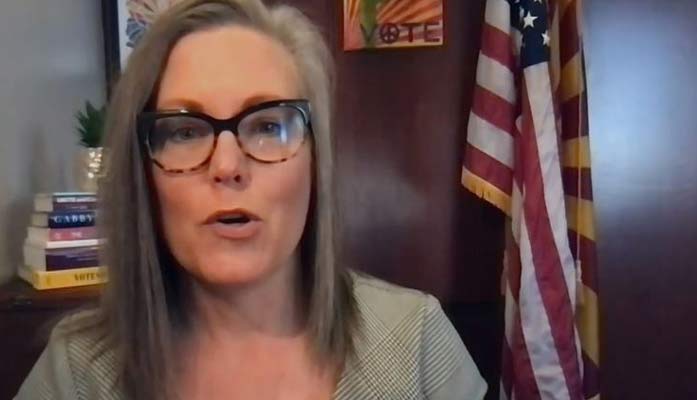 On Monday, the Daily Mail published an exclusive investigative report revealing that Hobbs helped organize a “Slave Day” at Seton Catholic Preparatory High School. The annual tradition was part of a spirit week characterized by slave-themed hazing between classes, including an auction where senior students were “sold.”

The report comes just a month before the anniversary of the second court ruling determining that Hobbs committed racial and sexual discrimination against a former Senate employee, Talonya Adams, while the Senate minority leader. Next Monday will mark the third anniversary of the first ruling against Hobbs.

Hobbs avoided issuing an apology to Adams. Rather, Hobbs gave the Arizona Mirror an exclusive interview to defend her firing of Adams. Hobbs claimed that, regardless of what the courts decided in both lawsuits, she fired Adams based on performance issues. Hobbs further stated that Adams was paid less because she was a Democrat.

Following the community outrage in response to that article and other public statements defending her firing of Adams, Hobbs changed her tune. Hobbs blamed “systemic racism” for her errors, saying that the inequities faced by Adams were invisible to her.

“My response to the jury verdict was short-sighted, unnecessarily defensive, and failed to meet the moment,” said Hobbs.

As part of her apology, Hobbs pledged to recruit, campaign, and hire women of color to leadership positions; create a Chief Equity Officer to enforce government diversity, such as through the Office of Equal Opportunity to improve human resource protocols; and create a position within each agency dedicated to people of color and marginalized communities.

Hobbs ignored the report of her involvement in Slave Day activities; she never responded to Daily Mail inquiries about it. Hobbs didn’t respond to other outlets’ inquiries, either.

Instead, Hobbs focused her Monday messaging on her proposed policies, celebrating Indigenous Peoples Day in lieu of Christopher Columbus Day, the alleged Republicans who will cast their vote for her, celebrating World Mental Health Day, and reminding Arizonans that Tuesday is the last day to register to vote.

Republican opponent Kari Lake said she wasn’t surprised by Hobbs’ “Slave Day” activities, calling her opponent a “twice-convicted racist.” Lake said that Hobbs cost taxpayers $2.75 million, the amount awarded to Adams through the second verdict, but Adams only received around $300,000 according to a maximum set by federal law. The state paid Adams last September.

Hobbs and Lake have essentially tied according to the latest polling. Hobbs has a slim lead of .2 points.