AZ Free News reached out to Kelly for a comment on the dossier and Greenburg’s donation; his campaign was silent, offering no repudiation.

Not all have opted for silence or inaction in the face of the Greenburg dossier, which rose to national prominence within days of initial reports on its existence. On Monday night, the SUSD Governing Board convened in a special meeting to determine Greenburg’s fate as president and a member of the board. They voted to demote him from his presidency. However, Greenburg refused to resign. He stated repeatedly that the board members lacked “all the facts” and urged them not to demote him, pleas made to an unyielding group.

Prior to the meeting, questions arose as to whether Kelly would denounce Greenburg as other Arizona politicians had. He hasn’t, but his awareness of current events in education has been fine otherwise.

Though Kelly has been silent on the dossier threatening the parents and community members of a public schooling system in his state, he took the time to issue a celebratory announcement about public schools hours prior to SUSD’s meeting.

“It’s #AmericanEducationWeek! Public schools are the foundation of our education system thanks to the teachers who dedicate their lives to making sure the next generation is set up for success. It’s our job to support them and make sure they have the resources they need.”

Kelly’s silence on the matter prompted remarks from opponents. GOP U.S. Senate candidate Jim Lamon characterized Greenburg’s connection to the dossier as typical behavior for a Kelly supporter. Lamon issued a statement that Greenburg had been “stalking, harassing, intimidating, and doxxing” parents through the dossier, and called for his immediate resignation.

“Storing parents’ personal information and photos of their children, recording parents with a body camera, taking down license plate numbers, and creating a dossier against parents is outrageous and unethical. It’s no wonder he’s given money to Mark Kelly!” wrote Lamon. “Parents are NOT the enemy!”

The Greenburg dossier served as a reminder of another ongoing controversy: the apparent collusion between the National School Boards Association (NSBA) and the Biden Administration. Days after the White House received a letter from the NSBA requesting an investigation into parents and community members for domestic terrorism, among other things, Department of Justice (DOJ) Attorney General Merrick Garland issued a memo effectively directing the FBI to heed the NSBA’s call.

Since the memo’s publication, it’s come to light in email records and other paper trails that the White House collaborated with the NSBA on the submission of their letter. 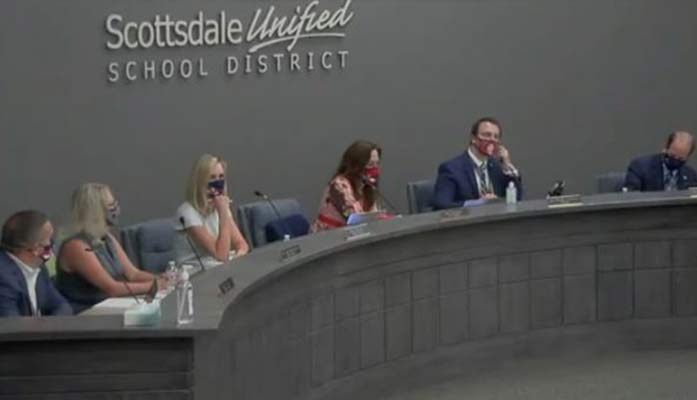 Scottsdale Unified School Board Shuts Down Parents, Describes Them As “Mob”

The Scottsdale Unified Governing Board canceled its meeting on Tuesday, May 18th, 2021, according to Board President, Jann-Michael Greenburg, because of “a belligerent mob.” Greenburg was referring to the parents who had come to the meeting hoping to be heard on the subjects of masks, and Critical Race Theory-based curriculum.

Even though the Board was, admittedly, well aware and prepared for the number of parents that came to attend the meeting, they still chose to recess the meeting after three minutes. The Board then opened the meeting again just long enough to scold parents before gaveling it to an end.

In an interview on the James T. Harris show on KFYI News Talk 550 AM, one attendee, Amy Carney, stated that while she had never attended a school board meeting before, the pandemic opened up many parents’ eyes to what is happening in schools and what is not happening in schools.

Carney explained that more and more parents began asking the same questions and before anyone knew it, parents are “now awake.” That “wokeness” is fueling the increase parent participation on the school board level.

Carney was shocked by the Board’s decision to shut the meeting down as the parents were neither belligerent nor out-of-line. According to Carney, the parents went from determined to defeated after the Board exerted their power. They may have felt defeated, but it was only momentary. Carney vowed future engagement as have parents across the state once they experience the heavy hand of bureaucrats.

That parental population is growing. The Scottsdale Unified School District Governing Board isn’t the first board that has decided not to hold a meeting because they disagreed with the parents that showed up. Just recently the Vail school board shut down a meeting rather than allow parents to speak.

Across the state, groups of parents are organizing to take back the education of their children, ensuring that the Scottsdale Board was not the first to face a “mob,” of mid-mannered parents, nor will it be the last.