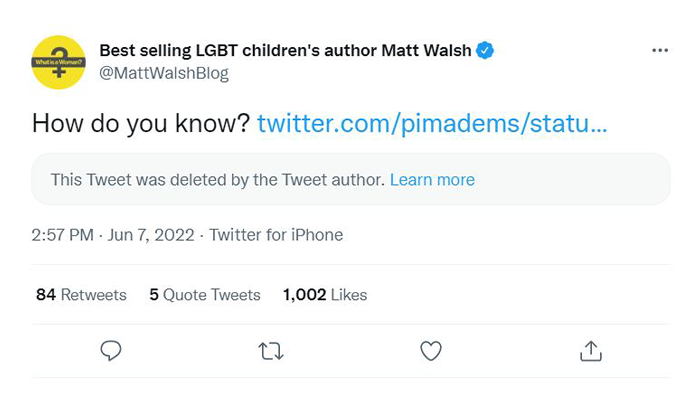 The Pima County Democratic Party deleted a tweet mocking Texas college students after a conservative pundit pointed out the flaw in their logic.

In the tweet, the Pima County Democrats observed there weren’t any women present among the group of University of North Texas (UNT) Young Americans for Freedom (YAF) members watching the newly-released, controversial documentary, “What Is a Woman?” by The Daily Wire, a conservative media company.

The conservative pundit and host behind the documentary, Matt Walsh, responded to the Pima County Democrats to ask how they would know there weren’t any women present, an allusion to the purpose of his controversial documentary: fleshing out the theory of biological sex advanced by transgender ideology and defended by most Democrats in which objective truth doesn’t exist.

Walsh’s response prompted the Pima County Democrats to delete their tweet. As of press time, they haven’t explained their rationale for retracting their remark.

In the documentary, Walsh travels internationally to interview various practitioners, activists, academics, and even an African tribe to discover the definition of “woman.” Those that support transgender ideology insist that no one definition of “woman” exists beyond what individuals who identify as women decide for themselves. In short, a circular definition rooted in relativism.

At the end of the documentary, Walsh returns home from his travels to ask his wife to define “woman.” Walsh’s wife responds with the objective truth.