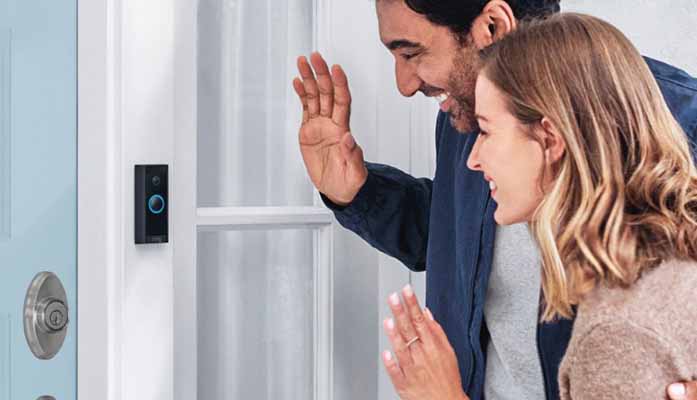 Doorbell Recordings Are Popular And Useful To Police, But Who Is In Control Of Your Privacy?

This week’s viral doorbell videos of a UPS driver fainting outside a Scottsdale home and a squadron of javelinas tearing up a newly landscaped yard in Oro Valley are just the latest example of what homeowners, renters, and business owners might see or hear recorded on their devices.

Many of those types of videos and audio recordings are shared on social media by the device owners, while frequently other recordings are voluntarily provided to law enforcement agencies in response to reports of nearby crimes and accidents.

But who actually owns the right to video and audio recorded by Amazon-owned doorbell company Ring, and who can release those files without a search warrant or permission of the person who owns the equipment? And what if the recording captures something a bit more, um, personal and private?

Those are some of the questions being discussed as members of Congress continue to debate the proposed Facial Recognition and Biometric Technology Moratorium Act. The debate gained some momentum last week following Ring’s admission that company employees have shared video and/or audio recordings with law enforcement agencies without notification to the device owners.

The information about Ring’s activities became public courtesy of U.S. Senator Edward Markey (D-Massachusetts). It shows that the company receives so many requests for video and audio recordings that it has now registered nearly 2,200 law enforcement agencies to better facilitate access.

The vast majority of the releases stem from court ordered search warrants and subpoenas which are normally shared with customers. However, Ring confirmed it has made 11 videos available this year to various law enforcement agencies without advising the device’s owner. The release was based on an “emergency circumstance exception,” according to the company.

The Facial Recognition and Biometric Technology Moratorium Act would set parameters for the collection, storage, use, and third-party release of facial, voice and other biometric data. It would also allow for the withholding of certain federal monies from states and local governments which do not agree to follow the Act.

“As my ongoing investigation into Amazon illustrates, it has become increasingly difficult for the public to move, assemble and converse in public without being tracked and recorded,” Markey said in a statement.

The information released by Markey’s office noted most consumers are not aware Ring’s products typically have been set by default to record. This could result in private acts and conversations being recorded without the homeowner’s knowledge. Such information is then theoretically accessible by the company to share as they wish.

“We cannot accept this as inevitable in our country,” Markey said. “Increasing law enforcement reliance on private surveillance could become central to the growing web of surveillance systems that Amazon and other powerful tech companies are responsible for.”

There are identical bills currently assigned to committees in the U.S. Senate and House of Representative. Neither is co-sponsored by any of Arizona’s Congressional delegation.