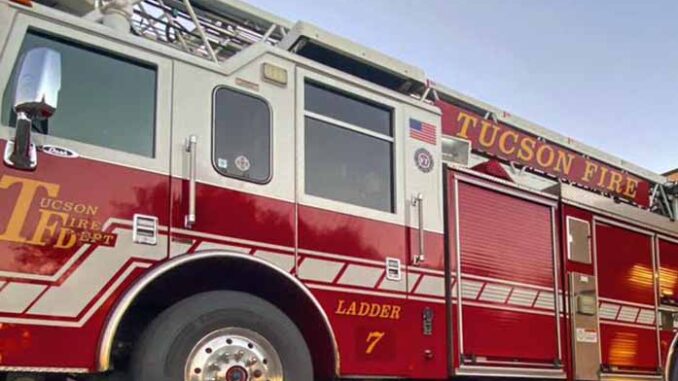 Approximately 1 in 5 Arizonans reside in a fire district, but a new sales tax proposition wants all Arizonans to foot the bill. Firefighter union leaders say that it’s only fair, given the massive amount that tourists spend in the state. Yet, opponents of Proposition 310 warn that the sales tax generating hundreds of millions every year not only avoids transparency of expenditures — they say it also would set a precedent for all Arizonans to continue footing the bill, even when they don’t benefit.

Proponents of Prop 310 insist that it will help underfunded rural fire departments and improve response times. However, unlike a specific allocation by the state legislature from the general fund, a sales tax wouldn’t require fire departments to disclose how they spent those funds.

One concerned resident of Yavapai County, Dwight Kadar, relayed this information during three live town hall meetings hosted by the Arizona Secretary of State on October 1, 3, and 4. Kadar told AZ Free News that, at most, rural fire districts would see 25 percent of that sales tax revenue.

“Instead of the legislature working with the union to identify what’s a troubled fire district and appropriate from the $5 billion surplus in the current budget that was just approved, they do a one-size-fits-all from a sales tax. Had the state appropriated money targeted to those districts, those districts would’ve been required by law on how they spent the money,” said Kadar. “They have gotten the citizens of Arizona in the corner. Any shortfall in their pensions, we taxpayers have to make up.”

Kadar also revealed that Professional Fire Fighters of Arizona (PFFA) union members were telling residents, especially the elderly in assisted living homes, that their response times would be slower if Prop 310 doesn’t pass. Kadar said he rejected that claim, and likened PFFA rhetoric to extortion.

“They’re basically saying, ‘If we don’t get money, well, our response time is tied to how much money you give us,’” stated Kadar. “That’s the classic definition of extortion.”

In response to his concerns presented during two of the town halls, Kadar relayed that PFFA President Bryan Jeffries told him that he had no business talking about Prop 310. A representative of Jeffries’ reportedly even falsely accused Kadar of not living in Yavapai County.

Kadar said that the PFFA members ignored proposed alternatives to a sales tax that exist in other states, such as billing non-district residents for services.

Last Saturday, Jeffries published an opinion piece with the Arizona Republic advocating for Prop 310. Jeffries stated that the sales tax cost was low, a penny for every $10, and would combat inflation burdening fire districts.

“In this time of crisis, each Arizona voter has the opportunity to act as our first responders do when they face an emergency,” wrote Jeffries. “Together, we can move toward the crisis and solve it, doing everything in our power to help those in need.”

The Arizona Free Enterprise Club (AFEC), another group that opposes Prop 310, says that the tax increase would come out to $200 million — not PFFA’s estimation of $150 million. AFEC argued that fire districts’ financial woes originated from years of budget mismanagement, not the recent inflation crisis.

“Prop 310 is not the solution, as it increases taxes on all Arizonans to subsidize a few and does not include reforms to ensure responsible and accountable use of taxpayer money in the future,” stated AFEC.

Kadar insisted that Prop 310 would have a snowball effect on the cost to taxpayers, not only with fire districts needing more funding but other groups looking to implement similar sales taxes to meet their needs.

“Who’s going to be the next group that’s going to want to have their own issues paid for by the whole of Arizona citizens?” said Kadar. “It’s only a penny. That’s how it always starts.”