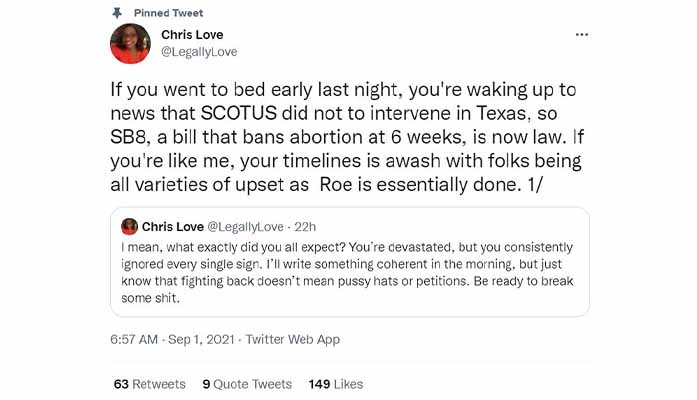 Two of the Arizona Democratic Party’s top leaders apparently want people to riot over the Supreme Court’s refusal to intervene in Texas’s abortion ban. State Representative Daniel Hernandez (D-Tucson) liked and State Representative Diego Rodriguez (D-Phoenix) retweeted a post calling for the public to “break some s***” over the ban.

Both Democrats are running for higher seats. Hernandez is aiming to become the second district’s next congressman, while Rodriguez has his sights on becoming the state’s next attorney general. After news of their support for riots circulated, it appears that Rodriguez removed his retweet. As of press time, Hernandez’s like remains on the tweet.

“I mean, what exactly did you all expect?” wrote Love. “You’re devastated, but you consistently ignored every single sign. I’ll write something coherent in the morning, but just know that fighting back doesn’t mean pussy hats or petitions. Be ready to break some s***.”

Love retweeted the above tweet with further commentary, as promised – a thread of 12 tweets, to be exact. She explained that she knew for years that Roe v. Wade, the cornerstone for abortion legality, was imperfect and doomed to fail. She added that Texas’s fetal heartbeat law was proof of her predictions. Love said that the time for “polite” debate is over, and advocated for people to fight and “shatter this s*** system.”

The entirety of Love’s follow-up post is reproduced below:

If you went to bed early last night, you’re waking up to news that SCOTUS did not to intervene in Texas, so SB8, a bill that bans abortion at 6 weeks, is now law. If you’re like me, your timelines [are] awash with folks being all varieties of upset as Roe [v. Wade] is essentially done. I’m not upset. I’ve been numb to this for a while. We knew this was going to happen. Black women told you think [sic] would happen. THIS Black woman told you it was coming…and many of you rolled your eyes. But the die was cast a while ago. The first sign was Dems doing absolutely nothing to force through a SCOTUS appointment in Obama’s last year. They let Republicans run roughshod and hold up the Garland nomination. BTW, the choice of Garland was a strategy to appease Rs [Republicans]. The thing is, it didn’t work. Never does. Next, white people voted for Trump. Those of you didn’t didn’t [sic] were shocked! Why? Again, many people, especially Black women, TOLD YOU IT COULD HAPPEN. And you shrugged and wore your white suits to the polls instead of making sure “you people” knew what was at stake. As promised, Trump and the Rs appointed some of the most conservative justices to the bench as a whole, not just the SCOTUS. Again, y’all were shocked. Why? They told you that was exactly what they planned to do. But white folks were too busy upholding whiteness to see clearly. Now, Dems are back in the majority. What have they done? Exactly NOTHING. It took 6 months to get the Biden administration to even look at the Hyde Amendment. That dude has never said abortion. Conservative Dems are holding up the filibuster, which limits options in Congress. Simultaneously, y’all kept voting for a**holes in your states. Arizona did, too. Don’t believe that “we went blue” nonsense. We still have [a] Rep[ublican] Governor, AG, and leg[islature]. Legislatures around the country have been working overtime to ban abortion and get a case to this new SCOTUS. When SCOTUS agreed to take the Mississippi case, folks in repro knew what it meant for Roe. So did the antis. I’ve been saying for months that Roe is done and we need to build movement around creating a new abortion rights framework, especially b/c Roe is imperfect. Then last night happened. I know you’re upset, but we’ve had years to recon with what was coming. So, I’m not broken or deterred. I’m ready to FIGHT BACK! Are you? Then stop being polite about this. Stop speaking in hushed voices. Get some courage and shatter this s*** system! To every person who called me dramatic or I said needed to “give Biden a chance” or “stay in your lane,” I hope your eyes are open now. I hope your ears are open now. And I hope you’re ready to fight to protect abortion in this country. Say it with me–ABORTION!  If you’re not sold on abortion on demand and without apology, then it’s well past time for you to get there. If you need a push, I’m happy to discuss. But if you can’t get on this train, then GET OUT OF THE WAY! And with that, all antis will be blocked. Do me a solid and don’t feed the trolls. (emphasis added)