As if small business owners haven’t had enough to deal with, now comes word that Congress pulled the rug out from under a major COVID-19 relief program that was supposed to run through the end of 2021.

Instead, many business owners are left scrambling to adjust their business plan with just three weeks left in the year.

The Employee Retention Tax Credit (ERTC) program was approved by Congress in 2020 to allow many small business owners to offset much of the cost of payroll taxes for those employees who were retained despite the pandemic. The program was to run through Jan. 1, 2022, allowing employers to claim credits of up to $7,000 per employee per quarter for all four quarters this year.

But that abruptly changed when President Joe Biden recently signed the Infrastructure Investment and Jobs Act.

According to the White House-supported legislation, the ERTC program came to a halt as of Sept. 30. That retroactive end means business owners who developed their budget based on claiming the credits Congress previously approved for the fourth-quarter will have a rude awakening at tax time.

Restaurants, retail, and professional services businesses are among the industries expected to be hardest hit by ERTC’s early termination, which was not previously publicized by the Biden Administration.  It has fallen on business and trade associations to get the word out after the fact, but it is feared the message will be too late for many small businesses.

The National Federal of Independent Businesses is encouraging impacted business owners to notify their U.S. Representatives and Senators in hopes Congress will address the problem by restoring the original end date.

Information about the ERTC, including employer eligibility and claiming the credits, can be found at https://www.nfib.com/content/legal-blog/coronavirus/the-employee-retention-tax-credit-erc-what-small-businesses-need-to-know/ 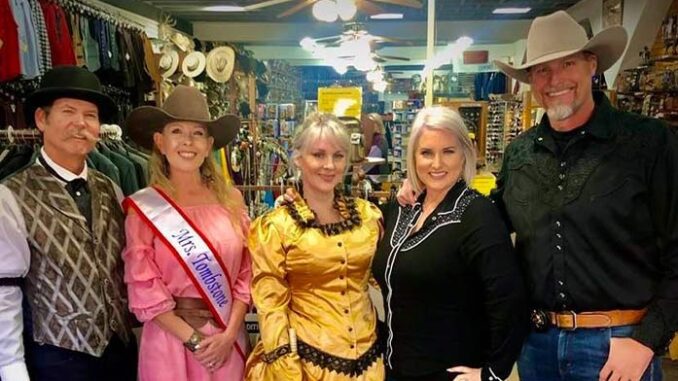 Businesses, Communities Which Depend On Tourism Not Waiting On State Initiative

“Tourism is essential for Arizona’s booming economy and job growth,” said Governor Ducey. “Thousands of Arizonans who work in the tourism industry were displaced due to the pandemic. Now that our economy is strong, jobs are readily available and visitors are coming to our beautiful state, we are making sure employment opportunities continue to grow for hard workers across Arizona,” the Governor said.

But many communities and businesses which heavily rely on tourism are not sitting back waiting on state officials. That is especially true in Tombstone located in central Cochise County.

Tombstone’s numerous small businesses were decimated by last year’s COVID-19 lockdowns, social distancing requirements, and travel restrictions which prevented any semblance of a 2021 winter tourist season. As a result, business owners are ramping up event promotions and advertising, and have started collaborating on new events, including several not directly focused on the city’s Old West history.

“We certainly welcome any support Governor Ducey can provide, but those of us in Tombstone cannot wait weeks or months for state agencies to decide how to give out the money and who gets it,” said one longtime business owner. “It’s imperative we take steps now to ensure our survival.”

For years the big attractions in Tombstone have been Helldorado Days (first held in 1929), Vigilante Days, and Wyatt Earp Days. But after baby-boomers visit once, there’s not much to bring them back again. “And we see younger people are not all that keen on watching show, they want activity.”

So new events are being offered to garner not only traditional tourists, but also long-weekenders from New Mexico and California, day-trippers, and local residents.

One of those event coordinators is Sherry Rudd, co-owner of the Tombstone Mustachery. Rudd created Doc Holli-Days in August 2017 with movie star Val Kilmer (of the movie Tombstone) as grand marshal. More than 10,000 people descended on the city, known by locals as the Town To Tough To Die.

Actors Dennis Quaid was grand marshal in 2018 and Michael Biehn held the honor in 2019. COVID-19 tried to kill off Doc Holli-Days 2020 but Rudd held a scaled down event with westerns actors Buck Taylor and Peter Sherayko as featured guests, even though the parade activity has been dropped.

This year Rudd is bringing in country crooner Aaron Tippin for Doc Holli-Days on Aug. 14 and 15. Tippin will put on a concert at Old Tombstone Western Theme Park, and comedian Josh Pray is also making an appearance over the weekend.

But events require a lot of support. One of Tombstone’s biggest fans is the family which owns Arlene’s Gallery, an upscale jewelry and art store that opened on historic Allen Street more than four decades.

Over the years the business has grown to include Arlene’s Southwest Trading Company, Arlene’s Southwest Silver & Gold, and the Branding Iron, which sells authentic western wear. All of which have sponsored various events including Doc Holli-Days.

Store owner Adam Klein, whose mother founded the business, appeared on a Tucson news show to promote Vigilante Days, while also showcasing some of the store’s one-of-a-kind jewelry. Klein also produced a 15-second commercial that can be easily shared via social media to draw attention to both Tombstone’s Old West history and the stores’ offerings.

Klein has also launched an updated website which allows online sales and ensures tourists who come to Tombstone know what the stores offer.

“Many of the visitors who come to Arlene’s remark that they didn’t expect to find the Tombstone shopping district so vibrant—or to include artwork and jewelry,” according to the website. “We take this sentiment to heart, filling our shops with a diverse selection of unexpected items you’d be hard-pressed to find anywhere else.”

Business owners, local politicians, and chambers of commerce in other southern Arizona communities are also recognizing the need to think outside the box.

In nearby Sierra Vista, a city councilwoman worked for several months with Rep. Gail Griffin to have the city declared the Hummingbird Capital of Arizona. The governor signed the legislation in May, triggering several national news mentions of the tourism opportunities in the area.

On July 24, the seven of the wineries and vineyards in the Sonoita-Elgin area are participating in a Harvestfest & Grape Stomp. The event, which has been heavily advertised in Maricopa County, has sold out of VIP tickets but still has about 200 general admission tickets available.

Meanwhile, the Tubac Chamber of Commerce is promoting the November 2021 Tubac Art & Wine Fiesta and is already publicizing the February 2022 Tubac Festival of the Arts, one of the southwest’s longest running art shows.  Advertisements for Tubac’s many events are hitting cities far from Santa Cruz County.