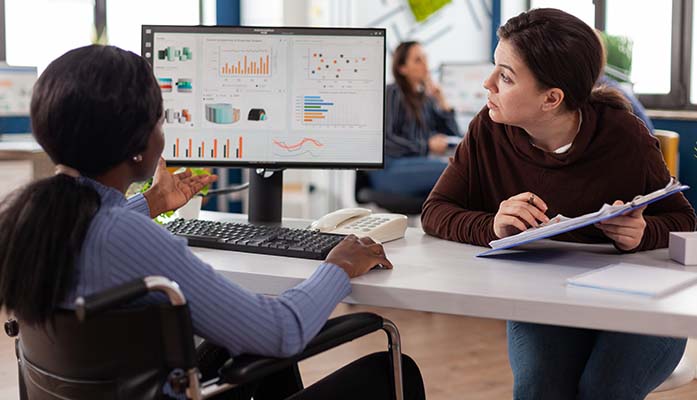 The Flagstaff City Council approved expenditures of over $1.1 million for what it said would improve Americans with Disabilities Act (ADA) compliance for the public library entrance — yet the majority of the project accomplishes sustainability and artistic ends, and the conceptual rendering removed current handicap parking. Construction began Monday.

That artist, Maria Salenger, received a $75,000 contract in December 2020 to create exterior artwork for the library, which includes miniature steel sculptures of open books that will line the pathway and be illuminated at night.

Noticeably absent from the conception drawing are the two handicap parking spaces currently positioned directly in front of the building; there, the city projected the installation of a garden bed. There’s no handicap parking anywhere near the library entrance in the drawing.

A conceptual rendering of the renovations depicts the library with a zigzag of sloped wheelchair-accessible concrete ramps lined with benches, plant beds, and safety railing. One side of the building will have stairs, whereas the current library entrance doesn’t. The new library entrance will also have porch tables and chairs.

The current exterior of the library has two straight, wide concrete pathways leading directly to the entrance, and no stairs.

The city awarded the “Main Library ADA Entrance Project” contract to Scholz Contracting, the only company to submit a bid for the job. The city posted a solicitation for construction last month and closed it after two weeks. In that time, the city received only one bid: Scholz Contracting.

According to the city’s procurement code, invitation for bids must be issued 21 days before the closing date and time for receipt of bids, unless a shorter time is determined necessary in writing by the purchasing agent pursuant to a written request from the department requiring the contract. The city charter requires that public notice of bid invitations must be published at least once in the newspaper, five days prior to the opening of bids.

Funds for the renovation come from the general government and BBB funds for the library. The project is scheduled to take 130 days.