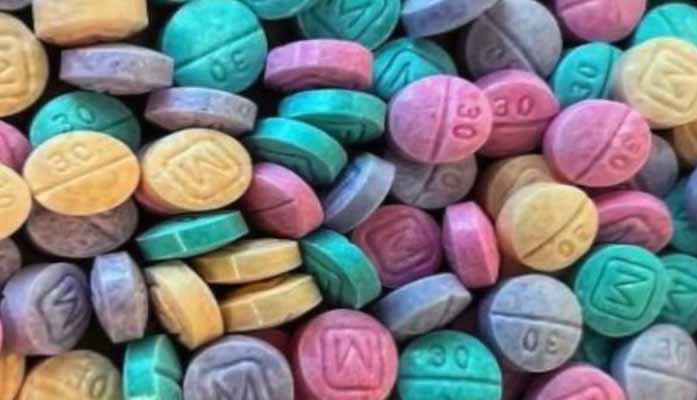 On Monday, Customs and Border Patrol (CBP) busted a vehicle smuggling 233,000 fentanyl pills through a Nogales port of entry. 47,000 of those pills were “rainbow fentanyl,” a new marketing tactic by drug traffickers to entice children and young adults. The remainder were the traditional blue pills usually associated with fentanyl.

It is the latest of many similar busts in recent weeks. Last week, the Arizona Department of Public Safety (AZDPS) busted 46 pounds of fentanyl pills.

According to the DEA, even as little as two milligrams of fentanyl may be lethal — equivalent in size to 10-15 grains of table salt. It’s 50 times more potent than heroin and 100 times more potent than morphine. Approximately 42 percent of pills contained at least two milligrams. By those estimates, the 233,000 pills recovered on Monday could contain a minimum of 97,800 deadly doses. The troopers’ bust last week contained enough fentanyl to kill over 10.4 million people.

During the White House’s daily briefing last Wednesday, Press Secretary Karine Jean-Pierre evaded questions about President Joe Biden’s plans to address rainbow fentanyl and the larger fentanyl crisis. Instead, Jean-Pierre focused on the fact that it was Overdose Awareness Day and that the administration bolstered DHS with $80 million for general drug prevention. Jean-Pierre didn’t identify the root cause of the fentanyl crisis.

Instead, Jean-Pierre claimed that the increased number of drug seizures meant that their administration’s policies were working. She ignored Fox News reporter Peter Doocy’s counterpoint that fentanyl overdoses have increased as well, occurring by several hundred every day. Jean-Pierre also claimed that the Biden administration is successfully securing the border, despite overseeing a historic all-time high of illegal entries into the country.

Health experts warned the Arizona legislature in January that fentanyl traffickers were targeting children. Prior to the rise of the rainbow fentanyl, drug traffickers made fentanyl that looked exactly like prescription oxycodone. These counterfeits are nicknamed “Mexican Blues,” “Blues,” or “M-Boxes.”

Traffickers also disguise other drugs as prescription drugs: methamphetamine as Adderall and fentanyl as Xanax. These counterfeits have disproportionately harmed youth, prompting the DEA to launch an awareness campaign, “One Pill Can Kill.”

The DEA advises those who encounter fentanyl to call 911 immediately.