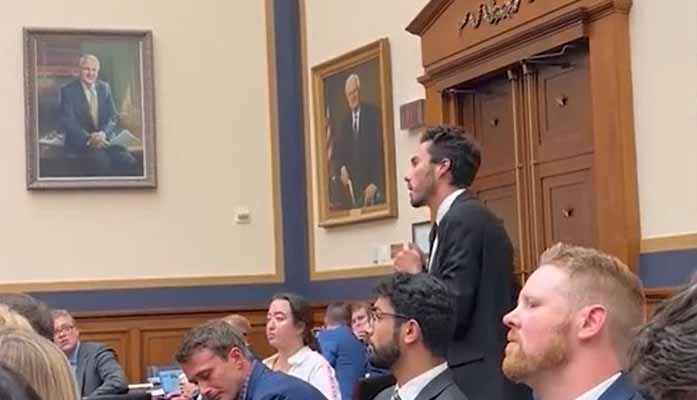 Biggs insisted that the bill would only disarm U.S. citizens as they face an ongoing invasion — his estimation of the border crisis — and the increased levels of crime nationwide. He spoke in support of Congressman Chip Roy’s (R-TX-21) proposed amendment to the bill.

“You have every indication of an invasion and you have disarmed — with this bill you’re going to disarm people. You’re going to prevent them from defending themselves along the border,” said Biggs.

Biggs shared that one of his constituents sold his house and moved due to the border crisis, after having lived there 17 years. The congressman said that this man wasn’t alone, but that many others told him that they feared leaving their homes.

Biggs cited border security data to remind the committee that the cartels were trafficking a torrent of criminals, illegal immigrants, and drugs. He cited the assassination plot publicized in May against former President George W. Bush.

Biggs then asserted that the federal government was sanctioning the cartels’ efforts, purposefully allowing the invasion.

“It’s purposeful on part of the federal government, which has basically sanctioned this invasion,” said Biggs.

It was that comment that spurred Hogg to interrupt Biggs. Chairman Jerry Nadler (D-NY-10) gaveled down Hogg immediately. Police escorted Hogg out of the hearing.

Hogg insisted that Biggs’ remarks were “perpetuating violence.” Hoggs compared Biggs’ argument to those included in mass shooters’ manifestos, insisting that firearms used in crimes were sourced from within the U.S.

Biggs’ remarks began approximately 2 hours into the hearing. On the Republican side of the committee were four signs reading a reference to the Second Amendment: “Shall Not Be Infringed.”

Biggs tweeted that Hogg was a “woke, radical activist” when sharing an interview with Fox News anchor Tucker Carlson. He added that, by Democrats’ standards, Hogg’s interruption was tantamount to insurrection because he interrupted a congressional proceeding.

“He’s trying to grift off this whole thing, it looks like, and he should probably be brought up on charges. Where is that J6 Committee when you need them?” asked Biggs. “Stoking the fire like that is what the Democrats did; that’s why they wanted him there. They were hoping for that kind of incident.”

Hoggs later called Biggs a “white nationalist,” saying that it was a duty to interrupt free speech — even during a congressional hearing — because it was “harmful rhetoric.”