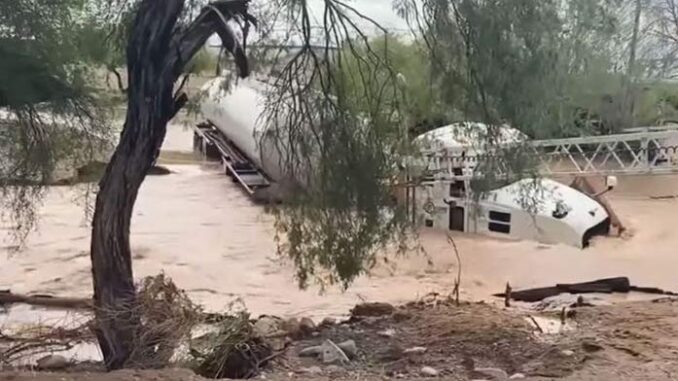 The deaths of at least two residents, along with a costly cleanup and the potential for even more devastation due to the forecast for more rain faces the residents of Gila Bend, a rural area in Maricopa County which suffered horrific flooding early Saturday morning after hours of heavy rain the night before.

A state of emergency was declared Saturday by Mayor Chris Riggs as well as the Maricopa County Board of Supervisors. The same is forthcoming from the State, according to Gov. Doug Ducey.

“Arizona is actively working with local emergency officials to assist in the response to the recent flooding in Gila Bend,” Ducey tweeted after learning of the devastation. “We are in contact with local first responders to provide resources and prepare a state declaration of emergency.”

Gila Bend is a town of about 1,800 located 70 miles southwest of Phoenix. Authorities say rescue efforts were hampered by the fact the area of flooding started in the dark and was widespread across the town. In addition, the monsoon rains were accompanied by a lot of lightening and a main roadway, State Route 238, was impassable in spots between Maricopa and Gila Bend.

About 30 people were pulled to safety from atop their homes by helicopters and roughly 100 residents had to find alternative housing due to the damage. Unfortunately, the mayor confirmed that two people died as a result of the flooding.

County officials activated an Emergency Operations Center near the town to help with coordination of rescue and relocation activities, while members of the Arizona Rangers aided with security and transportation. By Saturday afternoon the water had subsided enough that search and rescue workers were leaving the area, but earlier in the day there were about 90 first responders on scene.

Efforts were still underway Sunday night to account for all residents and visitors in the area.

Meanwhile, county employees were joined by Arizona Department of Transportation (ADOT) workers throughout the weekend to clear roads. The Maricopa County Flood Control District and state officials are expected to be in Gila Bend in the coming days to monitor water quality issues.

Emergency responders are also preparing for the potential for further flooding into Tuesday evening as more rain is forecast to hit the area.