On Thursday, Sen. T.J. Shope, a Republican, joined all the Senate Democrats to kill HB 2190, a bill intended to protect individual medical privacy rights. The bill, sponsored by Rep. Bret Roberts, would have made it a misdemeanor to refuse services to individuals who do not provide proof they are vaccinated for COVID-19.

HB2190, which would have preserved fundamental medical privacy rights, came to be referred to as the “Show Me Your Papers” bill. After the vote, #shopemeyour papers was trending on social media sites.

Sen. David Gowan offered a full-throated defense of the bill:

Shope, according to sources, would settle for nothing less than a codification of an Executive Order issued by Governor Doug Ducey on the subject of vaccine passports. Roberts even allowed Sen. Tyler Pace to amend his bill that weakened individual rights to some extent, but said his bottom line was a prohibition of businesses refusing service to the unvaccinated. Shope refused to afford Arizona that modicum of medical privacy protection.

The ACLU has called the vaccine passports “troublesome,” yet not one Democratic legislator voted to preserve individual medical privacy rights.

Sen. Sonny Borelli voted against the bill at the last minute in order to preserve his right as someone who voted with the majority to bring it back for reconsideration by the Senate. However, in these final days of the Legislative Session, it is unlikely the matter will be brought back.

As a bill to prohibit vaccine passports appears to have stalled in the Arizona Legislature, Congressman Biggs this week introduced his No Vaccine Passports Act to prevent federal agencies from issuing any standardized documentation that could be used to certify a U.S. citizen’s COVID-19 status to a third party, such as a restaurant or an airline.

Biggs’ bill follows a report that the Centers for Disease Control and Prevention (CDC) is encouraging vaccine providers to push people to share their personal health and vaccination data through their smartphones. Healthcare professionals and civil rights activists are now  that surveillance system could be used to create a vaccine passport.

“I am profoundly disturbed that the Biden Administration would even consider imposing vaccine passports on the American people. My private healthcare decisions—and yours—are nobody else’s business,” said Biggs. “Vaccine passports will not help our nation recover from COVID-19; instead, they will simply impose more Big Brother surveillance on our society.

Biggs applauded Florida Governor Ron DeSantis “for being an early leader against vaccine passports at the state level. My No Vaccine Passports Act builds on his efforts and will further protect Americans’ privacy rights and fundamental freedoms.”

On Monday, Texas Gov. Greg Abbott issued an executive order prohibiting vaccine passports. Abbott said a system to track those who have been inoculated against COVID-19 infringes on citizens’ rights.

This is the correct direction to go. Medical records should always remain confidential. No one should ever have to show papers for private medical decisions made between you and your doctor. #VaccinePassport #covid https://t.co/qpIAvvpGav

Arizona State Rep. Bret Roberts has proposed the state-level bill to prohibit vaccine passports. The bill has stalled due to the efforts of at least one lawmaker who believes private businesses should be allowed to require them. 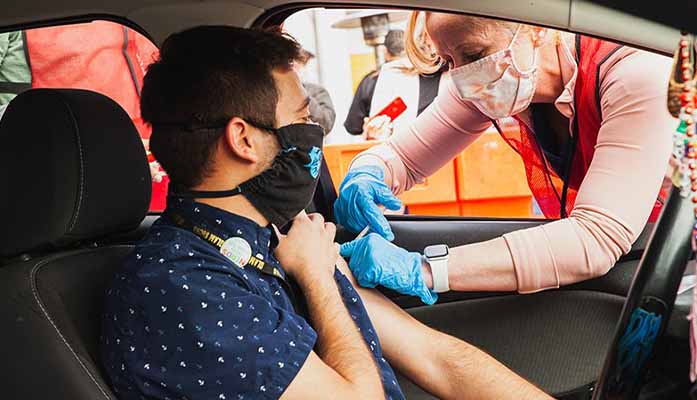 There’s only one reason to require COVID vaccine passports: to coerce people into getting the vaccine. While vaccination is not required, a passport requirement would say, “Whether you get the vaccine is up to you, but if you want to travel or shop or do anything outside your home, a passport is required.”

For those who are concerned about getting the virus from unvaccinated people, get vaccinated! Unvaccinated people pose a very small threat to those who have been vaccinated. Sure, the threat’s not zero, but any time you are around other people, you could catch a cold, or the flu, or Ebola, from them. You could get hit by their cars or knocked down if they bumped into you on the sidewalk. The risk to the vaccinated from being around the unvaccinated is small compared to other risks of being in places where other people are present.