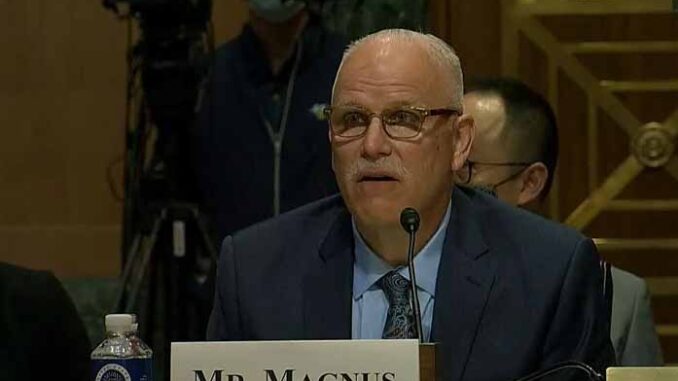 Former Tucson Police Chief Chris Magnus resigned Saturday, less than one year after being confirmed as commissioner of U.S. Customs and Border Protection (CBP), capping a tumultuous and controversial tenure for the longtime city cop.

His resignation was effective immediately, less than one week after the General Election in which border security, or insecurity, was a hot button topic along the southwest border.

The timing of Magnus’s departure raises serious questions about the priorities of President Joe Biden and U.S. Department of Homeland Security Secretary Alejandro Mayorkas to whom Magnus reported.

Mayorkas always expressed public confidence in Magnus, despite intense public objection to the nomination. And neither Biden nor Mayorkas appeared concerned month after month with the increase in the number of large shipments of fentanyl and other illicit drugs making it through the CBP-controlled ports of entry.

In fact, there was little comment from the White House after CBP announced its FY2022 statistics last month. It showed more than 2.2 million “encounters” or apprehension by U.S. Border Patrol along the southwest border, along with more than 172,000 encounters with “inadmissables” at the southwest ports of entry.

Those statistics do not include the estimated 600,000 – 700,000 “gotaways” who were never apprehended at or near the border.

As previously reported by AZ Free News, Magnus came under renewed scrutiny in recent weeks for his lack of attendance at key CBP meetings.

The final straw, however, may have been Magnus’s tone deaf response to a very public incident when outnumbered USBP agents were forced to deploy less-than-lethal munitions to quell an incursion of several hundred border crossers near downtown El Paso on Oct. 31.

Magnus issued a statement the next day in which he noted the CBP Office of Professional Responsibility—which is an internal affairs type of unit—was “reviewing this incident.”

Nowhere in his statement did Magnus bother to comment on whether all agents emerged from the situation uninjured.

Yet it appeared Biden was not willing to suffer any political egg on the face until after last week’s General Election. It was not until Nov. 11 that the first outward signs of discord became public, when it was reported that Magnus rejected an ultimatum from higher up officials in the Department of Homeland Security that he resign.

It is unclear whether the resignation demand was made directly by Mayorkas, but Magnus finally submitted his resignation Nov. 12. It was accepted the same day by Biden, according to a White House press release.

Many eyebrows were raised when Biden nominated Magnus back in April 2021 to head the agency’s 60,000 employees at U.S. Border Patrol, CBP’s Office of Field Operations, and Air & Marine Operations. The agency is also in charge of facilitating international travel and trade.

Organizations such as the Western Sheriffs Association criticized the nomination, pointing out Magnus had no management experience with such a large and critical federal agency.

Others, such as the National Border Patrol Council, pointed to the fact Magnus never worked in federal law enforcement.

There were also concerns about the occasional public disdain Magnus expressed toward the role federal border policies play in protecting national security. Having Magnus at the helm of CBP was seen as proof for some who live and work along the U.S. southwest border that Biden had no concern for their communities reeling from an unending influx of border crossers and illegal criminal activity.

The criticism continued after Magnus was confirmed in December 2021. He was seen as preoccupied with internal issues and establishing a strong esprit de corps rather than ensuring CBP officers and USBP agents have the resources and support needed to do their job.

The announcement of Magnus’ resignation provided no reassurance to CBP’s employees nor the public that new leadership has been identified. For now, it is assumed Deputy Commissioner Troy A. Miller will once again serve as Acting CBP Commissioner, a position he held for nearly 12 months until Magnus was confirmed.

Miller’s official biography shows he began his federal law enforcement career nearly 30 years ago as a Customs Inspector. He has held a number of CBP positions in the years since, including Director of Field Operations for CBP’s New York Field Office where he oversaw a district that included John F. Kennedy International Airport and the New York / Newark container seaport.