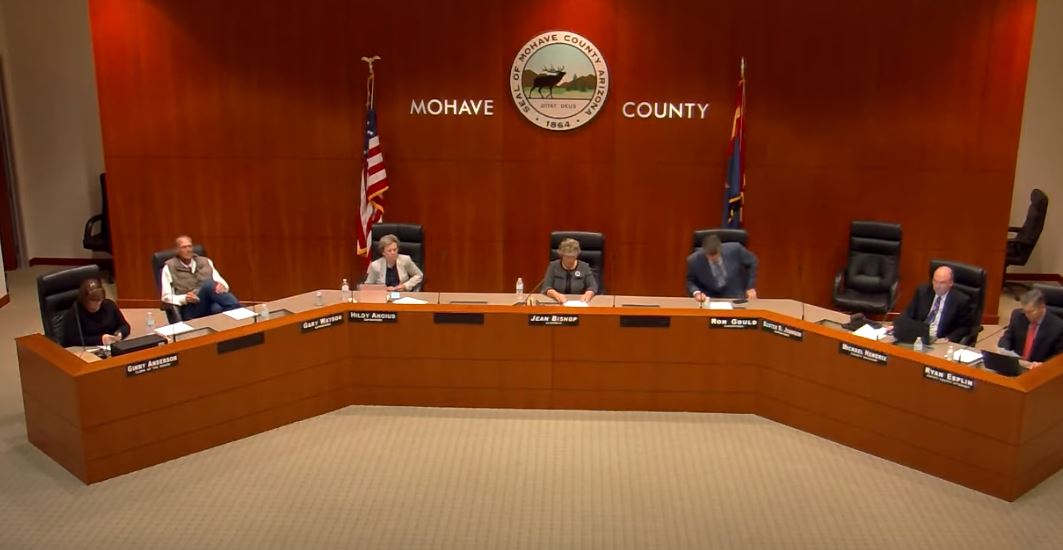 On Monday, the Mohave County Board of Supervisors canceled their upcoming special meeting to discuss potential election litigation against Maricopa County and Secretary of State Katie Hobbs.

The board didn’t offer an explanation for their decision to cancel the meeting. They first announced the special meeting last week.

AZ Free News reached out to the board’s communications director for comment. He didn’t respond by press time.

The county delayed certification of their election results amid expressed uncertainty over the validity of Maricopa County’s results. They certified their results about two weeks ago. Chairman Ron Gould stated during the certification that he was compelled under threat of arrest to certify the results.

“I vote aye under duress. I found out today that I have no choice but to vote ‘aye’ or I will be arrested and charged with a felony,” stated Gould. “I don’t think that’s what our Founders had in mind when they used a democratic process to elect our leaders, our form of self-government. I find that very disheartening.”

The board is facing an open meeting law complaint filed by a Kingman-based political action committee (PAC) for making a “political statement” during certification of the election results. The PAC, Real Change for LD5, named Chairman Ron Gould and Supervisors Hildy Anguis and Travis Lingenfelter in the complaint submitted to Attorney General Mark Brnovich.

“The agenda states ‘discussion and possible action re: Approval of the Canvass of the election,’” stated Gould. “I am sure that the attorney general will agree that the phrase possible action would cover approval and denial.”

Behind the complaint is the PAC founder and chair, J’aime Morgaine. She sued Rep. Paul Gosar (R-AZ-04) in 2018 after he blocked her from his Facebook page; the ACLU picked up the lawsuit after Gosar restored her access and she dropped it. However, the ACLU also voluntarily dismissed the case four months later.

That same year, Morgaine ran an unsuccessful bid for the State Senate. She lost in the general election to Sen. Sonny Borrelli (LD-30).

In a statement, Morgaine called the board members’ protest over the election results a “nasty habit” that undermined confidence in elections.

“The bottom line is this is an election integrity issue,” said Morgaine. “These supervisors have every right to be angry and protest in any personal capacity, but they do not have the right or legal authority to misappropriate Mohave County’s governing forum or taxpayer resources to perpetuate disinformation about Mohave County’s election integrity and undermine confidence in Arizona’s elections.”