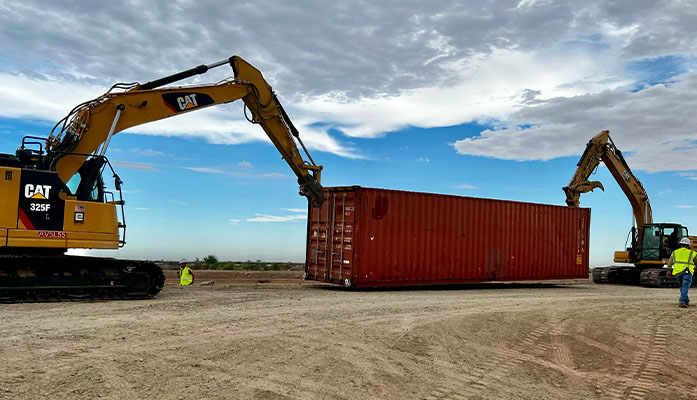 Gov. Doug Ducey signed an Executive Order on Friday for the immediate fortification of a gap in the U.S. – Mexico border in Yuma, just hours before a U.S. Consulate issued a “shelter in place” advisory for Americans living and working in Tijuana south of the border from San Diego.

“For the last two years, Arizona has made every attempt to work with Washington to address the crisis on our border,” Ducey said. “Time and time again we’ve stepped in to clean up their mess. Arizonans can’t wait any longer for the federal government to deliver on their delayed promises.”

The executive order was issued by Ducey a mere two weeks after the White House announced it would address the unsecured border in Yuma once various reviews and studies were completed. However, there was no estimate provided as to when that may be.

“Border communities like Yuma bear the burden of a broken border while narcotics poison our youth, human smuggling rises and mass amounts of migrants wear on our nonprofits,” said Lines, adding that Ducey was coordinating with state and local resources “to do what the federal government won’t: secure the border.”

The project overseen by state contractor Ashbritt will utilize a 25-person team of heavy equipment operators and support personnel to link together and weld shut the containers, each of which weigh more than four tons. When completed on Monday, the new barrier wall will reach about 22 feet and be topped with concertina wire.

The move to close the large gap in Yuma also came just days after President Joe Biden lifted the Remain in Mexico immigration policy which has been providing one of the few immigration controls at the border.

The U.S. Border Patrol’s Yuma Sector under the leadership of Chief Patrol Agent Chris Clum experienced more than 235,000 migrant encounters from Oct. 1, 2021 to June 30, 2022. The governor’s office called it “an ominous acceleration” for the Yuma Sector, which had the highest annual increase in encounters of all USBP sectors for the fiscal year ending Sept. 30, 2021.

Nonprofits and shelters in Yuma County set up to assist migrants have been operating for months at overcapacity. In addition, law enforcement, first responders, and local medical facilities have been overwhelmed by the influx, which includes extremely high quantities of fentanyl coming across the border Arizona lawmakers made a $335 million investment in the Arizona Border Security Fund to construct and maintain a border fence, of which $6 million will be used put the new barrier in place in Yuma.

“Republicans in the Legislature made border security a priority in this year’s budget, and I’m thankful to Governor Ducey for wasting no time in putting those funds to good use,” said Rep. Ben Toma. “Improvements to the border wall will make our communities safer by combating human trafficking and stemming the flow of fentanyl into the state.”

Just hours after Ducey signed Executive Order 2022-04 on Friday, the U.S. Consulate in Tijuana, Mexico warned of cartel violence in several Mexican cities along the border with California, including Tijuana, Mexicali, Tecate, Rosarito, and Ensenada.

The Consulate warning called on U.S. citizens already in those areas to seek secure shelter and remain aware of their surroundings. The warning also advised Americans on the Mexico side of the border to monitor local media for updates and “notify friends and family of your safety.”

The violence, which is due to internal strife within the Sinaloa Cartel as well as pressure from other cartels, is not limited to border communities near California.

Last Thursday, several killings occurred in Ciudad Juarez, a city of 1.5 million across the border from El Paso. The violence started with a deadly fight at a Mexican prison between factions of the Sinaloa Cartel. Within hours, several fires and frequent gunfire was reported throughout Ciudad Juarez, often targeting non-cartel interests.

A statement by Mexican President Andres Manuel Lopez Obrador on Friday confirmed that “innocent civilians were attacked as a kind of retaliation” in connection with the prison fight.