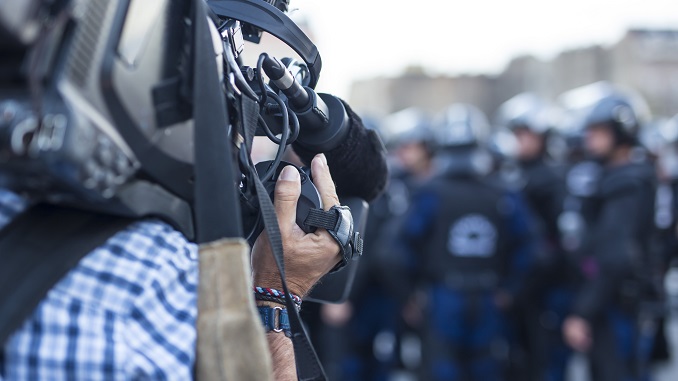 On Tuesday, the American Civil Liberties Union (ACLU) and 10 media companies and nonprofits sued the state over its new ban on recording police within 8 feet. The groups argued in their lawsuit that the ban violates the constitutional rights to free speech and a free press.

The law, HB2319, requires observers to obtain an officer’s permission in order to film within that distance while officers are questioning, arresting, or handling disruptive or otherwise abnormal behavior. If not, the filmer may be charged with a misdemeanor.

However, individuals personally approached or stopped by police may record within 8 feet — so long as they’re not being searched, arrested, or tested for sobriety — as well as bystanders in an enclosed structure of private property where the law enforcement activity is taking place, so long as officers don’t ask the bystander to leave.

The organizations filed the lawsuit in the U.S. District Court for Arizona. Those named in the suit were Attorney General Mark Brnovich, Maricopa County Attorney Rachel Mitchell, and Maricopa County Sheriff Paul Penzone. A spokeswoman for the attorney general’s office told AP News on Tuesday afternoon that they hadn’t received the complaint, and therefore couldn’t comment.

The plaintiffs recounted in the lawsuit how their lobbying efforts to defeat HB2319 failed in the past legislative session.

The lawmaker who came up with HB2319 was State Representative John Kavanagh (R-Fountain Hills), a former New York Police Department (NYPD) officer. In a March opinion piece defending the ban, Kavanagh explained that individuals filming within 8 feet of an officer posed a potential danger to active investigations and arrests.

“Police officers have no way of knowing whether the person approaching is an innocent bystander or an accomplice of the person they’re arresting who might assault them,” wrote Kavanagh. “Consequently, officers become distracted and while turning away from the subject of the encounter, the officers could be assaulted by that subject or that subject could discard evidence or even escape.”

Kavanagh introduced the bill in response to requests from Tucson police officers who experienced bystanders videotaping as close as one foot behind them, even during arrests.