Financial eyes are focused on data recently released by the U.S. Bankruptcy Court for the District of Arizona showing August had the highest number of new filings this year, while also being the first month of 2022 to have more new filings than the same month in 2021.

Bankruptcy filings are considered a lagging indicators of financial stress and economic health, and the number of new filings goes up and down from month to month. However, billions of dollars from various federal stimulus programs have ebbed in 2022, meaning no more Paycheck Protection Program, no CARES stimulus checks to individuals, and the end of the federal foreclosure moratorium.

Some Arizona families and businesses may no longer have a lifeboat, according to commercial debt collection company ABC/Aemga.

“Companies that have struggled throughout the pandemic, but were kept afloat by stimulus money and generous lenders, may face trouble during the rest of 2022 and into 2023 once those funds run out, as the Fed continues to tighten its ultra-loose monetary policy by reducing asset holdings and raising the Fed Funds Rate target, and credit conditions start to tighten,” the company warns.

For the first eight months this year, there were 5,879 new filings statewide, down from 6,765 for the same period in 2021. Slightly more than 12 percent of this year’s new cases were filed pro se, or without legal representation.

While households and businesses in Maricopa, Pima, and Pinal counties lead in filings of as Aug. 31 at 3,887, 896, 439 respectively, Yavapai and Mohave counties have similar totals at 151 and 146 respectively. 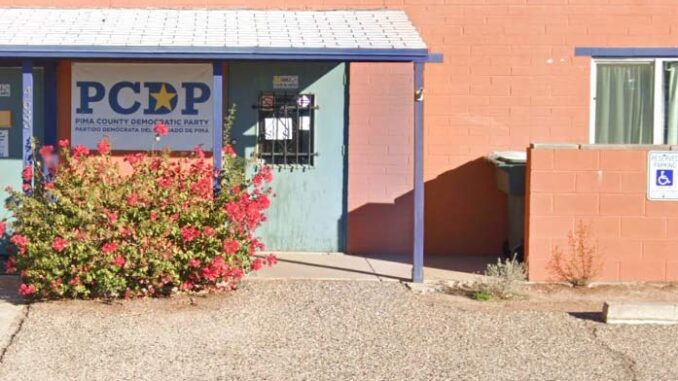 A Pima County Democratic Party tweet sparked outrage this week when it implied only men would be working if families could live on the wages of one working parent per household. The tweet targeted the Republican’s newest entry into the U.S. Senate race, Blake Masters.

Masters asserted that an individual’s wages should be enough to support an entire household in his campaign’s first ad. After naming various threats to the country – China, the media, corporatism, the border crisis, and Big Tech – Masters asserted that the economy should be healthy enough for families to thrive on a single income.

“We’ve got to build an economy where you can afford to raise a family on one single income,” said Masters. “And instead of pretending that we can somehow fix foreign countries, we’ve got to take care of each other, right here at home.”

“‘We need to build an economy where you can afford to raise a family on one single income’ is code for: women should not work,” wrote the Democrats. “#Qnuts #Handmaiden #UnderHisEye #BizarroAd #AZGQP #Bonkers.”

"We need to build an economy where you can afford to raise a family on one single income" is code for: women should not work. #Qnuts #Handmaiden #UnderHisEye #BizarroAd #AZGQP #Bonkers https://t.co/HB0gHO62Da

One twitter user, “shoe,” noted the irony of the dems’ attack:

the future is republicans calling for higher wages and democrats calling it sexist pic.twitter.com/aBSIAqjkbe

Another user responded to @shoe:

What if…just hear me out…the woman worked and the dad stayed at home?

Later that day, Masters shot back at the Pima County Democratic Party. He retorted that the Democrats’ remarks signified that they’d rather have kids penned up in schools all day while both parents are forced to work.

“In @PimaDems’ ideal world, every kid sits at school 12 hours a day so that every parent can work a mind-numbing corporate job in the name of ‘progress’ – pass,” wrote Masters. “‘*Every single parents* working or else we’re oppressed!’ lol, what happened to the Left? (Also, a lot of single mothers are trying to support a family on a single income. That should be harder for the sake of… what? What are Pima Dems really saying here?)”

In @PimaDems' ideal world, every kid sits at school 12 hours a day so that every parent can work a mind-numbing corporate job in the name of "progress" — pass. https://t.co/lAh0e5nugn

Per their official party platform adopted in 2019, the Pima County Democratic Party says that they support increased individual wages. They call for a livable $15 minimum wage that rises with inflation, as well as a universal basic income.

Masters may have an edge in earning President Donald Trump’s endorsement. Masters’ boss Peter Thiel – founder of Thiel Capital, PayPal co-founder and former CEO, and first outside investor and director in Facebook – donated $10 million to Masters’ campaign. It was also Thiel who spoke in favor of Trump at the 2016 Republican National Convention (RNC) in Ohio.