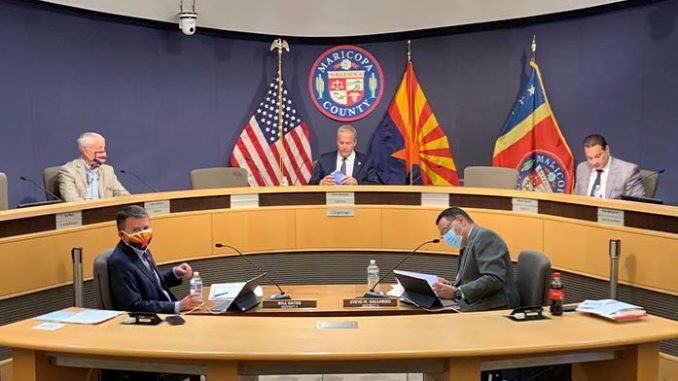 64-year old Mark Rissi reportedly told Hickman in a voicemail last September that he was going to lynch and hang him for being a “lying commie” for supporting the results of the 2020 election. Rissi also issued a similar threat to Hickman via a voicemail left with Attorney General Mark Brnovich’s office in December.

Although the DOJ press release announcing Rissi’s arrest didn’t identify Hickman as the subject of Rissi’s alleged threats, Hickman spoke out in a press release of his own to thank the DOJ and FBI. However, Hickman said that the DOJ’s actions weren’t enough because there were many other threats made to him, fellow supervisors, Recorder Stephen Richer, and numerous county elections staff.

Hickman also chided Arizonans “in positions of power [and] leadership [and] influence” for being silent.

“I’m speaking out today in hopes that others will follow. Whether it’s a person who shares your politics or your worldview or not, no one should be subjected to this kind of hatred,” stated Hickman. “And if we truly want to keep our country great, we will do everything we can to denounce threats against election workers and combat the disinformation that imperils our democracy.”

Maricopa County took another step to counter election disinformation recently. They launched a disinformation center and limited press access last week to control the narrative and manage the flow of information.

So far, the FBI has taken action against those who issued threats to elected officials critical of the 2020 election audit and claims of fraud. They haven’t made arrests for those threats made to Republican officials supportive of the audit, such as death threats given to Senate President Karen Fann (R-Prescott) and State Senator Michelle Ugenti-Rita (R-Scottsdale).

That task force, which launched last June, has reviewed over 1,000 contacts reported as hostile or harassing by the election community. The task force reported that only 11 percent of those contacts warranted an investigation. It’s unclear whether the threats faced by those such as Fann and Ugenti-Rita met the DOJ’s threshold.

CORRECTION: A previous version of this story listed the arrested man as being from Illinois. The man is from Iowa, and the story has been corrected.