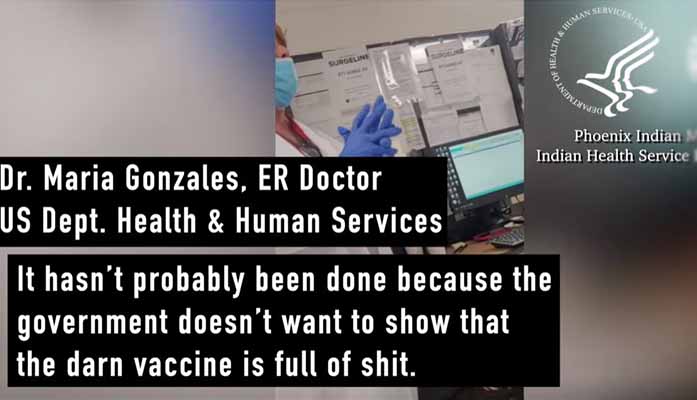 A Department of Health and Human Services (HHS) whistleblower leaked statements from fellow HHS professionals admitting their concerns over the safety and efficacy of the COVID-19 vaccine and current protocols for treatment of infected patients. The whistleblower, Jodi O’Malley, is an HHS nurse at the Phoenix Indian Medical Center who reached out to the nonprofit journalist enterprise, Project Veritas.

O’Malley told Project Veritas in a sit-down interview that she felt compelled to come forward because more patients were coming in with adverse vaccine reactions, yet the government wasn’t reporting them. One of the biggest incentives for O’Malley to speak out was when her coworker passed away after experiencing complications with the vaccine.

One of the officials on video, HHS emergency room doctor Maria Gonzales, expressed frustration with the government’s transparency over the COVID-19 vaccine causing significant numbers of myocarditis cases.

“The government doesn’t want to show that the darn vaccine is full of s***,” said Gonzales.

Gonzales also claimed that the government was hiding the reports of adverse side effects from the vaccine. Gonzales made these remarks in response to O’Malley describing to her a case of a patient experiencing shortness of breath after receiving his second dose of the COVID-19 vaccine, which was later diagnosed as congestive heart failure. The patient’s elevated BNP, D-Dimer, ALT, liver enzymes, PT-INR levels all were indicative of this diagnosis, according to O’Malley and Gonzales in the video.

“All this is bulls***. Now, [the patient] probably [has] myocarditis due to the vaccine. But now, [the government is] not going to blame the vaccine,” responded Gonzales. “[Government officials] are not reporting [adverse COVID vaccine side effects] because they want to shove it under the mat.”

In the sit-down interview with Project Veritas, O’Malley claimed that the patient’s adverse reaction was never reported.

In another clip, Gonzales asserted that health care providers aren’t doing antibody testing on those who’ve been infected.

Another HHS official, a nurse named Deanna Paris, revealed in a separate clip that current protocol for treating COVID-19 patients isn’t adequate. She expressed concern that it was causing people to suffer and possibly die.

“It’s a shame [the government is] not treating people [with COVID] like they’re supposed to, like they should. I think they want people to die,” remarked Paris.

Another clip submitted by O’Malley depicted her conversation with a pharmacist who explained that they weren’t allowed to have ivermectin at their facility. Remdesivir is the only FDA-approved treatment for COVID-19. The FDA doesn’t approve the use of ivermectin to treat COVID-19; they say it hasn’t proven to be safe or effective.

Read our report on the history, cost, and controversy of remdesivir.

“Nobody [is writing up these reports] because it takes over a half an hour to write the damn thing,” stated Paris.

To Project Veritas, O’Malley explained that the method for documenting the safety and efficacy of the vaccine inherently relies on individuals to contribute information to the system.

O’Malley stated further that the vaccine hasn’t been effective in preventing COVID-19. Rather, she reported seeing “dozens” of patients with adverse vaccine reactions.

One of the youngest patients O’Malley recounted was only 15 and experiencing blood clots. According to O’Malley, the other health care professionals couldn’t understand why the patient was having that issue. However, O’Malley believed the child’s condition was due to the vaccine. The young patient had just received their first dose several weeks earlier, and was otherwise perfectly healthy.

Project Veritas asked if O’Malley feared retaliation from the government or her employers. O’Malley said yes, but she’s not entirely afraid because of her faith in God.

“I wouldn’t necessarily say I’m afraid because my faith lies in God and not man. This is evil at the highest level. You have the FDA, you have the CDC, that are both supposed to be protecting us,” said O’Malley. “At the end of the day, it’s about your health, and you can never get that back, and about your freedom, and about living in a peaceful society, and I’m like, ‘no.’ No. This is the hill that I will die on.”