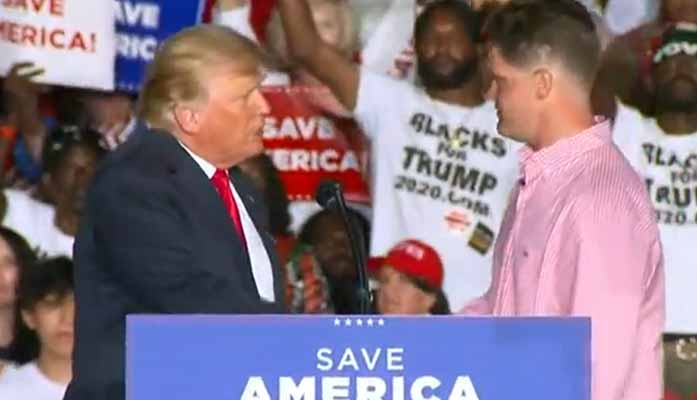 The marine who lifted the two-week-old baby of an Afghan ally to safety from over a barbed wire fence at the Kabul airport in August, Lance Cpl. Hunter Clark, is reportedly under investigation by the military for partisan political activity. Clark’s potential crime? He accepted previous President Donald Trump’s invitation to appear onstage during a “Save America” rally in Georgia last Saturday.

Clark is part of the 24th Marine Expeditionary Unit. The baby’s father, Hameed, had been assisting the Marines with evacuation efforts. For the past five years, Hameed had served as a linguist and cultural advisor to the U.S. military. Clark’s efforts allowed Hameed’s newborn daughter to escape the fray and receive immediate medical treatment before being evacuated with her family to the Phoenix, Arizona area, as reported by AZ Family.

“That day I handed over my baby to a total stranger,” said Hameed. “The only thing I trusted is that he was a Marine, and that my daughter would be safe.”

Hameed said that he hoped to one day meet Clark.

“Oh my God. I’d give him a hug. He literally saved my daughter’s life,” said Hameed.

Task & Purpose first reported on the investigation. A spokesman for the unit, Captain Kelton Cochran, explained that they were investigating to determine if Clark’s appearance and speech violated any Department of Defense (DOD) policies.

“The 24th Marine Expeditionary Unit (MEU) has initiated a command investigation regarding LCpl Hunter Clark’s attendance at the event last weekend to determine if any DOD policies were violated,” said Capt. Kelton Cochran, a spokesman for the 24th MEU. “Any details pertaining to this incident are not releasable while the investigation is being conducted.”

Though Cochran didn’t elaborate on which DOD policies were potentially violated, DOD policy updated a month into the Obama Administration in February 2008 does prohibit active-duty service members from speaking or appearing before a partisan political gathering. The potentially-relevant aspects of the policy are reproduced below:

A member of the Armed Forces on active duty shall not: […] Participate in partisan political fundraising activities[…], rallies, conventions (including making speeches in the course thereof), management of campaigns, or debates, either on one’s own behalf or on that of another, without respect to uniform or inference or appearance of official sponsorship, approval, or endorsement. Participation includes more than mere attendance as a spectator. […] Speak before a partisan political gathering, including any gathering that promotes a partisan political party, candidate, or cause.”

However, there is a certain degree of ambiguity afforded to this DOD policy:

Activities not expressly prohibited may be contrary to the spirit and intent of this Directive. Any activity that may be reasonably viewed as directly or indirectly associating the Department of Defense or the Department of Homeland Security (in the case of the Coast Guard) or any component of these Departments with a partisan political activity or is otherwise contrary to the spirit and intention of this Directive shall be avoided. (emphasis added)

Clark reportedly comes from a military family and attended school in Perry, Georgia.

Clark’s moment on stage was brief. He was overcome with emotion as he stated that he was the individual who saved the infant. He added it was one of the greatest things he’d ever done in his life.

“I’m here from Warner Robins, Georgia. I am the guy that pulled the baby over the wall, and it’s definitely probably one of the greatest things I’ve ever done in my entire life,” said Clark. “I just want to thank all of this support from all of y’all, it just really means a lot. And I’m glad to be home now today, thank you.”

Clark exited the stage to resounding applause and chants of “USA!” from the audience.

Trump introduced Clark after he’d announced that they’d reserved 13 seats in the front row of the rally to honor the 13 service members who lost their lives in the Kabul airport terrorist attack.

“Our hearts go out to the families of every service member that we have lost – and I have spoken to a lot of them. These are great, great people,” said Trump.