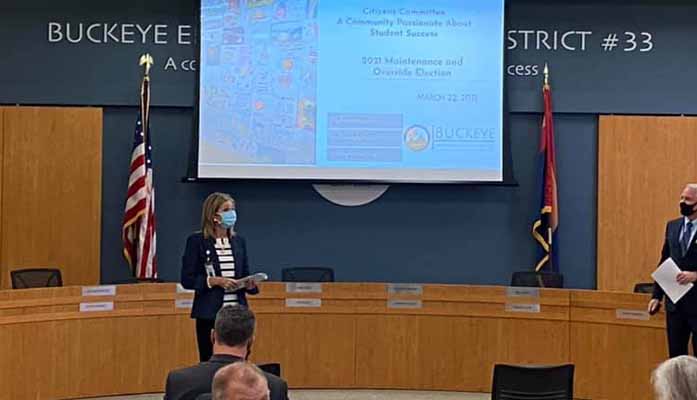 As Its Schools Fail, Buckeye Elementary School District May Have Grossly Overpaid Superintendent

The governing board of the Buckeye Elementary School District is coming under fire after the Arizona Auditor General discovered the superintendent of the 5,100-student district received about 100 percent more in compensation than the superintendents of Arizona’s three largest districts made on average.

Kristi Wilson became superintendent of the Buckeye District’s seven elementary schools in 2013. From July 2016 to December 2021, she received total compensation of more than $3.2 million under the terms of three employment agreements, according to a report released April 12 by Arizona Auditor General Lindsey Perry.

Of that, roughly $1.7 million is categorized as “additional compensation,” including nearly $570,000 which  Perry’s auditors believe was not owed to Wilson.

The report also contends the District “omitted critical information” and records associated with two of the three employment agreements. The auditors expressed concern that there was a lack of transparency which “did not enable the public to monitor the District and superintendent’s performance.”

Any overpayment could constitute a violation of the Gift Clause in the Arizona Constitution, while violations of Arizona’s public records law can be prosecuted in some instances. As a result, the Auditor General’s findings have been referred to the Arizona Attorney General’s Office for investigation.

Data provided by the Auditor General shows 16 percent of the Buckeye District’s  students come from families at or below the poverty rate. And nearly 70 percent of all students qualify for free or reduced lunches.

Furthermore, four of the seven schools had a D or F grade in Fiscal Year 2019. This has resulted in the Arizona Department of Education working with District officials to create an integrated action plan to improve student achievement.

Equally concerning, according to the audit report, is that District students performed below their peer group and students statewide on State assessments in the four fiscal years ending in Fiscal Year 2019. Yet at the same time, the salary and benefits package for Wilson worked out to 54 percent more in per pupil spending for executive administration than the statewide average.

In addition, the average teacher salary in the District was $44,536, about 15 percent below the average in Arizona.

Jane Hunt, the president of the District’s governing board, responded earlier this month to Perry. Hunt did not agree with several of the audit’s findings, but Perry’s staff contends the District’s response contains “certain inaccurate or misleading statements” about the situation.

In one instance, the District contended it had agreed to pay Wilson “a retirement credit” sufficient to cover all tax liability associated it with. Such an arrangement was expressly authorized by the Arizona State Retirement System through the use of post-tax pay, Hunt responded.

But that is not what happened, according to the audit report.

This is an important distinction, Perry’s staff noted, because the District’s failure to correctly apply pre-tax status when calculating Wilson’s additional compensation  led to a significant overpayment “to and on behalf of the superintendent.” And that could lead to legal problems for Wilson and the District Board.

The audit report notes that four of the District’s five current governing board members held such positions in April 2016 when the first of the employment agreements was approved to provide the superintendent with additional compensation.