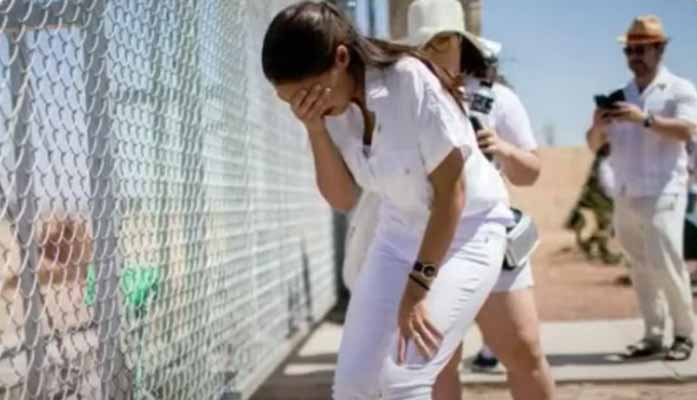 Late last week, the National Border Patrol Council (NBPC) announced that detention facilities remain over-capacity, now over a year into the Biden Administration. The NBPC highlighted the Del Rio sector detention centers, all of which were filled to three times their limit and contained not only adults, but children.

The NBPC railed against federal Democratic leadership, specifically calling out Congresswoman Alexandria Ocasio-Cortez (D-NY-14) and the “lamestream lying media” for choosing to ignore the current situation despite visiting the border when no crisis existed under former President Donald Trump.

The latest data from the U.S. Customs and Border Protection (CBP) revealed that a historic high of illegal immigrants encountered along the Southwest border in February: nearly 165,000. Around 76 percent of those were single adults.

Around the same time, the Biden Administration expressed concerns that lifting the COVID-19 border policies would result in a greater surge of illegal crossings. It’s unclear what data the Biden Administration relied on to believe that their COVID-19 border policies stymied the border crisis in any way, considering the record highs occurring just about every month since President Joe Biden took office.

As noted in separate reporting by AZ Free News and the Daily Caller, the steady stream of illegal immigrants have caused the Biden-prompted inflation and supply chain crises to be felt more heavily by the agricultural communities. Farmers and ranchers have had their land and equipment damaged or destroyed by illegal immigrants trekking through or fleeing law enforcement. In addition to the property losses, those working the land report increased safety issues due to the constant flux of trespassers.

One property owner, Brad Whitaker, explainedto the Daily Caller the extent of damages and heightened threats he and others faced due to the illegal immigrants. Whitaker said that the illegal immigrants have “no consideration for anything,” citing the masses of trash left behind day after day.

“They caught a convicted felon on the ranch here in November and then they just caught him again last night because he goes back and comes back,” said Whitaker. “Since this administration has taken over, it has just been a complete nightmare […] The holes in the fences that they cut, they come in, they’re tearing up the houses, my skinning shed out there, I can’t keep knives in it because they steal them. They’re pulling batteries out of the deer feeders and tearing up, pulling off the solar panels to charge their phones with. And the trash, it is just unbelievable how much trash.”