Senator Mark Kelly (D-AZ) has decided that he supports ending the filibuster by modifying it through a “talking filibuster,” which would require senators to speak on the floor to block legislation instead of the traditional filibuster requiring 60 votes to proceed to a final vote.

In a statement, Kelly compared the Senate to NASA, implying that the decisive action of the bare majority should outweigh the hesitations of the minority. It is unclear whether Kelly considered the 1986 Challenger explosion before he offered that comparison to justify his decision — the Challenger rocket did make it off the launchpad, but only survived for 73 seconds before exploding and killing the seven passengers on board.

It is also unclear whether Kelly considered the Biden Administration’s botched withdrawal efforts from Afghanistan late last summer, which caused the deaths of 13 service members at the Kabul Airport.

“As an astronaut and a combat veteran, I can tell you that if NASA or the Navy functioned like the United States Senate, we would never get the rocket off the launchpad and in combat we’d never complete the mission,” said Kelly. “Arizonans deserve a Senate that is more responsive to the challenges facing our country, which is why I’ve spoken with Arizonans and my Republican and Democratic colleagues about their views on what can be done to make this place work better. I’ve considered what rules changes would mean not just today, but years down the road, for both parties and all Arizonans.”

Kelly also asserted that modifying the filibuster was necessary because the country needed to protect mail-in voting and thwart dark money’s influence in elections.

“If campaign finance and voting rights reforms are blocked again this week, I will support the proposed changes to pass them with a majority vote,” said Kelly. “Protecting the vote-by-mail system used by a majority of Arizonans and getting dark money out of our elections is too important to let fall victim to Washington dysfunction.”

“And just like that, Senator Mark Kelly shows his true tyrannical beliefs and destroys any long term future he has representing the people of the great state of Arizona,” wrote Grantham. “For a man with such an amazing service record, what a shameful display of partisanship.”

Senators Kyrsten Sinema (D-AZ) and Joe Manchin (D-WV) said they won’t support weakening the filibuster. Last week, Sinema explained in a 20-minute floor speech that scrapping the filibuster wasn’t a “lasting solution” but rather mere partisanship. She described the true issue at hand as the “descending spiral of division” destroying our country. 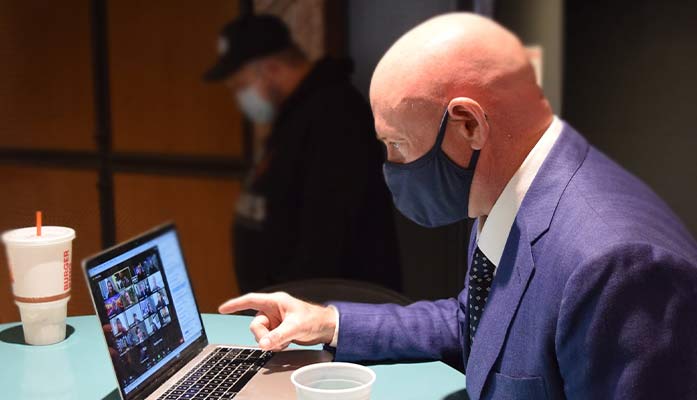 Sen. Mark Kelly is accused of continuing to dodge the question about his support for eliminating the legislative filibuster. Kelly was able to dodge the filibuster question throughout the entire 2020 campaign and recently told the Arizona Republic he was “studying” it.

According to a new report from CNN, “Kelly, an Arizona Democrat up for reelection next year, indicated he hasn’t decided if he backs lowering the 60-vote requirement or if his position is in line with Sinema’s opposition to changing the rules.

Critics say that if the senator wants to please his constituents, he might want to look to a recent Foundation for Government Accountability (FGA) poll to shape his decision. The FGA poll found the majority of Arizona voters support the legislative filibuster because they believe it ensures bipartisanship.

Sen. Sinema on the other hand has been not shy about her opposition to killing the filibuster. Speaking to reporters alongside GOP Sen. John Cornyn in Arizona last week, Sinema indicated that she would not shift from her opposition to changing the Senate’s rules. Sinema argues that it “protects the democracy of our nation rather than allowing our country to ricochet wildly every two to four years.”