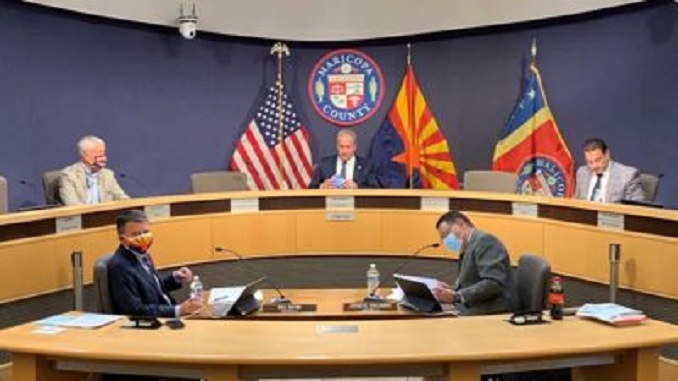 Attorney General Believes Supervisors’ Judicial Appointment Was Unlawful, But Does It Matter?

The Arizona Supreme Court is set to hear oral arguments next month in a case that involves whether the Cochise County Board of Supervisors violated one or more state laws in appointing one of their own to a coveted court position in 2019 without asking if anyone else was interested in the job.

During the June 3 hearing, the justices must decide whether the legal challenge of then-supervisor Pat Call’s appointment to the Sierra Vista Justice was brought forth by someone who had standing to do so. An appointment that Arizona Attorney General Mark Brnovich has described in two legal briefs as “unlawful.”

The case centers on the February 2019 appointment of Call as justice of the peace for Cochise County’s busiest justice court, where more than half of the county’s felony prosecutions start. On the day of his appointment, Call took part in public discussions about how to fill the position and even suggested the board forego forming a committee to seek candidates.

He also took part in a non-public, executive session after which the other two supervisors – Ann English and Peggy Judd- immediately voted Call in as justice of the peace. There was no advance notice of Call’s interest in the position nor that he was being considered for appointment. There was also no opportunity for public comments.

Brnovich has been harsh in his criticism of the supervisors’ actions and he has argued in legal briefings that a judge could still impose sanctions on Call, English, and/or Judd. He has also weighed in on who has standing to bring complaints involving Arizona’s Open Meeting Law and Conflict of Interest statute.

One of those people with standing, Brnovich argues, is David Welch, a Sierra Vista resident who had a misdemeanor case pending in the justice court in February 2019. Welch sued in Cochise County Superior Court just days after the supervisors’ vote in an attempt to void Calls’ appointment due to alleged open meeting and conflict of interest violations.

Welch’s lawsuit was dismissed by an out-of-county judge for a lack of standing to bring the challenge. The judge also said that even if a private citizen had standing, any errors or liability connected to the February 2019 vote were resolved when English and Judd ratified Call’s appointment the next month.

Ratification is a legal process allowing a public body to reaffirm an earlier vote that may have run afoul of Open Meeting Law. But as Brnovich pointed out to the Arizona Court of Appeals, there is nothing in the ratification process which automatically indemnifies a public official from a violation of state law.

He also pointed out there is no ratification process in Arizona’s Conflict of Interest statute, under which public officers like Call are required to announce “a substantial interest in any decision of a public agency” and then refrain from participating in such decision “in any manner.”

The Arizona Court of Appeals overturned the lower court judge’s ruling on standing, finding that Welch, as a taxpayer within the legal boundaries of the Sierra Vista Justice Court, could challenge the appointment. The court of appeals also found Welch had “sufficiently pleaded violations of Arizona’s open-meeting and conflict-of-interest statutes.”

Normally that would have sent the case back to the lower court for further proceedings on the merits of Welch’s case. However, Cochise County officials sought review from the Supreme Court and on May 17 the attorney general filed his second amicus brief about the “unlawful” appointment, the remedies available to a court, and his concern with a taxpayer status threshold for determining standing.

Brnovich points out that standing is already defined in Open Meeting Law as any person “affected by” an alleged violation. Utilizing taxpayer status for status would likely preclude some individuals affected by a violation from being able to assert a claim, he argues. An example is Arizona’s open enrollment policy which allows students to attend a school in one district even if they live in another district’s legal boundaries.

“If a school board were to engage in secret decision-making or other alleged OML or conflict of interest violations, out-of-district parents could be left without standing—even though they would be affected by such violations—because they are not taxpayers of the district,” the brief states.

Oral arguments can be viewed live from the Arizona Supreme Court on June 3 at https://www.azcourts.gov/AZ-Supreme-Court/Live-Archived-Video