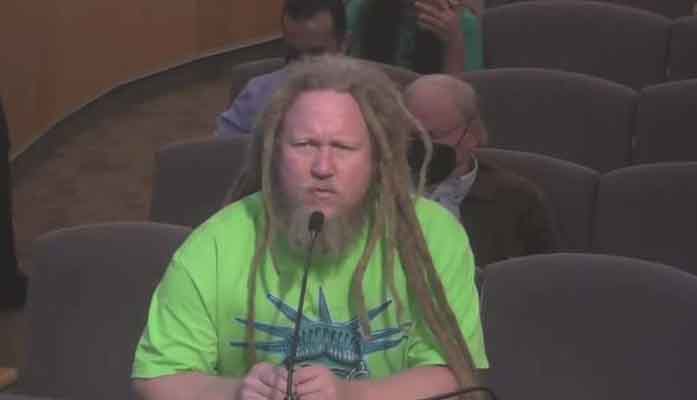 In a press conference on Wednesday, Pinal County shared that the secretary of state’s office supplied them with a faulty formula that led to Tuesday’s ballot shortage across about 25 voting precincts. The county implied that unique voter behavior phenomena exacerbated weaknesses in the formula that caused the shortage.

Pinal County Board of Supervisors Chairman Jeffrey McClure and Pinal County Attorney Kent Volkmer spoke on behalf of the county to address the issue.

Volkmer said that the secretary of state’s office attempts to help counties with a formula to project in-person voter turnout. However, he said that didn’t help in this election due to reports of a substantial number of voters spoiling their mail-in ballots in order to vote in-person, an increased number of “independent” voters requesting Republican ballots rather than Democrat ballots, and a 10 percent population increase since the last election.

“Quite frankly, we underestimated. That’s what happened. There were more people that showed up than we thought were going to show up,” said Volkmer.

Volkmer added that the process of estimating in-person ballots was guesswork, attributing the election night fiasco to “human error” and “training errors.”

“Every elected official is embarrassed about what happened,” said Volkmer.

Unlike Volkmer, McClure couldn’t speak to why the ballot shortage occurred.

McClure said that he wasn’t “entirely sure” how the ballot shortage happened. The county’s elections director, David Frisk, is tasked with ordering the proper number of ballots. McClure relayed that Frisk would likely be removed from his position over this “major screw-up.” However, as one reporter pointed out, Frisk was still overseeing primary election ballot counting, which continued after Tuesday. McClure assured the reporter that the county has “lots of eyes,” implying that they were watching Frisk at work.

Volkmer said that approximately 2.5 percent of ballots were impacted potentially, or about 750 votes. However, the county attorney said that was an estimated guess at best. Of the over 900 ballot types at 95 active polling locations, there were 25 types that either ran low or ran out. Volkmer added that the county’s reporting system for election issues doesn’t allow for differentiation between shortages and total depletion.

“We can’t tell you the exact number [of precincts] that ran out,” said Volkmer. “The actual number of people impacted, we have no way to purely assess. It would be speculation for us to guess the number of people, we can only base it on feedback.”

The county attorney said that just under 300,000 voters were notified of these shortages through their notification systems. Volkmer said a redo of the election wasn’t possible without court intervention.

State Senator Kelly Townsend (R-Mesa) informed McClure and Volkmer that ballots never came for a number of constituents attempting to vote for her. Townsend, who lost Tuesday to State Senator Wendy Rogers (R-Flagstaff) by about 5,000 votes, clarified that she was at peace with the election results.

Townsend asserted that her voters were disenfranchised because they came in the afternoon rather than the morning. She suggested an injunction for those who never got to cast their votes.

“This election has been so flawed and has Fourteenth Amendment issues. How can we proceed forward and say, ‘Oh well, sorry guys’?” asked Townsend.

Volkmer said there was nothing they could do, but reiterated that voters who remained in line were given the opportunity to vote.

State Representative Neal Carter (R-Queen Creek) notified Volkmer and McClure that he attempted to file an injunction on Tuesday as soon as he heard about the ballot shortage. The court system is still processing the injunction.

Volkmer assured Carter that the county attempted to print ballots at a faster pace, but that their machinery was too antiquated to print quickly.

“Counties are responsible for calculating how many ballots to order. Under Arizona law, counties should review their voter registration statistics by precinct and party (for the Primary) to determine how many ballots to order,” tweeted Hobbs. “The Secretary of State determines which candidates and issues qualify for the ballot at the federal, state, and legislative level.”

While Pinal County was struggling with their ballot shortage, Hobbs attended her victory party for her gubernatorial campaign.

On the night of the election, the county attributed the shortage to “unprecedented demand.” They assured voters that they would be eligible to vote so long as they were physically in line by 7 pm.

Pinal County encountered a serious issue with its elections last month as well. The county mailed about 63,000 erroneous ballots, which they resolved by sending supplemental, or “Municipal Only,” ballots. Voters were required to use their original ballot to vote on federal, state, and legislative contests, then use the supplemental ballot to vote on races absent from the original ballot.

Similar to the county’s apologies about the ballot shortage, Frisk attributed the tens of thousands of erroneous ballots to “human errors.”