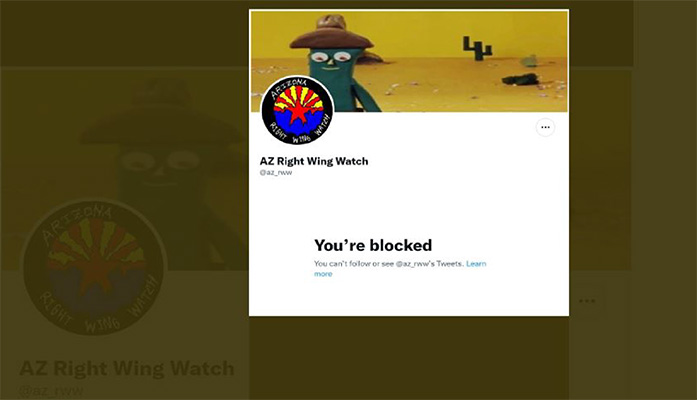 Popular Antifa Account Blocked This Reporter From Following, But Not Mainstream Media

A popular anti-fascist account dedicated to researching and writing about Arizona’s “far-right extremism,” Arizona Right Wing Watch (ARWW), blocked this reporter despite having no direct interactions.

The individual behind ARWW, who we won’t name since she chooses to remain anonymous, is affiliated with a more established Antifa reporting group based in California: Left Coast Right Watch (LCRW). Though ARWW’s block was unexpected, it wasn’t unsurprising. She declared that she doesn’t believe in free and fair coverage across the political aisle.

There are some noteworthy reporters ARWW allowed to continue following her, all of whom work for mainstream media outlets and a majority of whom share similar political views: Garrett Archer with ABC15; Brahm Resnik with 12 News, Jeremy Duda with Axios and formerly Arizona Mirror, Jen Fifield with Votebeat and formerly the Arizona Republic, Tom Porter with Insider, Phillip Martin with WGBH, Jenifer Knighton with Newsbreak, Elliot Polakoff with AZ Family, and Jimmy Jenkins with the Arizona Republic.

With over 14,500 followers, ARWW has a significant presence in the political community and offers unique on-the-ground documentation of political events from the recent pro-abortion protests in the wake of the recent Supreme Court (SCOTUS) ruling all the way back to the first rounds of “Stop the Steal” rallies immediately following the 2020 election. That’s when ARWW first launched: late November.

LCRW’s editor-in-chief is Abner Hauge. He’s long documented Antifa riots, as well as participated in them, and researched what he characterizes as extremist right-wing groups or behaviors.

AntifaWatch, a research organization documenting the far left, identified Hauge dressed as Antifa at a counterprotest at Wi Spa last July — a business mired in conflict after a gender dysphoric man and convicted sex offender, Darren Agee Merager, exposed himself to young girls and women at a spa, and the staff allowed it.

The Washington Post profiled Hauge and others for their research on “right-wing extremists” four days after the January 6 riots at the Capitol. The UC Berkeley Graduate School of Journalism, Hauge’s alma mater, applauded Hauge for making headlines.

A month after the Washington Post mention, Rolling Stone gave Hauge another profile feature as an “undercover anti-fascist.” At the time, Hauge informed the outlet that he went by the “gender-neutral” pronouns “they/them.”

In ARWW’s closing remarks in an interview with “Adventures in HellwQrld,” a podcast focused on the QAnon conspiracy theories and other right-wing politics, she revealed that covering politics wasn’t the ideal lifestyle for her. She said she’d rather get high on marijuana.

“I think if there was no more right-wing s**t I would just turn the computer off and go back to smoking weed on the floor, you know?”