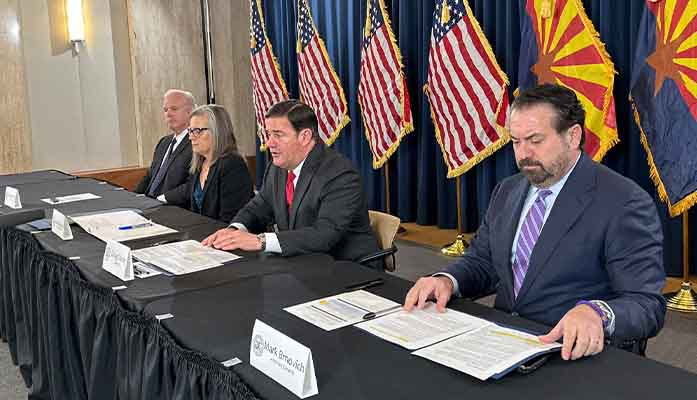 Attorney General Mark Brnovich signaled his disapproval of the election during the statewide canvass certifying the results on Monday.

Brnovich indicated his displeasure with the events of the last month after Secretary of State and governor-elect Katie Hobbs lectured Arizonans that they must combat election misinformation, conspiracies, and critics. The attorney general paraphrased a quote seemingly directed at Hobbs.

“I should note: I didn’t know we were giving speeches today, but the governor and I pursuant to statute are merely witnesses to the certification,” stated Brnovich. “I’m reminded of what John F. Kennedy said: ‘Those who ride the tiger to seek power often end up inside.’”

The quote Brnovich paraphrased came from Kennedy’s 1961 inaugural address. The former president meant it as a metaphor: people who support communist countries in the hopes of benefitting will only be overtaken by them in the end.

“To those new states whom we welcome to the ranks of the free, we pledge our word that one form of colonial control shall not have passed away merely to be replaced by a far more iron tyranny,” stated Kennedy. “We shall not always expect to find them supporting our view. But we shall always hope to find them strongly supporting their own freedom—and to remember that, in the past, those who foolishly sought power by riding the back of the tiger ended up inside.”

“As we gather today to solidify the 2022 midterm election results, many Arizonans of all political persuasions continue to have doubts about our election processes,” said Brnovich. “As attorney general, I have made it one of my office’s highest priorities to defend our election laws and advocate for changes when necessary. I will continue to do so throughout the end of my term.”

Brnovich’s spokeswoman, Katie Conner, stated that people could draw their own conclusions as to what Brnovich meant when paraphrasing Kennedy.

Watch the certification on the secretary of state’s website or below:

On Monday, the remaining outstanding ballots were counted, totaling nearly 2.6 million votes cast. Next Monday is the deadline for counties to canvass and submit results to the secretary of state’s office.

An automatic recount will occur for the attorney general, superintendent of public instruction, and state representative for District 13 races. The recount will begin after the state certifies the election on December 5.

In the attorney general race, Kris Mayes (D) led by 510 votes over Abraham Hamadeh (R) — a .02 percent difference, well within the .5 percent required. Both Mayes and Hamadeh expressed confidence that the recount would pan out in their favor.

Hamadeh pinpointed Maricopa County’s Election Day issues as the reason for his belief that the vote counts would flip in his favor.

In the superintendent’s race, Tom Horne (R) overcame incumbent Kathy Hoffman (D) narrowly with 50 to 49 percent of the vote, or 8,968 votes. That’s a margin of nearly .36 percent, which triggers the automatic recount. Hoffman conceded the race last week.

In the District 13 race, State Representative Jennifer Pawlik (D) is likely to secure one of the seats with 35 percent of the vote, compared to the other two contenders’ respective 32 percent. The automatic recount will likely determine which of the two Republican candidates, Liz Harris or Julie Willoughby, will earn the second seat. Harris leads by 270 votes: nearly .31 percent.

A recount doesn’t look to be in the cards for the much-contested governor’s race. Katie Hobbs (D) ended with a lead of 17,116 over Kari Lake (R): an advantage of nearly .67 percent. That’s outside the margin needed for an automatic recount.

Lake is fundraising currently to file a lawsuit. She has refused to concede the race, citing Maricopa County’s Election Day issues such as faulty ballot printer settings resulting in widespread tabulator failures. The attorney general’s office is probing the county’s conduct for potential violation of state law.

Eli Crane (R) pulled off an upset in the District 2 race, earning 25,019 more votes than incumbent Tom O’Halleran (D): nearly 54 percent of the vote to 46 percent.

Democratic incumbent Representatives Ruben Gallego, Greg Stanton, and Raúl Grijalva fended off their respective challenges from Republicans Jeff Nelson Zink, Kelly Cooper, and Luis Pozzolo in the District 3, 4, and 7 races. Gallego led by 76,124 votes (77 to 23 percent), Stanton led by 32,420 votes (56 to 44 percent), and Grijalva led by 56,974 votes (64 to 35 percent).

Republican incumbent Representatives Debbie Lesko and Paul Gosar were unchallenged in their District 8 and 9 races.