With one week to go before the end of the fiscal year, the Arizona legislature managed to reconcile enough differences to pass a finalized version of the budget. However, Republican legislators opposed to the historic $18 billion budget have reported that the controlling party made the budget more palatable for members across the aisle rather than those of their own party.

Although Democratic legislators initially expressed great frustration about the budget, it appears that they may have feigned their opposition — the overwhelming majority of Democrats voted for the budget.

State Representative Jacqueline Parker (R-Mesa) was one of the legislators that voted against the budget. In a Thursday interview with “Conservative Circus,” Parker talked openly about the backdoor proceedings that went on over the last week, claiming that GOP leadership and Governor Doug Ducey gave Democrats what they wanted at the cost of Arizonans’ best interests.

All throughout Thursday’s voting, Parker offered updates on floor proceedings. She noted the shared levity between the Republicans and Democrats as the total expenditures added up with each bill passed.

Parker also noted that the budget received near-unanimous support from Democrats — unique, since Democrats normally have opposed past Republican-majority budgets.

Contrary to assurances from House Appropriations Committee Chairwoman Regina Cobb (R-Kingman) that the budget would enable the state to “weather the storm” of a future recession, Parker said that the budget provisions would bankrupt the state in a recession.

“Spending is colossal, there are no massive tax cuts, and it’s exceeding our actual fiscal revenues. We’re looking at, probably, future bankruptcy as a recession comes forward,” said Parker.

Parker said that several others brought these concerns to Republican leadership prior to floor votes, but that they were ignored. The representative reported that the leaders were more interested in pleasing Democrats than with working out a conservative budget.

Although school choice advocates touted the universal expansion of the state’s Empowerment Account Scholarship (ESA) Program, Parker reported that Governor Doug Ducey subverted those efforts. Parker said that she and other unnamed legislators received a 2 am call warning that the ESA expansion came with a “poison pill” from the Ninth Floor.

“Ducey has made an agreement with the Democrats that if they don’t refer the ESA bill to the ballot or challenge it in court within the 90 day period, they’re going to extend the aggregate expenditure limit forever, indefinitely,” said Parker.

Parker warned that this secret deal would lead to education expenditures that would break past the 50 percent limit and possibly take over the entire budget.

One of the contentious aspects of the budget was the expansion of homeless shelters throughout Arizona suburbs. State Representative Joseph Chaplik (R-Scottsdale), another one of the lone Republicans who opposed the budget alongside Parker, lamented that the budget policies would turn the state into another California.

Another was the tax credits to entice the film industry to come to the state. The last similar tax credit program bled the state of millions of dollars leading up to the 2008 recession. 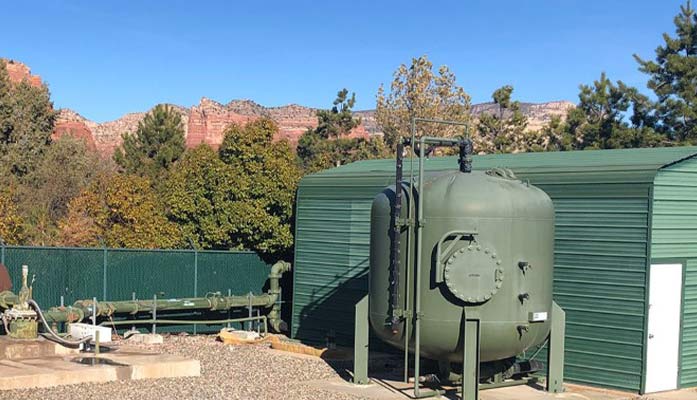