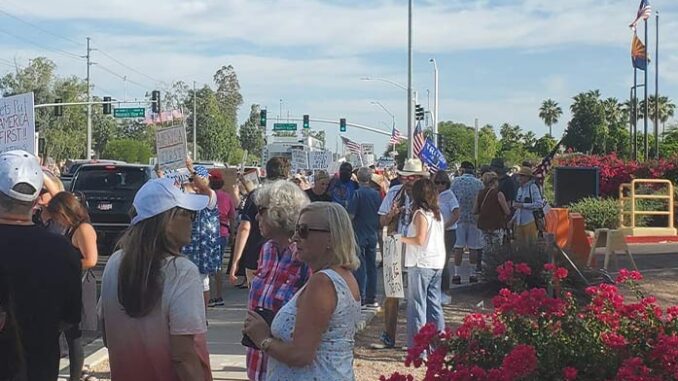 On Wednesday, not only did hundreds of protesters let their concerns about the federal government’s plan to convert a Scottsdale hotel into a migrant detention center be known, but Arizona’s Attorney General did as well.

A crowd of approximately 600 protesters turned out in front of the former Homewood Suites hotel which is just one of many properties included in an $80 million-plus contract Endeavors has with Immigration and Customs Enforcement (ICE).

The hotel-turned detention center is near residential and commercial properties as well as a high school.

Arizona Attorney General Mark Brnovich sent a letter to the hotel’s lender and borrower expressing “grave concerns about whether a detention facility is an appropriate and legal use” of the property.

“I am further writing to express public safety concerns about the decision to establish this 1,200-person detention facility at the hotel property,” the Attorney General wrote.

Brnovich shares the concerns of the community that there is no guarantee the migrants will not be released into the upscale community which has little access to social services.

The appropriateness of placing a detention center in the middle of town is not the only issue. The Arizona Attorney General noted in his letter that even the “lender, who stands to potentially receive some of the revenues from this contract, has itself voiced concerns that this dramatic change in use would require rezoning the property or at a minimum obtaining a variance.”

Currently the case is in federal court. However, Alexander Kolodin, a well known Republican attorney, told the AZ Free News, that he hopes someone will challenge the ICE decision in state court on federalism and separation of powers grounds. “The Arizona Supreme Court would love to sink their teeth into this one.”

I understand that you represent the lender and borrower for a property at North Scottsdale Road and East Mountain View Road in Scottsdale (the “Hotel Property”), which is currently the subject of a dispute over being potentially converted into an under 72-hour ICE detention facility for housing up to 1,200 adult and minor migrants.

I am writing to express grave concerns about whether a detention facility is an appropriate and Legal use of the Hotel Property, particularly in light of information that my office recently learned through a court-ordered deposition of the Deputy Director of the ICE Phoenix Field Office, Albert Carter. I am further writing to express public safety concerns about the decision to establish this 1,200-person detention facility at the Hotel Property. The root causes of the current crisis are problems of the Biden Administration’s own making, including policies that have administratively and intentionally crippled ICE’s important law enforcement mission and incentivized illegal immigration. While everyone rightly expects that migrants should be treated humanely, a new detention facility at the Hotel Property should not be established.

First, regardless of how well-intentioned everyone involved is detention facilities inherently carry some risk that one or more individuals who pose a public safety threat are going to be housed there and potentially leave the premises. As outlined in the lender’s Verified Complaint:

The ICE/DHS Contract provides that the hotel on the Property will cease being operated as a hotel and will instead be operated as an ICE/DHS detention center for immigrant families being held in ICE custody who are awaiting deportation, continued custody, or release determinations by ICE, DHS or the Department of Justice.

The ICE/DHS Contract leaves no doubt that the Property will in fact be operated as an ICE detention center, securing and holding all of the individuals who stay there in government custody at all times, day and night. For example, the ICE/DHS Contract states that “[a]all residents will be in the legal custody of ICE, therefore they can only be released at the direction of ICE” (id. at 60, § 2), and “[a]t all times, individuals comprising family units shall remain in the legal custody office, irrespective of residential services provided by Service Provider.” Id. at 62, § 5(a)(iii), (xi). The ICE/DHS Contract also requires that those providing services at the Prope11y “shall structure all programs and implement strategies designed to ensure residents remain within the residential setting to include, if necessary, consequences for depa11ing without authorization.” Id. at 62, § 5(a)(xi).”

This is consistent with the deposition testimony of Director Carter, who testified that ICE “detention facilities are broken down in multiple ways for immigration purposes. There is an over 72-hour facility where individuals are housed for longer term. But there are also under 72- hour facilities that are generally managed through intergovernmental service agreements that would also be included.” Mr. Carter’s testimony confirms that what is being established is a type of detention facility, not a hotel.

Second, there is no guarantee that housing 1,200 detainees in this area would not result in some of them being released into the community. ICE has adopted irresponsible “enforcement priorities” that administratively repeal almost all ICE enforcement. Those “enforcement priorities” notably do not include those who have previously been convicted of what the Biden Administration deems insufficiently serious crimes or those who have been charged but not convicted of a crime. Given this, if the prime contractor is unable to place particular detainees, it is foreseeable that ICE could simply release the detainee into the community because they do not fall within the Biden Administration’s extremely narrow “enforcement priorities.”

The State of Arizona and State of Montana recently filed a lawsuit in federal district court in Arizona challenging these enforcement priorities as arbitrary and capricious and contrary to law. The potential release of individuals from the detention facility at the Hotel Prope1ty only illustrates why the enforcement priorities are bad policy that is harmful to public safety. See Arizona and Montana v. Department of Homeland Security, No. 21-186 (D. Ariz.).

Third, based on the limited information available, this does not appear to be a good location for a 1,200-person detention facility in any event, and may well or at least should require a significant additional study by the local government before such a drastic change is implemented. The Hotel Property is adjacent to an apartment complex and near a senior living facility. It is also across the street from a residential neighborhood and another apartment complex. It is less than a block from a high school, less than one mile from a preschool, and less than two miles from a middle school.

The lender, who stands to potentially receive some of the revenues from this contract, has itself voiced concerns that this dramatic use change would require rezoning the property or at a minimum obtaining a variance. The Verified Complaint alleges:

The Lender’s application for a temporary restraining order, similarly stated:

It is also very likely that Borrower’s conduct in agreeing to the ICE/DHS Contract and preparing to perform it violated the provisions in the Loan Agreement and Deed of Trust prohibiting Borrower from doing anything at the Prope1ty that might not comply with existing zoning ordinances and prohibiting Borrower from attempting to change the zoning ordinances or obtain an exception or variance from them. See Loan Agreement§ 5.18; Deed of Trust§ 3. Borrower has represented that a zoning change from the City of Scottsdale will be needed to convert the hotel on the Property into condominiums (and has not yet been obtained). In that case, it seems unlikely that the City of Scottsdale would allow the Property to change its use from a hotel to an ICE detention center without requiring even more drastic zoning changes or variances.

Fourth, despite obvious potential impacts from the establishment of the detention facility to the “human environment,” 42 U.S.C. §4332(C), DHS has not conducted any of the necessary environmental analysis under the National Environmental Policy Act (“NEPA”) to study such impacts. See, e.g., Hanly v. Mitchell, 460 F.2d 640, 647 (2d Cir. 1972) (NEPA “must be construed to include protection of the quality of life for city residents. Noise, traffic, overburdened mass transportation systems, crime, congestion, and even availability of drugs all affect the urban ‘environment.”‘ (cleaned up)). Absent any such compliance efforts, the contract with DHS is likely invalid as a matter of law.

This violation of NEPA is part of a broader pattern of DHS failing to comply with NEPA concerning immigration and border control policies. Because of these other violations, I have filed suit against OHS and its officials in the U.S. District Court for the District of Arizona. See Arizona v. 1\Mayorkas, No. 21-617 (D. Ariz. 2021).

For all of these reasons, I urge you not to go forward with converting the Hotel Property into a 1,200-person detention facility.