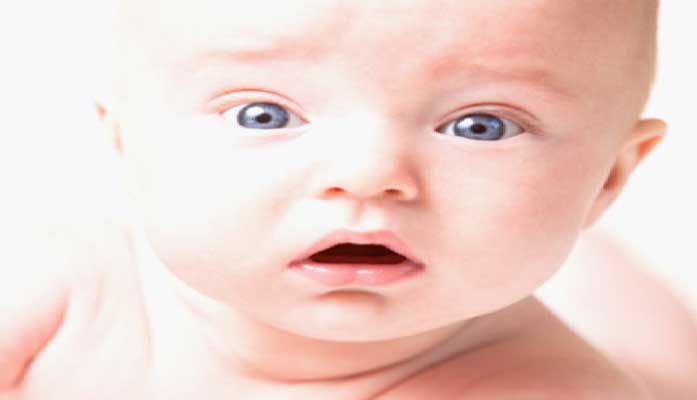 On Tuesday, conservatives lamented Governor Doug Ducey’s decision to veto legislation that would have strengthen parental input in the Sex Education curriculum offered to their children. They also questioned why the governor would then turn around and issue an Executive Order on the subject.

Cathi Herrod, president of the Center for Arizona Policy, said the governor’s veto sent the “clear and deeply disappointing message” to parents that the “government knows better.” She also noted that the governor’s Executive Order “fails to implement the prohibition of sex education prior to fifth grade.”

The bill, SB 1456, prohibits schools from providing Sex Ed to any students below the fifth grade – including education on AIDS and HIV. It also required schools to make all Sex Ed curriculum available for parental review two weeks in advance, at minimum.

SB 1456, sponsored by Senator Nancy Barto, did not prohibit or dictate any curriculum in grades 5-12; it “merely would have ensured parents opt their children into instruction on human sexuality,” according to Herrod.

Barto said that the governor’s veto undermined parent’s rights. She said that the “commonsense bill” aimed to “put sensitive decisions about Sex Ed and parents’ hands.”

“An Executive Order is no substitute for parental rights grounded in law. The bill created workable transparency solutions for parents and stopped Sex Ed for younger school age children – something an overwhelming a mature overwhelming majority of Arizona support,” continued Barto. “The veto undermines every single elected Republican Legislature who voted to defend parents and address the frustrations they face with the current status quo that provides opt out for some sexual materials and opt in for others. Arizona is one of the best states to raise a family, but this decision is inconsistent with that reputation. While I am extremely disappointed, my commitment to parents’ fundamental rights remains unchanged. I will continue to work with my colleagues to protect Arizona parents.”

Herrod challenged statements made by Governor Ducey in his veto letter. Specifically, the governor claimed that he was concerned that child abuse prevention education would be prohibited. Herrod countered that “abuse prevention is not sex education, and would not have been blocked by any provision in SB 1456.

“Unfortunately, to my knowledge, this concern was not brought to the attention of lawmakers by the executive branch prior to the veto.”

“Make no mistake, the need to advocate for the parent’s ability to guide the education of their children, especially with regard to matters of human sexuality,” said Herrod in her press release. “will continue to be a key priority for us, and the many Arizonans who supported SB 1456.”

The governor’s Executive Order requires the State Board of Education to adopt the following requirements by June 30, 2021: 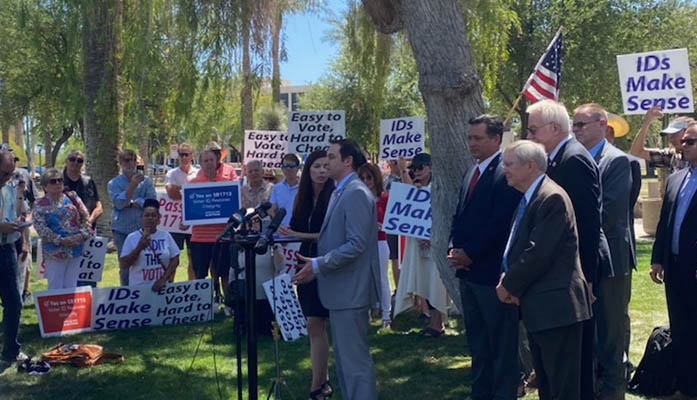 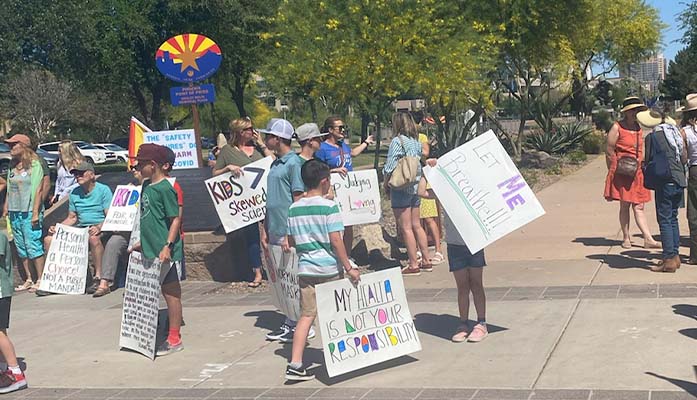 The Governor’s Office noted that with teachers having been vaccinated early on, the decision to require students to wear masks at schools are up to school leaders.

The governor’s action masking edict continues to provide K-12 school districts and charter schools the right to institute and enforce policies to mitigate against COVID-19 spread, including the use of masks.

The governor’s action aligns with CDC guidance and rescinds a section of Executive Order 2020-51, issued by the Governor in July directing schools to require face masks and Emergency Measure 2020-04, issued by the Arizona Department of Health Services (ADHS) outlining requirements for mask usage in schools.

Superintendent Hoffman, in her statement, released Monday, that the governor’s decision was “abrupt” and “destabilizes school
communities.”

Hoffman “encouraged school leaders and board members to work with their communities to make transparent evidence-based decisions to
build trust and the safety of our schools.”

Parents say they are doing just that and are now organizing to change policies on the school level. They say they will begin contacting school officials requesting the end-of-mask mandates on school sites as soon as possible. 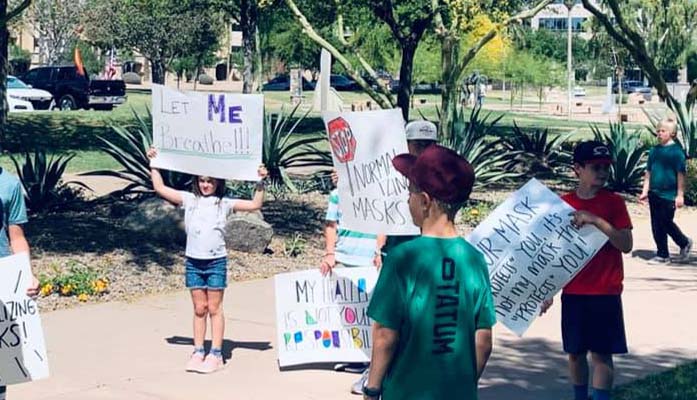 A group of enthusiastic parents, kids, and politicos rallied in front of the Arizona State Capitol on Monday to send a message to Governor Doug Ducey: #Letthechildrenbreathe. The rally, organized by Arizona Stands United, was part of a campaign to eliminate mandatory masks in K-12 schools.

Approximately 100 maskless and smiling attendees listened as young person after young person explained the difficulties of wearing masks in the classrooms.

The rally preceded the delivery of over 10,000 signatures in support of their cause to the Governor’s Office.

Organizers hope the governor will rescind Executive Order 2020.51 which requires masks to be worn by students in traditional and charter public schools.

Jenny Jackson, president of Arizona Stands United, says the group was first made aware of the difficulties kids were experiencing by a member of the group’s Education Committee. The group agreed to take on the cause as part of its commitment to end the current state-of-emergency and what they call “COVID tyranny.”

The “COVID tyranny” has even caused small children to wear masks while participating in P.E. outdoors.

Chloe, a fourth grader, said “Wearing masks makes it hard to breath. I have friends who have asthma and I get scared when they run and start having trouble breathing. I’d feel better if we didn’t have to wear them.”

Parents report children coming home exhausted due to what they believe is a lack of oxygen due to mask wearing.

Jackson says it is unfair that adults have a choice to wear a mask now or not, but kids are given no choice in the matter. It makes it especially egregious, say supporters because there is ample evidence to show that COVID is little threat to otherwise healthy children, they are no longer considered super spreaders, and at this point, most classroom teachers have been vaccinated against the disease. 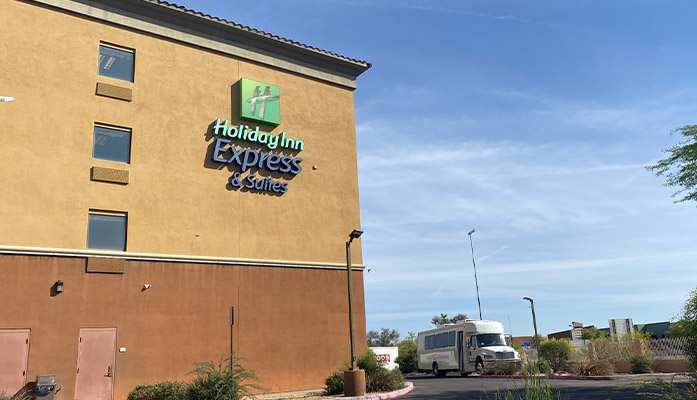 Phoenix City Councilman Sal DiCiccio is urging his constituents to contact Senator Mark Kelly with any concerns they may have regarding Immigration and Customs Enforcement’s decision to set-up shelters for migrant families in the Ahwatukee area.

News of the plans broke last week in the Washington Examiner.

“Hundreds of people who illegally came over the U.S.-Mexico border with a family member will be placed in hotels in El Paso, Texas, and Chandler, Arizona, this Friday as the Biden administration spends tens of millions of dollars to house people despite having its own holding centers,” according to the Washington Examiner.

Although, during two separate interviews in 2019, Kelly said there was a crisis at the border, critics say he seems to be dismissive of the fact that a record number of unaccompanied children crossed the border illegally last month.

According to the Washington Examiner, beginning April 30, “Phoenix’s Sure Stay Best Western motel rooms will hold 142 people as the “Casa de Alegria” or House of Joy. It is located close to the airport.”