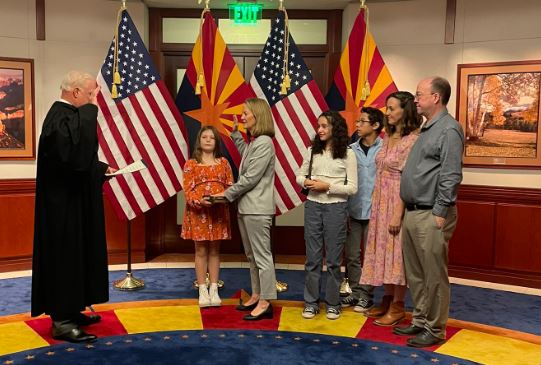 Attorney General Kris Mayes may face a defamation lawsuit after a member of her administration falsely claimed that she fired former Assistant Attorney General Jen Wright.

“In one of her first official acts, newly elected Attorney General Kris Mayes told Wright to resign or be fired, her office confirmed Wednesday,” stated the article.

Wright questioned who in the Mayes administration fed the false claim to the Arizona Republic. Wright shared documented proof from human resources confirming her resignation was effective Dec. 30, along with a Dec. 31 resignation letter submitted to Michael Catlett, deputy solicitor general and chief counsel of special litigation.

Wright also questioned why the reporter, Robert Anglen, hadn’t reached out to her for comment. Anglen admitted privately to Wright in an email that he failed to reach out for comment after claiming to have “just” discovered that she blocked him on Twitter, and that he hadn’t thought to reach out via LinkedIn.

However, Anglen claimed publicly on social media that he had reached out to Wright via LinkedIn for comment; additionally, he reported last November that Wright blocked him.

Anglen also claimed that the source inside Mayes’ office had confirmed that Wright was fired twice.

The Arizona Daily Independent (ADI) confirmed that Wright issued a notice and demand for correction per state statute. If Wright filed a lawsuit seeking damages for the libel, she may be awarded special damages only — unless she can confirm that the article was made with actual malice.

As of this report, the claim that Mayes fired Wright remains in the article.

In a memo obtained by the ADI, Wright informed Anglen and Greg Burton, executive editor of the Arizona Republic, that they needed to correct the article.

“As an attorney, my reputation is a significant part of my ability to get clients,” stated Wright. “The longer you keep up this defamatory article, the more damages I am incurring.”

Former Attorney General Mark Brnovich appointed Wright to lead the EIU when he created it in 2019. Prior to her resignation, Wright investigated hundreds of complaints pertaining to Maricopa County’s administration of the 2022 midterm election.