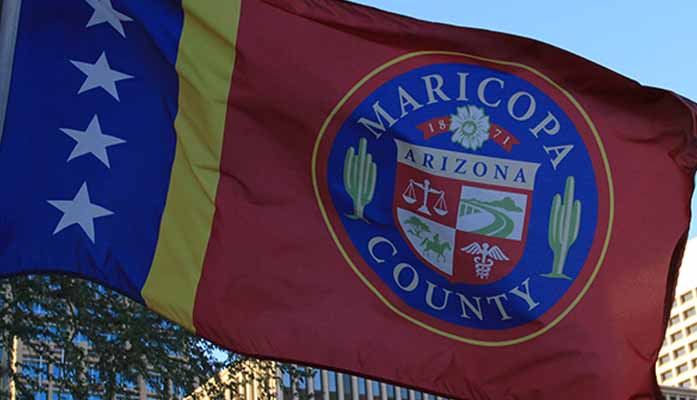 Maricopa County might become four counties, per a new resolution seeking to break up the fourth-largest county in the nation.

HCR2018 wants to shrink Maricopa County, then divide the remaining land into three counties named after Native American tribes that once populated the Valley and southern area of the state: Hohokam, Mogollon, and O’odham. The bill sponsor is State Rep. Alex Kolodin, cosponsored by State Reps. Joseph Chaplik, David Marshall, and Barbara Parker.

Kolodin told AZ Free News that the initiative is a continuation of a bill run last year; however, since this year’s version is a resolution it will ultimately be up to the voters to decide Maricopa County’s fate. Kolodin shared that voters discussed breaking up Maricopa County with him often on the campaign trail last year. The dissent to the proposal that he did hear concerned an increase in costs, but Kolodin said he thinks the opposite would be true.

“It’s never been my experience in government that having it smaller and more conservative increases costs,” said Kolodin. “There’s an optimal size for counties, and that’s not having a county board of supervisors that oversees over three-quarters of a million people. That’s more than a congressman.”

Kolodin noted that Maricopa County residents’ grievances with their current administration aren’t a shared experience by residents of other counties. In fact, he observed other counties having a positive relationship with their board of supervisors during his travels as a lawyer.

“Besides the problems of unaccountable government, people joke about the ‘great state of Maricopa.’ I think there’s lots of Democrats in Pima County that would agree that Maricopa County has an outsized presence. Counties should be relatively coequal entities,” observed Kolodin.

“One thing we’ve learned from this last cycle is that Maricopa County is too big to effectively run itself anymore,” said Kolodin. “It completely screwed up the 2022 election. It’s too hard for them to run it.”

We also asked Kolodin to weigh in on community feedback regarding Maricopa County’s rebranding unveiled last week. Some noted that the new logo intended to depict an orange cactus looked like a middle finger.

“All I can say is these guys have spent the past several years demonstrating utter contempt for their constituents,” said Kolodin. “I’ve been involved in politics for a while, and the constant feeling is [that Maricopa County residents] don’t feel like they’re heard. You never hear that about the State House, ‘Oh these guys are so distant, they’re so inaccessible.’ You might disagree with us, but you would never feel that we don’t care about our constituents. People feel like members of the board of supervisors don’t care about their constituents, and they just feel like they’re not heard.”

Maricopa County has struggled to fulfill basic functions like public record requests or, most recently, complying in a timely manner with an Arizona Senate subpoena.

“They’re trying to run a state with a county’s infrastructure. It just doesn’t make any sense,” said Kolodin. “It gives rise to both arrogance and incompetence. The arrogance is they think they can thumb their nose at the state legislature. It upsets the constituents.”