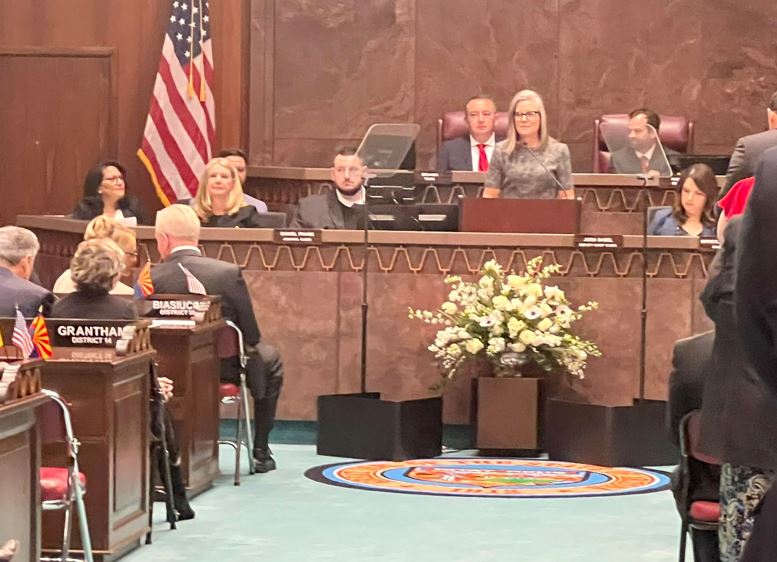 Gov. Katie Hobbs wants to ensure that illegal immigrants get a taxpayer-funded college education; she proposed an initial $40 million investment to realize this goal.

Hobbs issued the proposal during her State of the State Address on Monday in the Capitol. She named the proposed investment after those qualified to remain in the country under former President Barack Obama’s Deferred Action on Childhood Arrivals (DACA) program.

“In line with the will of Arizona’s voters in passing Proposition 308 this past November, my budget allocates $40 million to create the Promise For Dreamers Scholarship Program to cover all students, regardless of immigration status,” stated Hobbs.

Hobbs’ proposal brought some of the loudest cheers from the Democrats on the floor.

In a subsequent statement on Twitter, Hobbs described opposition to Prop 308 and outrage over illegal immigration as “politicized.” She relieved President Joe Biden of much of his responsibility for the border crisis, instead insisting that both Democrats and Republicans were to blame.

Hobbs’ remarks follow the narrow passage of Proposition 308, which awards in-state college tuition rates to Dreamers. The proposition was backed by at least $1.2 million of out-of-state dark money network funding.

Following Prop 308, the state’s universities moved quickly to offer scholarships to illegal immigrant students. Northern Arizona University (NAU), one of the latest, partnered with a scholarship program fund operated by the New Venture Fund, one nonprofit arm of one of the nation’s leading leftist dark money networks, Arabella Advisors. Those eligible for these scholarships include illegal immigrant students eligible for deportation.

Montoya graduated from Arizona State University (ASU) with degrees in political science and transborder studies, with recognition as “Most Outstanding Undergraduate Student,” before earning a master’s degree there in secondary education.

During Hobbs’ address, members of the Arizona Freedom Caucus staged a walkout in protest of Hobbs’ agenda. The caucus criticized Hobbs, claiming that she failed to address the real concerns facing Arizonans. State Sen. Jake Hoffman (R-LD15), the caucus chairman, claimed that Hobbs was exploiting her executive power to a tyrannical degree.

State Rep. Jacqueline Parker (R-LD15), vice chairwoman of the caucus, said that it was wrong for legislators to remain before Hobbs while she spoke, claiming it was complicity in Hobbs’ use of office for activism.

“We could not sit idly by while she repeatedly declared her intention to advance her woke agenda that stands at odds with the people of our state,” said Parker.

Watch Hobbs’ entire State of the State Address below: