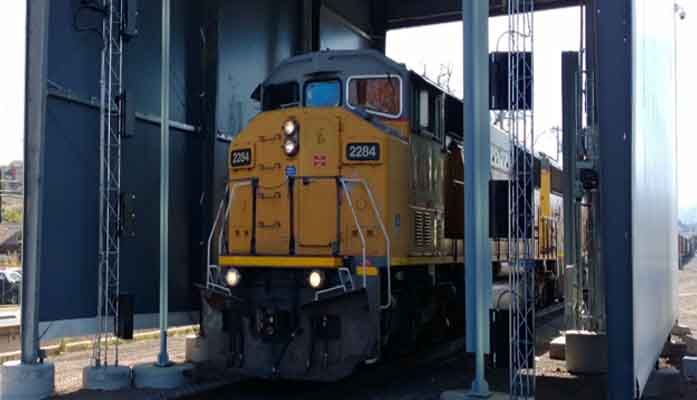 The cities of Nogales, Arizona and Nogales, Sonora signed a Memorandum of Understanding last week that will allow construction of a new international railway crossing and relocation of train tracks to a less urban area east of the current tracks.

The agreement signed by Mayor Juan Francisco Gim Nogales of Nogales (SON) and Mayor Arturo Garino of Nogales (AZ) was witnessed by Heriberto Aguilar Castillo, the Sonoran Secretary of Infrastructure and Urban Development on behalf of the State of Sonora.

Business leaders on both sides of the border have been pushing for decades for improvements to rail infrastructure leading to and at the international crossing. Rerouting the tracks and upgrading the crossing has been a priority for Gov. Alfonso Durazo Montano of Sonora when he took office last summer.

Any financial commitments on the part of the two cities was not revealed during the signing ceremony, but Durazo previously suggested that $36 million (US) would be available from Mexican government entities.

In May, Durazo facilitated a meeting with Union Pacific, Ferromex, and other stakeholders to emphasize his support for the project. He pointed to public safety issues that have long plagued emergency responders on both sides of the border, and he noted there will be a significant increase in demand for expedient freight train service once the Port of Guaymas is upgraded.

An average of 70 northbound trains come into the U.S. through the Nogales Port of Entry each month, with traffic on pace to exceed 800 trains for the first time in more than six years. However, construction of the new crossing is a long way off, as both cities must undertake feasibility studies to identify the best location for the new international crossing and for the layout of the train tracks.

According to the UA Eller College of Management, Nogales has the oldest rail crossing of any border port of entry along the U.S. / Mexico border. Automobiles manufactured at the Ford Motors plant in Hermosillo, Sonora are shipped via rail to U.S. and Canadian markets through Nogales, as are bulk commodities such as cement and agricultural product.

“The dynamics of train crossings, and number of rail containers through the Nogales border port of entry reflect the composite effects of both trade between Mexico, Canada and the U.S., as well as between Arizona and Mexico,” according to the Eller College of Management’s Arizona-Mexico Economic Indicators.

Data provided by the UA Economic and Business Research Center shows more than $11.8 billion in U.S. exports went to Mexico in 2021 through U.S. ports of entry in Arizona. Nearly $10 million of that crossed through Nogales by either vehicle or rail.

Meanwhile, $17.6 million was imported across the U.S. ports of entry in Arizona from Mexico in the same period, with all but $3 billion coming through Nogales.