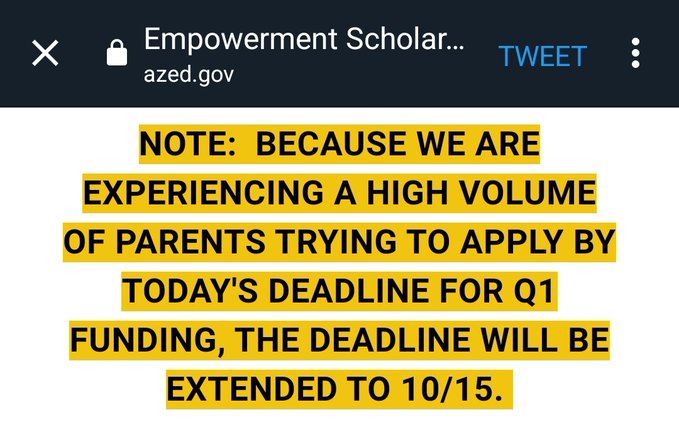 So many parents were trying to apply for Arizona’s expanded Empowerment Scholarship Accounts (ESAs) by Friday’s first quarter deadline that the department of education’s website was overwhelmed, leading to a decision to extend the application period.

“Because we are experiencing a high volume of parents trying to apply by today’s deadline for Q1 funding, @azedschools is extending the deadline to remain eligible for retroactive Q1 funding to 10/15/22,” the department announced midday Friday.

Gov. Doug Ducey helped spread word of the extension while commenting on the tremendous popularity of the new law which now makes all 1.1 million of Arizona’s K-12 students eligible to apply for an ESA which provides about $7,000 per student, per year to assist families in tailoring a student’s education experience to best meet their needs.

The funds can be used for a variety of purposes, including private school tuition, homeschooling expenses, educational therapies, tutoring, and other expenses in exchange for not attending a public school or receiving a tuition tax credit.

More than 12,000 applications have been received by the Arizona Department of Education since the governor signed ESA expansion legislation in June. That outpaces the number of students who were utilizing the ESA program under the old law.

The new expanded eligibility was to take effect Sept. 24 with a Sept. 30 deadline to qualify for first quarter funding. The rush by families to apply this week was bolstered by publicity involving a political action committee’s failed referendum effort to waylay the ESA expansion until voters could decide in 2024 whether it should go into effect or not.

Arizona Secretary of State Katie Hobbs put the law on hold Sept. 23 based on claims by Save Our Schools Arizona that more than 141,000 referendum petition signatures had been submitted to Hobbs’ office. Of those, at least 118,823 signatures needed to be validated to keep the ESA expansion sidelined.

But in a letter dated Thursday, Hobbs’ staff officially confirmed what has been known for days – that the referendum effort failed to come anywhere close to the constitutional minimum number of signatures.

One parent said Friday’s announcement by Hobbs’ office ensures parents are now “rightly in control of their children’s future.”

Christine Accurso of Gilbert is among pro-ESA parents who questioned whether the glaringly insufficient referendum filing was simply a calculated ploy by anti-school choice politicians to freeze funding for children right in the midst of the school year.

“As a longtime ESA parent, I could not be more thrilled to see thousands of new parents benefiting from this program,” Accurso said. “It is my hope that the rest of the country can follow our lead and bring this legislation to their state, so that we can one day see all American children in the school of their parent’s choice.”

Save Our Schools Arizona issued a statement Friday putting the blame for the group’s referendum effort failure on the governor, who is one of ESA’s staunchest supporters.

“We are confident we would have succeeded had Governor Ducey not waited 10 days to sign the bill, robbing Arizona voters of crucial time to sign the petition,” according to the statement.

The group even criticized pro-ESA organizations like the Goldwater Institute for using “sophisticated software” to review the petitions, resulting in Monday’s revelation that Save Our Schools Arizona submitted only about 90,000 signatures.

For school choice advocates like Accurso, the important fact is that the ESA expansion is now in effect. The priority now is to ensure families that still want to apply become aware of the extended Oct. 15 deadline.