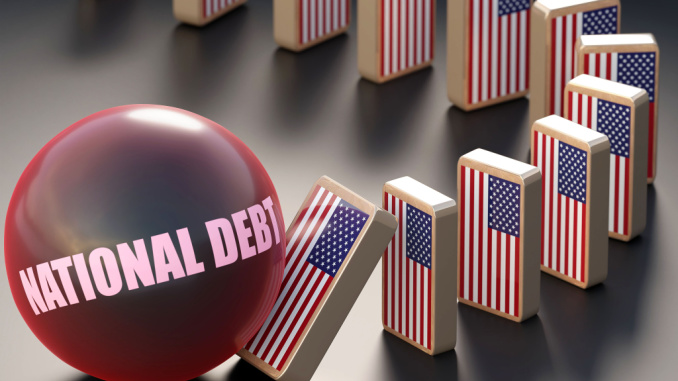 America’s political class can no longer put off the inevitable. They soon will have to pay for their insanely reckless fiscal practices.

It’s not going to be pretty. America’s debt has reached an appalling $31 trillion. Annual interest payments will exceed $1 trillion this year. Debt service is well on its way to crowding out other priorities, a trend which will only accelerate.

Unfortunately, a steep rise in interest rates occurred near the end of the biggest spending binge ever. Economists are warning we are nearing the dreaded “doom loop” in which interest costs can be covered only by more borrowing which further drives up interest expense, creating a vicious cycle.

There is a weird, almost preternatural calm about our dire fiscal future during this campaign season. We’ve seen much consternation about inflation, public safety, the border, and other critical issues. Yet politicians and the media hardly mentioned the debt crisis, so the public seems to assume everything is under control.

It isn’t, not by a long shot. Uncle Sam issued $7 trillion in new debt to finance the recovery from the COVID pandemic and our panicked overreaction to the disease. It’s too bad we can’t take back that $7 trillion.

Much of it was stolen by fraud and bureaucratic bumbling. Funds went to school districts, that haven’t spent them so far, to finance the indolence of those who preferred not to work and to Democrat pet projects like “climate change.” Millions of voters in no distress whatsoever got checks, as did some illegal immigrants.

Many economists predicted that injecting that much cash into the economy would cause inflation, especially since supply was limited by weakness in the labor market, fuel shortages, and supply chain problems. They were mostly ignored but turned out to be absolutely correct. After decades of relative price stability, we are now experiencing 8% inflation with no end in sight.

Millions of non-economists are experiencing what that does to your standard of living. Suddenly, food, fuel, and shelter have become existential concerns to millions of Americans, and the economic future looks dim.

Financial markets cannot ignore the cloud of government debt hanging over our economy. A serious recession will almost certainly soon be upon us. Already, declining stock and bond values over the past nine months assure a steep decline in capital gains tax revenue, another contributing factor to the deficit.

The Federal Reserve board is doing the only thing it can to address inflation, which is to raise core interest rates. That also directly adds to the national deficit, increasing the interest cost and driving up the balance, since no other source of funds is available.

So, to summarize, unnecessary COVID-related spending of $7 trillion has combined with chronic overspending, which caused inflation, which increased borrowing costs, which drove up the deficit, thus precipitating a recession which will deprive the government of revenues to pay down the surging debt load. Way to go, guys.

The principle response of the Biden administration has been denial. Our president claims the economy is thriving. A monthly .1% drop in the inflation rate was the pretext for claiming inflation was in decline. The national debt is never mentioned, nor are the untold trillions in future promises we have made to senior citizens and others.

Instead, Biden issued a probably unconstitutional executive order “canceling” unpaid college loans – i.e., transferring the liability to taxpayers. It was terrible public policy, penalizing those who had behaved responsibly and incentivizing student indebtedness in the future. It spent yet more money in a desperate attempt to bribe some votes for the midterm elections.

Yet there seems to be little taxpayer resentment. Why should they care? Their taxes aren’t going to increase. The obligation will be added to the great river of debt passed on to future generations—you know, those little people who don’t vote yet.

They will inherit an America feeble and impoverished, that will have forfeited its greatness because of our greed and selfishness. STOP THE SPENDING!