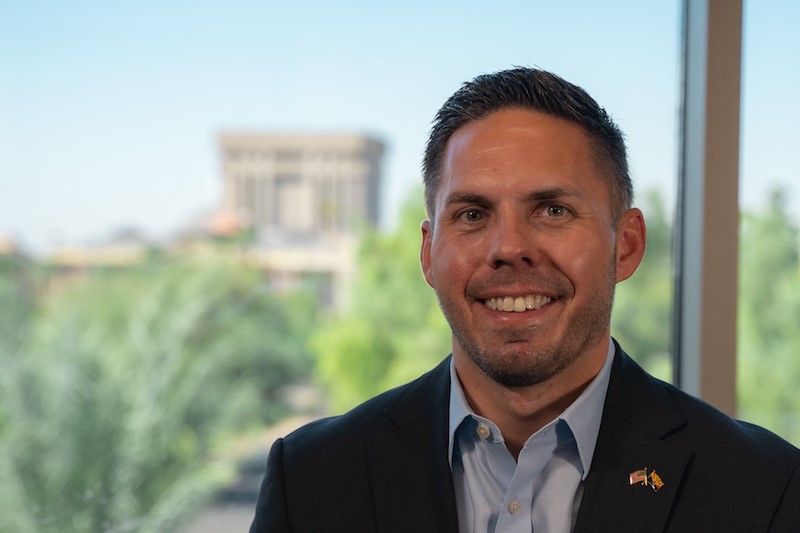 Gov. Doug Ducey’s recent decision to use state-owned shipping containers to close five gaps along the U.S. / Mexico border in Yuma County has helped better identify other vulnerable areas, including a stretch of unsecured border on land belonging to the Cocopah Indian Tribe.

“It is a known vulnerability, I think it’s pretty obvious to everyone down there,” Tim Roemer, director of the Arizona Department of Homeland Security, said Thursday about dozens of people who cross into the U.S. via tribal lands each week, some without presenting themselves to federal authorities.

Roemer told KFYI’s James T. Harris that the temporary shipping container project was “a good step in the right direction because it’s going to highlight where the weaknesses are at other points.” One of the most exploited weak points is at the end of one segment of the state’s border barrier next to Cocopah tribal land.

Tribal officials have complained about the state’s construction of the barrier, which they contend encroaches several feet on the tribe’s property. Roemer did not openly criticize Cocopah tribal officials, but said knowing where vulnerabilities exist is “going to put more pressure on other people to do more about it, to stem that flow, to better protect their land as well.”

Roemer added that it is his hope the Tribe will work more with state officials.

As to complaints about the poor aesthetics of the shipping containers, border security “is not meant to be pretty; it’s meant to be effective,” Roemer told Harris.

It is also “extremely frustrating” to hear people who want to secure special events, such as political gatherings, “but they don’t want to secure the southwest border into the nation,” Roemer said.

Yuma County was not the only border area Roemer discussed with Harris during the interview. According to the Director, efforts are underway to make state funding available to help better secure Cochise County where some stretches of border have no effective barrier or wall.

The geography in most of those areas is mountainous, making it not a good match for the type of shipping-container temporary border barrier installed in Yuma County. Instead, Roemer says state funding will be made available to the Cochise County Sheriff’s Office for virtual technology instead of physical barriers.

Those funds are part of a $335 million appropriation signed into law by Ducey earlier this year. Cochise County Sheriff Mark Dannels can access some of that money for technologies such as drones, cameras, mobile units, and infrared night vision.

“We work really well with Sheriff Dannels and his team,” Roemer told Harris. “They utilize technology there about as well, probably better than anybody in the country. It’s really impressive.”

LISTEN TO THE ROEMER INTERVIEW HERE