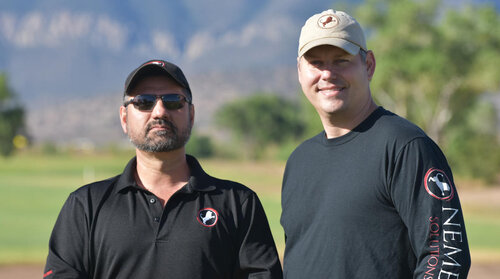 A Sierra Vista-based company which started with just one government contract in 2017 has been named to Inc. Magazine’s 5000 fastest growing private companies in America, ranking in the top five in Arizona and number 158 nationwide with more than 3,200 percent growth the last three years.

Nemean Solutions provides a variety of services to the U.S. military, as well as state and federal agencies in support of America’s Defense, Intelligence, and Aerospace sectors. It ranks #5 of the 154 honorees based in Arizona, with those companies accounting for $18.5 billion in total revenue and more than 12,000 jobs, according to the magazine.

The company’s three-year growth also ranked #4 of the 120 businesses nationwide in the Government Services industry to make the 5,000 list in 2022. They far outpaced their Arizona competitors MO Studio (ranked 2,088) and Vector Solutions (ranked 4,743).

Nemean Solutions was founded by Craig Mount and Simon Ortiz in Mount’s kitchen in Sierra Vista with plans to offer intelligence contracting at the U.S. Army’s Fort Huachuca. Today it employs nearly 80 full-timers and dozens of part-timers as a certified SBA 8a Native Hawaiian-Owned and veteran-operated company.

Mount, a former Sierra Vista city councilmember, told AZ Free News he and Ortiz started the company with $5,000. It then took six months for the two former U.S. Army members to get all the clearances necessary to work at secured military installations before receiving about $80,000 in contracts.

Two year later, Nemean Solutions had its SBA 8a certification which allows the company to receive sole source service contracts of up to $100 million per award. Today, Mount serves as president and Ortiz as CEO of the company which could end the year with more than $8 million in revenue.

“We want to thank our partners at Ho’okahua Hawaiian Foundation, our fantastic mentors at Trideum Corporation, our amazing banking team at Bank of America -Chris Patty, Christa Williams and Edward Spenceley- for putting the fuel into the machine, the ever patient Kelly McBride and her outstanding team at Global Dynamic Consulting, Inc. keeping the wheels on, and all our amazing industry teaming partners,” Mount said.

But most of all, he acknowledged “the Pride of Nemean” as he calls the company’s “incredible employees and their families who dedicate their professional time, energy, talent and experience to deliver Unbreakable Values and Superior Solutions to our nation’s military in fourteen states.”

“Mark Schmidt and his team at the Cochise College Small Business Development Center have been amazing in championing for Sierra Vista’s small business community and for us at Nemean,” Ortiz told AZ Free News. “Also, we would be remiss in not giving credit to Mignonne Hollis of the Arizona Regional Economic Development Foundation for helping us establish our headquarters in Sierra Vista.”

And the company currently provides vital Information Technology Services for U.S. Army CECOM, U.S. Army NETCOM, and the U.S. Navy through a leadership team which has over a decade of Department of Defense Joint Live, Virtual, and Constructive Modeling & Simulation and Experimentation Support.

In addition to the recent recognition by INC. Magazine, Nemean Solutions was the recipient of the 2022 SBA Arizona Small Business Development Center’s Success Award, the 2021 and 2020 HIRE VETS Platinum Medallion awards from the U.S. Department of Labor, and the 2021 SBA SBDC Arizona Veteran-Owned Congressional Business Economic Impact Success Story.