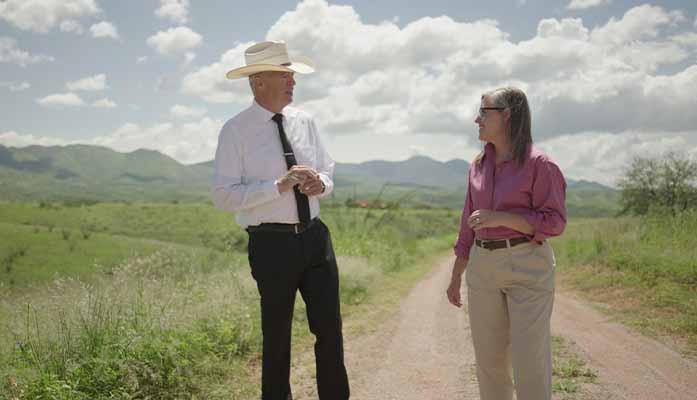 This week, Democratic gubernatorial candidate Katie Hobbs launched a campaign ad featuring a sheriff who denied the existence of the border crisis. Yet, Hobbs characterized the border situation as a crisis in her proposed plan to improve the border.

Santa Cruz County Sheriff David Hathaway denied that there was a border crisis last April when he rejected Arizona National Guard assistance for his county. Hathaway said that the only crisis Arizona suffered from was an economic crisis, seeming to insinuate that border restrictions prevented Mexican workers from contributing to the U.S. economy.

“We don’t have a migrant crisis on the border. We do not need to militarize our counties and have troops come to the border,” said Hathaway. “We have certain, very vocal sheriffs in this state who are trying to fan the flames on a supposed crisis.”

In the video, Hathaway said he was “tired of the talk” of other politicians and declared that Hobbs was the candidate who would take action.

Hobbs’ campaign video also featured Sheriff Chris Nanos. His remarks alluded to Hathaway’s past sentiments: that characterizations of the border as a crisis were overblown.

“She’s not here to politicize our border,” said Nanos.

Hobbs’ views on the border have resulted in mixed messaging. In May, Hobbs said it was “ridiculous” that the border was a core issue for the governor’s race. In the preceding months, Hobbs flipped on her support for ending Title 42. Hobbs initially supported an immediate end to Title 42 before adopting her current perspective that Title 42’s demise would be a “rash decision” and a “disaster.”

By comparison, Republican gubernatorial candidate Kari Lake’s border plan issued a lengthier plan. Lake proposed the establishment of an interstate compact in which a commission would oversee border operations. States in the compact would declare an invasion; create a border security force that would arrest, detain, and deport illegal immigrants; and buck federal restrictions and regulations from federal border enforcement agencies.