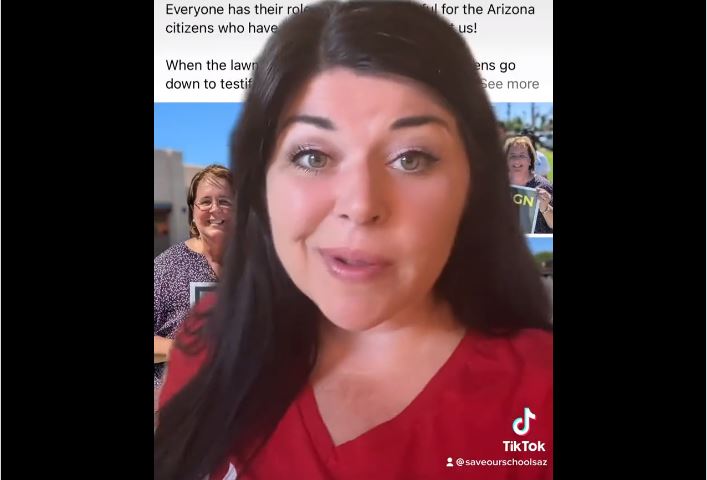 “They are all extremist lawmakers who are Trumpers and MAGA extremists,” said Lewis. “They are out here harassing our volunteers, surrounding 80-year-old women, calling businesses and lying, all to make sure that we don’t get to have signatures by this Friday to stop universal voucher expansion and keep public funding in public schools.”

“Expressing our beliefs is the foundation of democracy, not interfering with it,” said Ugenti-Rita. “Instead of name-calling, try using substantive and persuasive facts to sell your perspective. Otherwise, you simply come off as a simpleton.”

Lewis didn’t deny that false information was given to signature gatherers. Instead, she took issue that someone had recorded the SOSAZ activists secretly.

Several days after the SOSAZ activists’ remarks were leaked, Lewis issued an opinion piece in the Arizona Mirror to denounce universal school choice. Lewis called school choice a “grift” and “massive cash grab” by private schools, pushing one of the contested claims of her organization’s signature gatherers that the ESA Program lacks oversight.

“Universal vouchers mean the end of public education as we know it in Arizona,” stated Lewis.

If any lack of oversight exists, that would be because of Arizona Department of Education (ADE) Superintendent Kathy Hoffman. The superintendent is a vocal opponent of the ESA Program and supporter of the SOSAZ ballot initiative. Hoffman graduated from an Oregon private school.

When signing the SOSAZ ballot initiative, Hoffman claimed that the ESA Program she oversees has “zero accountability.”