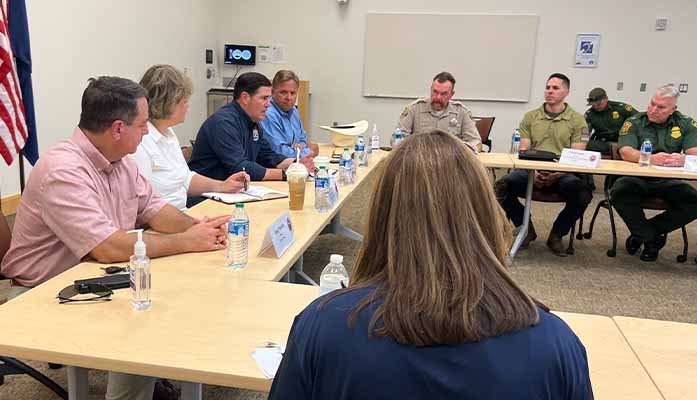 The shipping container “Border Barrier” approved by Gov. Doug Ducey earlier this summer along some previously unsecured sections of the border in Yuma County is fulfilling its promise, several officials reported Thursday.

The governor was in Yuma for an update on the effectiveness of the 130 double-stacked, state-owned containers he ordered put in place this summer to fill gaps in the U.S. border wall. His trip included an inspection of the project completed last month. The project was funded by border security legislation passed by state lawmakers earlier in the year.

The Arizona Department of Emergency and Military Affairs oversaw the project which closed off more than seven-tenths of a mile of border in Yuma County. That area of the border experienced 259,895 migrant encounters from October 2021 to July 2022 — a nearly 250 percent increase over the prior fiscal year.

President Joe Biden promised in July “to review” border security concerns and enhance barriers along the southwest border, but no timeline was provided. This lack of action, Ducey previously explained, was the impetus for his executive order to utilize the containers as a temporary border barrier.

“Five wide open gaps in the border wall near Yuma neighborhoods and businesses are now closed off,” Ducey said Thursday. “In just 11 days, Arizona did the job the federal government has failed to do — and we showed them just how quickly and efficiently the border can be made more secure – if you want to.”

The governor also took part in a roundtable discussion in Yuma with several local, county, state, and federal officials as well as business leaders and community members. Among those providing Ducey an “update on the ground” were USBP Yuma Sector Chief Chris Clem and CBP’s San Luis Port of Entry Director John Schwamm.

Ducey noted that multiple migrants illegally crossed the border “right in front of us” the last time he stood along the border in Yuma.

“Securing the nation’s southern border is a federal responsibility,” the governor noted. “A responsibility President Biden refuses to address. So Arizona filled the gap.”

Jonathan Lines of the Yuma County Board of Supervisors visited the Yuma “Border Barrier” with the governor on Thursday. He says the containers are working, as there have been less people attempting to cross in those areas.

Tim Roemer, Arizona Department of Homeland Security Director and the state’s Chief Information Security Officer, emphasized that crossing into the U.S. between official CBP ports of entry is illegal.

“The cartels have been taking advantage of the gaps in the border wall to surge migrants and overwhelm law enforcement,” Roemer noted.

Also Thursday, Ducey reacted to data released by the U.S. Department of Homeland Security that 748 deaths have been reported of migrants crossing the U.S. / Mexico border since Oct. 1, 2021. That number of deaths already far exceeds the 557 deaths reported from Oct. 1, 2020 to Sept. 30, 2021.

“This is a humanitarian crisis,” Ducey said. “Migrants making the dangerous journey across the border are faced with immense heat, crime and unfortunately, sometimes death. Enough is enough. That’s why Arizona is closing the border wall gaps.”

U.S. officials have not directly acknowledged the huge increase of deaths over the current fiscal year, which many border observers attribute to a lack of immigration law enforcement by the Biden administration. However, a CBP spokesperson appeared to put all blame for the rise in deaths on the cartels.

“Transnational criminal organizations continue to recklessly endanger the lives of individuals they smuggle for their own financial gain with no regard for human life,” according to the CBP statement. “The terrain along the border is extreme, the summer heat is severe, and the miles of desert migrants must hike after crossing the border in many areas are unforgiving.”